In the beginning was the mark 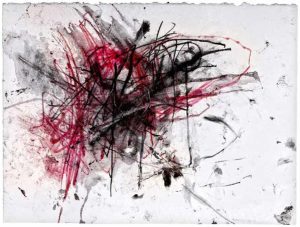 Frances Aviva Blane has been included in 60 out of 2,700 applicants as an exhibiting artist in this year’s John Moores Painting Prize, the UK’s best-known painting competition. The exhibition, a key strand of the Liverpool Biennial, will be at the Walker Art Gallery from July to November 2018.

For Blane, it’s been an annus mirabilis.  She has featured in a solo show Two Faces: paintings/heads at the Germany Embassy in London, as well as two group shows, Human, also at the Embassy, and No Man is an Island in Bonn.

In her recent works on paper, and in common with many contemporaries, Blane subverts the notion of what drawings can be. They are not preparations for other things. They are complex, layered artworks, laws unto themselves, each one with a different mood and structure.  Yet, at the same time, they retain that quality of spontaneity and the accidental.

The fourteen drawings that appear in her new book, MORE, are all called – unrevealingly! – Untitled.  Many are bold; all are striking images; each one has its own rhythm.

Untitled 1, for example, captures the energy of the artist’s hand in motion, as red and black lines slash across the sumptuous Fabriano paper, sometimes penetrating the surface. The cherry red pastel is slashed into loops and splatters. It seems to erupt from its thickly-worked nexus of red and black. 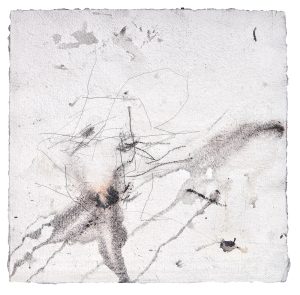 By way of contrast, Untitled 4, made with pencil, acrylic, charcoal on hand-woven natural fibre cloth (khadi) is extremely delicate. The lines are lightly traced. Some appear as accidental smudges. A more solid, darker mark has a faint orange glow, as though something is burning. Shadows loop and dribble. In close-up the weave of the paper catches and pixellates the charcoal creating yet new textures and patterns. Somehow, there is a wistfulness and heartache in these minimal marks.

Untitled 14 exploits the charred velvety quality of charcoal and the threads of khadi paper to create a troubling mystery. The black is pushed into and behind the weave of the paper, disappearing and re-appearing through the tracery of warp and weft. Something is being obliterated and yet it returns to haunt us.

We now know that drawing and painting  began much earlier than hitherto understood. In February this year, researchers found wall paintings in Spanish caves made by Neanderthals some 65,000 years ago. More than ever, it’s clear that becoming human was inseparable from making marks, signs and images.
The marks are completely non figurative and only distantly allusive, but we know and feel that they emanate from a human heart and mind. However abstract, they cohere and become vehicles or metaphors for endless possible feelings and thoughts. In his insightful essay about Frances Aviva Blane’s work, critic Mark Gisbourne draws attention to the drawing impulse as a “pre-linguistic human craving”. 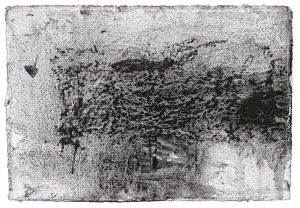 There is an immediacy about the very act of making charcoal, chalk or pencil marks that can endow even a scrap of paper with a special quality of connection between you and the mind of the artist. The proverbial sketch, scrawl or notation on a paper napkin – isn’t it a thing of the moment, setting down ideas that could otherwise be lost? As Gisbourne notes, drawing thus becomes “an extended signature by other means. It is the expressive DNA, so to speak of lived creative intention”.

As Tess Jaray has said, painting is about understanding the world and Expressionism is about understanding ourselves. When we go through traumas, communication can be interrupted, obscured, confused and even violent. Ordinary language becomes inadequate and we struggle for new forms of expression to reach out and say something new.

Something can be there and then it is hidden, blocked off.  A face loses some of its features, decomposes, is deconstructed. The break-up of the paint becomes synonymous with the mental and emotional.

Blane has an uncanny ability to tap into the subconscious embraces that element of “automatism” which the Dada movement and the Surrealists as well as many others like Paul Klee borrowed from psychology, as a way of tapping into non-linguistic communication and the subconscious.

Whilst of our time, her painterly abstract expressionism comes with an embedded absorption – that is to say, a painterly knowledge – of the movements and discoveries that transformed art history before, alongside and after the American experience.

Her drawings can be in sharp contrast to her paintings.  She switches between drawing and painting.  She is the most deliberately abstract, non figurative of artists and yet she returns to the human face, almost always her own, as a form of discipline – a visual-psychological exercise.

This is art of the now. It’s about the trauma of being alive in the world today with its attendant pressures, as Blane has said. She touches hidden parts of our psyche, constantly challenging us to feel more and think more. There is tension and brashness and there is vulnerability, horror and delicacy.

Finding her place in history

Jaray, who taught Frances Aviva Blane at the Slade School of Fine Art, places her firmly in “the great stream of Expressionist painting that emerged early in the 20th Century in Germany”. As Jaray says, the pre-World War One German Expressionist movement reappeared in a transformed way in the Abstract Expressionists of America, and Blane has picked up on this through a form of Painterly Abstraction.

Abstract Expression was itself influenced in one way or another by the inter-war phenomenon of Surrealism. Its great high priest Andre Breton wrote at the end of his 1928 novel Nadja that: “La beauté sera convulsive ou ne sera pas. Beauty will be convulsive or not at all.” Surrealism paved the way in exploring the subconscious as a major source of inspiration. It undermined the notion that art had to tell a simple story or depict. And then came World War II which further disrupted life and art. 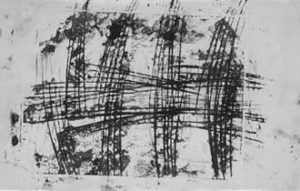 Surrealist preoccupations re-emerged in new ways after the war, in Paris and elsewhere. Artists like Wols, the German lyrical abstractionist, also described as an Existentialist, remained unsung in the Anglo-saxon art world – certainly in Britain – until Frances Morris curated the Tate Gallery’s pioneering Paris Post War show in 1993. It was the first time that the existence of Art Autre (Other Art) or Art Informel came to a wider UK audience. Although shown by pioneering artist and gallerist Denis Bowen, the Informel movement remained a well-kept secret.

In France it was championed by the critic, Michel Tapié. Brilliant exponents of the Informel included Bowen and Sandra Blow in the UK, Alberto Burri, Pier Achile Cuniberti in Italy, Antoni Tàpies in Catalonia, to mention just a few. The high-impact COBRA group of artists from Brussels, Copenhagen and Denmark embraced Marxism and championed a complete freedom of form and colour as well as political commitment. Its members included Pierre Alechinsky, Karel Appel and Constant.

But the big names in the canon, from Picasso to Pollock to Bacon and Freud – almost invariably white males – continued to dominate the art world, the media and the art market in the 20th century. In the UK, Gillian Ayres was the only woman amongst the 18 artists who featured in the historic Situation show mounted by critic Lawrence Alloway in 1960. But in the years running up to the Millennium things began to change as hitherto marginalised female artists gained long overdue visibility. 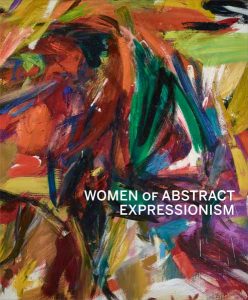 In 2016 Denver Art Museum in the US mounted its powerful The Women of Abstract Expressionism to right some of the wrongs of history. In recent years, Eurocentrism has been cast out, with Tate Modern giving solo shows to artists like Mira Schendel, Mona Hatoum and Saloua Raouda Choucair. Its current hang includes much neglected post World War II protagonists of abstraction and the Informel from around the world featuring a number of women.

The American website Hyperallergic focuses on art politics and gives voice to a whole range of female, African-American and outside the ‘mainstream’ talents. And it’s just one of many new internet platforms, including those created by artists themselves. And Victoria Miro is currently showing the work of 20th century female abstractionists from across the globe in both her London galleries.

Now, deep into the 21st century a much wider and more varied ecology is becoming apparent. There is a sea change with the rise and rise of a many-facetted artistic Other – discovered and promoted by a new breed of women curators, writers, museums and galleries. A host of previously muffled, hidden and suppressed voices are bursting on the scene. This global phenomenon allows us to understand Blane’s contribution in a wider, global context.

MORE – Frances Aviva Blane, with an essay by Mark Gisbourne, is available to download and from Amazon

German expressionism’s night at the embassy