Trump: from democracy to tyranny 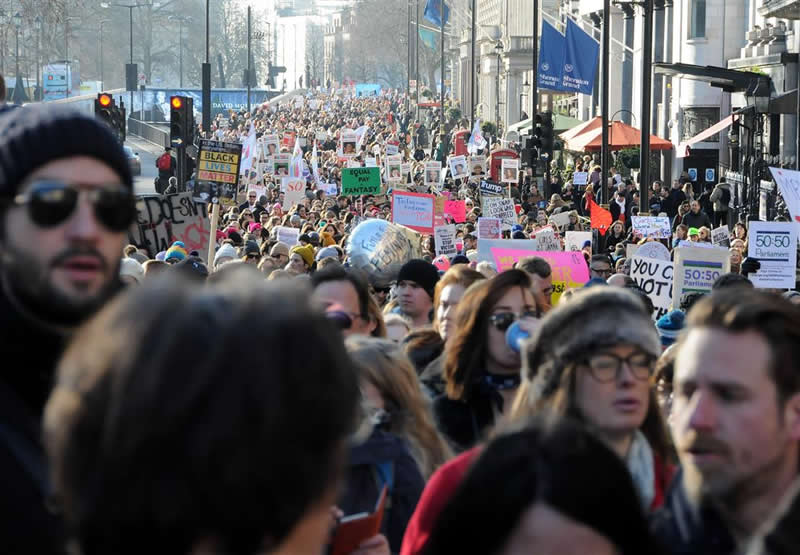 So, Donald Trump is now President of the United States of America, and its Commander-in-Chief.

In his inaugural speech, Trump made no reference to his party, Congress, or any other means by which he expects to accomplish the sweeping change he promised. Instead, he once again promised that he personally will deliver a national restoration: “I will fight for you with every breath in my body – and I will never, ever let you down,” he said. “America will start winning again, winning like never before.”

As the American people – and the rest of us around the world – awake to a living nightmare, the revolt against Trump is gathering pace. Hundreds of demonstrations and protests in the US and around the world show Americans will not take this lying down.

Abandoned by a pathetic Democratic Party – itself in bed with the likes of Goldman Sachs – and after eight years of Obama doing very little except shore up the system – they are taking to the streets.

Those hoping for work refurbishing America’s crumbling infrastructure built in the 1930s during Roosevelt’s Second New Deal will be disappointed with what will be on offer. Labour will be priced at the world’s lowest levels, competing with robots.

Trump’s election marks an ending of the American democratic process. He personifies the merging of corporate and political matters into a corporatocracy. Democracy, as Americans have known it, is now the form for something quite sinister and dangerous. His inauguration marks a move from democracy towards tyranny.

In 1776, thirteen American colonies, in the midst of a revolutionary war with the Kingdom of Great Britain declared their independence from British rule and formed a new sovereign nation – the United States of America.

The famous second paragraph of the Declaration of Independence asserted the principles of equality, democracy and the right to revolution. Today these sentiments continue to course through the lifeblood system of Americans.

We hold these truths to be self-evident, that all men are created equal, that they are endowed by their Creator with certain unalienable Rights, that among these are Life, Liberty and the pursuit of Happiness. – That to secure these rights, Governments are instituted among Men, deriving their just powers from the consent of the governed, – That whenever any Form of Government becomes destructive of these ends, it is the Right of the People to alter or to abolish it, and to institute new Government, laying its foundation on such principles and organizing its powers in such form, as to them shall seem most likely to effect their Safety and Happiness.

Today with Trump’s assumption of power you might call it the USexit.

Brexit and the election of Donald Trump share a common cause. Many people argue that they are the consequence of globalisation, the transfer of jobs to distant countries, and the consequential decline in living standards. But that all happened decades ago. In 2005, capitalist growth through the globalised production, inflated by credit and debt, reached its limit.

Attempts to restore growth to anything like its pre-crash levels despite more mountainous injections of credit and savage cuts in government spending have not solved the debt crises. As the rich got spectacularly richer, workers in Britain and the US ‘middle class’ were driven back. As this historic failure dragged on workers in the abandoned wastes of American and British manufacturing increasingly rejected political leaders like Clinton associated with the corporate elites.

When the opportunity came – the Brexit referendum in Britain and the election in the USA – the disaffected in both countries surprised the world by the scale of their rejection of the establishment.

Now the world is engulfed in a universal crisis of democracy, where the old state system based on representation is unsustainable, unable to cope with a lengthening list of global threats – with climate change at the top. Even before Trump had left the inaugural ceremony every mention of global warming had been wiped off the White House website.

The global economy, still drowning in unrepayable debt, will now be subjected to trade wars between US and Mexico, US and China and US and just about everyone else, as Trump tries to fulfil his promise to repatriate profits and jobs. Rex Tillerson, Trump’s incoming Secretary of State, is making direct threats to China over the Spratly and other islands, as the trade war threatens to take on a military form.

Trump was elected according to the rules of the democratic process established in the late 18th century – in the constitutional process defined by the Founding Fathers, and documented in the 1787 Constitution, the first of its kind in the world.

But Trump received 2.9 million votes less than Clinton his nearest rival. According to some estimates, as many as 75% of those old enough to vote didn’t vote for Trump.

According to John Woolley, professor of political science at UC Santa Barbara, historical analysis shows Trump failing in terms of democratic legitimacy more conclusively than in any presidential election – other than that of John Adams in 1824. This doubt over the legitimacy of the new president throws the legitimacy of the whole constitutional process into doubt. That’s (at least partly) what’s meant by a constitutional crisis.

And the Trump regime is busy testing the US constitution to breaking point. Not least persuading Congress to stretch the rules so that retired General James ‘Mad Dog’ Mattis could be nominated as Secretary of State for Defense.

Although he has made his choice of those he wants in his Cabinet, it will take time before, one-by-one, the hundreds of appointments needed for the administration can be nominated and then approved or rejected by the Senate. That will suit him well, using rule by his family, bypassing Congress altogether, issuing proclamations by Twitter.

The separation of powers in the 1787 constitution, the checks and balances built into it to defend its version of representative democracy, look set to be sidelined by Trump’s Bonapartism. Having been brought out of retirement, it’ll be interesting to see which way Mattis swings in view of his advice to “Find the enemy that wants to end this experiment (in American democracy) and kill every one of them until they’re so sick of the killing that they leave us and our freedoms intact.”

A look at others on the list of those he has selected so far tells us a lot about the state of democracy in the US.

There’s a stunning irony of Trump’s choice of billionaires. There’s an even greater irony given Trump’s appeal to those who’ve suffered from the capitalist trajectory of growth and decline. The inauguration occurs in the week when news came that 8, mostly American men now command more wealth than that of half of the world’s population. The inequality gulf is not just expanding. It’s accelerating.

Trump is riding on his vision of making America great again which has captured many of those ‘left-behind’, balancing between populist nationalism and sections of the Republican Party and a group of billionaires. He has come to power, nonetheless, through the US electoral process.

In the wake of a lack-lustre inauguration, opposition to his presidency is being organised with unprecedented determination. As Michael Moore, Julianne Moore, Robert de Niro, Alec Baldwin and the hundreds of thousands marching today indicate, a movement can be built. It’s a moment that cannot last but that allows a window of opportunity.

The centre of the struggle for real democracy has now shifted to the US. All eyes on America and all support for those engaging in struggle which can only succeed through a new American Revolution, picking up where the 18th century pioneers left off.