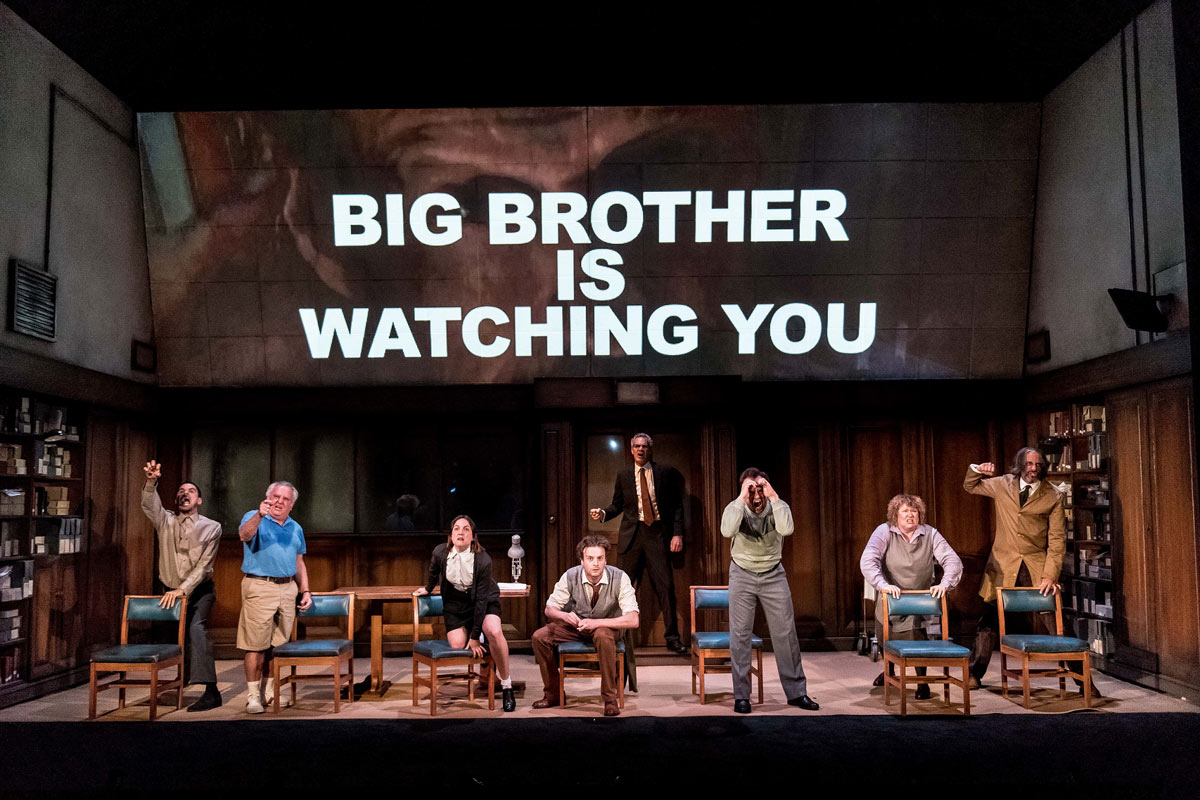 Parallels to present-day Britain must echo in the heart like the hammer hitting the anvil in this production of George Orwell`s 1984. There are, along the way, blinding lights and screeching sound effects that keep alive the reality of enhanced interrogation as a very real danger–a direction along which the the West has been travelling in recent years.

You only have to have shuddered at Teresa May’s Snooper’s charter, the “Go home” vans and the pledge to withdraw from the European Convention on Human Rights; or dwell on Snowden’s revelations, to recognise that George Orwell’s work is not so much a work of future visions but a realisation that these are forces which must be continually worked against.

Iconic moments stand out in this play. Words from Newspeak slogans hang, like the most unarguable concrete poetry, and stand brutishly, in immaculate pristine monolithic glory as if reporting straight out of an eternal spring.

We constantly question reality in the play, whether Winston is a product induced into a flowering, a small green flowering of a rebellion, that will be crushed – to meet a quota of proof that various functionaries must meet to keep their role in the opaque apparatus of Airstrip One’s state.

At least with a god, you can rile and rebel, in the dystopia created before us … Here the protagonists vainly search for a confirmation that Big Brother actually exists, while agents of the party provide or manufacture a book written by a near-mythical dissenter criticising the very methods of the Inner Party of Airstrip One.

The play is successful in suggesting that these artifacts are golems of a sort, that carry on their logic and function ad infinitum.

A kinship can be discerned in Harold Pinter’s concerns about power dynamics and language, and in George Steiner’s thoughts in the Barbary of Ignorance– in which he points to the traces and absences in a language can help pinpoint the fault lines that exist in a culture, and the truths and hard realities it wishes to avoid,  The ideological is at its strongest when it is invisible and appears non-existent (as it is the frame and reality).

Fresh and stripped to its raw essentials, this adaptation has a clarity and driving force. Taking the decisive step to construct the play around the appendix Orwell created for the novel, the sense is that we have gained entry to a truer version of Orwell’s masterpiece–One where truth, time and memory are set in an untethered world, and where its citizens suffer the anxiety of lost coordinates and the terrifying experience of trying to remember exactly what it is they are supposed to forget.

When Winston Smith writes the date of his first diary entry, it is live-projected onto the giant overhead screen, sending chills downs the spine. It’s a highly concentrated moment, intimate and fascinating…and yet just a humble everyday act. It’s this little act where the whole totalitarian structure of 1984 is revealed and laid bare–in a place where one doubts even the privacy of ones own mind.

Inserted into the present, it becomes an intimate act of mind and self discovery.  Winston sees himself for the first time, as a true reflection–though not complete as his own script-story must go on, and this extension of his hand makes a part of himself new and unrecognisable. His writing is a sort of  ‘found object’, the cornerstone from which he actualises himself, realising what is alien to himself. It is tempting to infer that for Orwell the act of writing contained in it a sacred part of himself and a duty to personal and community freedom.

Throughout the play the personal is projected out into a wider field, via the Screens that sit above the stage – echoing Artaud’s Theatre and it’s double…Echoing out confused and self voyeuristic selfie mobile phone habits.