Alt-facts, fake news and all that jazz!

When I was ten years old a helicopter crashed in a field next to my house.  I was playing in the field at the time with two friends.  We were eye witnesses to the crash and were understandably eager to scan the news reports of what was a big event in our small village.  We were surprised to find that the media reports bore little resemblance to what we had seen.  For the first time I understood what news stories were.  They are just that, they are stories.  They have an angle, they get embroidered; information gets overlooked, suppressed, massaged and manipulated for all sorts of reasons. 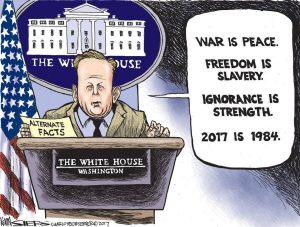 Alt-facts aka Fake news at the White House

Wikileaks prides itself on 100% accuracy in the data which it releases, in that it comprises factual information.  But the minute the individual journalists and the array of new outlets get hold of it they inevitably whittle away the data’s veracity by selecting and slanting it to fit their own agendas.  Other media outlets will go on to construct reports from these secondary sources and thus further distortions will occur, and so on.  Whatever news stories comprise they are not the truth.

News reports will go through another set of ‘distortions’ at the hands of the recipient.  Each person has a unique mix of biological, social, cultural, cognitive and affective characteristics, the interaction of which will result in a unique understanding and interpretation.  Ideally such diversity would be nurtured as a positive aspect of what it is to be human, but for the controlling elite such unharnessed complexity creates risk; it may lead to more people thinking about things and, even more dangerous, such thinking may generate new ways of seeing the world.  It may give rise to new ideas that could threaten the status quo.  I suspect a large chunk of the many ‘fact-checkers’ and ‘truth-tellers’ that have sprung up in recent times amount to no more than a cynical attempt at quashing such subversive risks; a scramble to re-gather the reins and return to the Halcyon days when groupthink was more easily manufactured by the establishment.  Some truth-tellers may genuinely believe that they are the antidote to fake news.  But why should any of them be believed?

Facebook and Twitter have their own ‘fake news detectors’ and have joined forces with thirty major media outlets to combat ‘fake news’.  Google has recently introduced its own fact checker service. It has also designed an algorithm that filters out ‘low level content’ from its search engine results.  What is ‘low level’ content?  The effect of this filter is by no means clear.  One of Google’s subsidiaries, Youtube, has updated its terms and conditions so that it now demonetarises any videos that contain ‘controversial content.’  That is it does not attach any advertising to such videos and thus denies the uploader an income. What does controversial content mean?  Anything that the Youtube moderation process says it is.  The BBC had its own way of peddling the ‘truth’ through its ‘fact checker,’ platform during the EU Referendum.  During the recent US presidential election numerous ‘fact-checkers sprung up to both affirm and deny the truth of almost everything that Hilary Clinton and Donald Trump said during the campaign.  All of these entities risk becoming variations of Orwell’s Ministry of Truth. 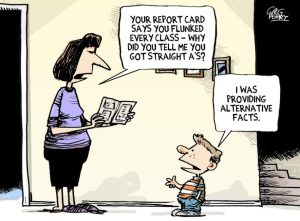 Jimmy Wales, the founder of Wikipedia is the latest to get into the truth-telling business with the announcement of his intention to launch a platform later this month (May 2017), declaring: “The news is broken, but we’ve figured out how to fix it.”  This is a disappointingly arrogant and naïve comment from someone who has spent years wrestling with the difficulty of maintaining the integrity and credibility of Wikipedia in the face of an array of organized and ad hoc attempts to ‘re-write the facts’.  His new website, Wikitribune,  will not carry advertising and instead is to be funded by subscribers and contributors and will comprise of paid journalists and volunteer writers from ‘the community.’  Whilst all this may be laudable, it hardly amounts to robust protection from fake news.  The Wikitribune website states that: ‘articles will be authored, fact-checked and verified by journalists and volunteers working together, while users will be able to flag up issues and submit ‘fixes’ for review.’  A bit like Wikipedia then?  And no doubt Wikitribune will suffer similar difficulties and pitfalls.

Instead of joining in the stampede of truth-tellers Jimmy Wales could have made a more difficult, but perhaps more constructive, intervention in this saturated market.  He could have devoted his new website to equipping people with techniques to evaluate different news sources; helped them to develop critical thinking, rather than offer them yet another version of the truth.  I can’t see how any good can come of Wikitribune as currently conceived.  It will either fail on its own terms, in that people will reject its self-proclaimed sanctimonious credentials.  Alternatively, if people are gullible enough to believe that Wikitribune represents truth, the deception will be complete and Jimmy Wales will be able to proclaim the Second Coming: ‘I am truth’ and everyone can finally abandon Earthly pursuits and put their faith in the supernatural.

The word truth is more appropriately confined to the spiritual or religious realm, or utilized in philosophy to encourage intellectual discourse.  There is little that is black or white in politics, but rather there are infinite shades of grey.  It is this mass of grey which is the real battleground of the truth-tellers, not verifiable facts.  If truth has any role to play, it should be couched in the notion of ‘seeking’ rather than ‘finding’; truth as a journey, rather than a destination.

So where does this leave the individual who would like to engage with the world to understand it and/or to change it and wants to find some reliable sources of information upon which to base such laudable efforts?  In undertaking such a quest one might venture beyond the media in all its exotic forms.  Perhaps such enlightenment can be better discovered in birdsong, or reading a good novel, or observing a painting, or some other work of art.  Imbibing art, culture and the natural world may stimulate new and powerful combinations of neurons which could be harnessed to better understand the world and our place in it.  Such mind stimulating pursuits might lead to a break out from the stultifying political agenda manifesting itself in such inane statistics as: gross domestic product, deficit, debt, government spending, employment statistics and all the other vacuous nonsense that the mainstream media spew onto the population every waking minute of the day; acclaiming it to be the one and only way of looking at the world.  Such a breakout from this conventional mindset might lead to a push for alternative priorities; such as finding ways to save the Great Barrier Reef, the largest living organism on the planet and which is in danger of extinction through repeated annual bleaching due to global warming; or safeguarding the remnants of the rainforest upon which we all rely for our existence and which, at the current rate of destruction, will be annihilated in around forty years time.  Through such combined efforts we may even begin to slow the current and perhaps final phase of human existence, the 6th Mass Extinction of Species.

But some part of this ‘survival strategy’ is likely to require delving into the output of the media.  I think in this regard healthy skepticism provides a good place to start: avoid any false Messiahs proclaiming that they are the truth; scrutinising the messenger, as well as the message, is important.  Who, or what, are they?  What overt and covert allegiances, agendas, objectives, do they have?  What political affiliations?  What funding sources? etc. etc.  Rather than passive recipients of the information, become active, critical and challenging in order to make informed decisions about the veracity of the information.  The media outlets could make this task easier by providing meaningful information about their pedigree, rather than meaningless concepts like ‘editorial independence,’ why not give the consumers relevant data upon which they can make a judgment for themselves.

Objective evaluation of media outlets is only part of the answer.  It also requires introspection.  We are all biased, prejudiced individuals who tend to select information which reinforces our partial view of the world.  For this reason it would be beneficial to force oneself to make some choices that are counter-intuitive, where the media output is incongruous to our own mindset, where the views expressed are juxtaposed to one’s own; perhaps even where we find such material offensive.  All this requires time, thought and effort.  Little space is conceded to such endeavours in our frenetic society and there is no inclination by those in power to alter this state of affairs.  The last thing the establishment wants is active thinking citizens.  Such emboldened citizens might decide they want to change things!

The ‘truth-tellers’ could help to drive a small wedge in this relentless dumbing down under an avalanche of content.  Jimmy Wales, and others, could ask people to put their money and effort into developing critical thinking skills; equip them with the means to evaluate the media, rather than asking them to pay for their own propaganda.  Why not help to develop mature citizens, rather than regressing them to infants with false idolatry?

About the Author: Tim Hart

Where are the trade union leaders as job massacre continues? Their silence is deafening. Inaction us shameful.
https://www.bbc.co.uk/news/business-53687338

I urge support for ⁦@pcs_union⁩ ISS members on Merseyside in month-long strike for fair pay & sick pay. Surely the Covid pandemic has taught us all, even HMRC, the important role cleaners play. Let’s get behind these low paid workers. https://www.pcs.org.uk/news/iss-members-on-merseyside-in-month-long-strike-for-fair-pay

Only if you thought Starmer would somehow preserve Corbyn's legacy would you be surprised by events.

Starmer sabotaged Labour’s Brexit policy and made it unintelligible to voters.

His support for the manifesto was hardly enthusiastic.

He is not a socialist future.

A visionary artist says the pandemic is a chance to move to a different kind of society. My appreciation of David Downes lockdown paintings. https://realdemocracymovement.org/the-covids-are-coming/ @democracyOK @ZuleikaGallery @DylanStrain

@CorinnaLotz @GeorgeMonbiot @democracyOK Actually it is ecological in that everything is connected and affects everything else. The current system is so malignant, and that it's quite impossible to unpick what is wrong i.e. it's a complete mess. It is impossible to use a sticking plaster approach to fix it.

Where are the trade union leaders as job massacre continues? Their silence is deafening. Inaction us shameful.
https://www.bbc.co.uk/news/business-53687338

I urge support for ⁦@pcs_union⁩ ISS members on Merseyside in month-long strike for fair pay & sick pay. Surely the Covid pandemic has taught us all, even HMRC, the important role cleaners play. Let’s get behind these low paid workers. https://www.pcs.org.uk/news/iss-members-on-merseyside-in-month-long-strike-for-fair-pay

Only if you thought Starmer would somehow preserve Corbyn's legacy would you be surprised by events.

Starmer sabotaged Labour’s Brexit policy and made it unintelligible to voters.

His support for the manifesto was hardly enthusiastic.

He is not a socialist future.

A visionary artist says the pandemic is a chance to move to a different kind of society. My appreciation of David Downes lockdown paintings. https://realdemocracymovement.org/the-covids-are-coming/ @democracyOK @ZuleikaGallery @DylanStrain

@CorinnaLotz @GeorgeMonbiot @democracyOK Actually it is ecological in that everything is connected and affects everything else. The current system is so malignant, and that it's quite impossible to unpick what is wrong i.e. it's a complete mess. It is impossible to use a sticking plaster approach to fix it.