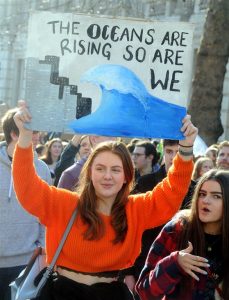 – Halt all public subsidies for oil and gas extraction, including fracking and north sea oil and gas

– In the short term, levy a tax on the Big 6 energy companies, capping their profits and putting the income generated into a transition bank to pay for a rapid – not snail-like – switch to renewables.

– Put together a medium-term strategy to take the Big 6 back into public ownership to facilitate joined-up energy planning, i.e. smart grids, hyper-local energy plans using the nearest most efficient resources to generate power.

– Strict regulation of all new construction, making them as close to zero carbon footprint as possible.

– Start up funding for workers’ co-operatives to deliver these changes (Cleveland, Ohio); creating thousands of jobs particularly for those formerly employed in the oil and gas industry and coal mining areas.

– Every business required, as part of their annual report, to quantify how they have changed production, buildings, transport and distribution and energy use, to meet carbon reduction targets for their industry, and a tax levied proportional to their failings.

– Cars out of city centres with park and ride, and create public transport/cycle-only boxes in the centre of cities

– Use Uber-type technology not to facilitate more taxi rides, but to support car pools and car sharing schemes

– Set upper limits on total flight miles in and out of Britain and distribute them fairly through an air miles system; halt airport expansion

– Local energy co-operatives not selling power to the grid but using the power to cut bills.

– Support farmers to switch to organic, by ensuring that subsidies focus on environmental and health benefits, and not industrial agriculture