Climate change is destroying the soil we rely on 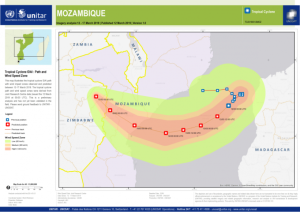 Mozambique will struggle to ever recover from the impact of Cyclone Idai, with “inland oceans” forming and the main port, Beira suffering 90% damage. Beira is crucial not only for Mozambique but also for landlocked Zimbabwe and Malawi. Mozambique is already the world’s second poorest country with all the inheritances of Portuguese imperialist rule to contend with. Significant GDP growth achieved in recent years will be wiped out by the costs of the storm.

The floods (which also caused serious damage and loss of lifein Zimbabwe and Malawi) continued to rise for many days after the cyclone, as water drained down from the highlands. More than 1,000 Mozambiquans have died, 18 hospitals have been destroyed, at least 400,000 people are homeless. Areas are cut off; roads and bridges have been swept away.

Emergency aid, crucial though it is, cannot solve this problem. The sheer force of the cyclone is likely to make permanent some changes that have been happening to Mozambique over the last two decades, including coastal erosion and increasing salination of farmland. Not only this season’s crops but much topsoil have been washed away. Salination will cause long term damage; habitats and eco-systems will be permanently changed – including human habitats.

Cyclone Idai was the worst ever recorded but it was only the most recent of a series of sub-tropical storms which since the start of the 21stcentury have been intensifying in frequency and severity. 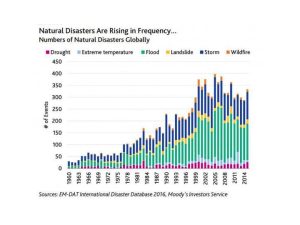 Washington Post recently reported from Hyde County, North Carolina, which was inundated by the storm surges of Hurricanes Mathew in 2016 and Florence in 2019. Big areas of the County are now infertile due to salty land. Sea levels are rising along swathes of the US coast, in some areas at a rate of 4.4mm per year. Drought is causing a soil crisis in Western Australia, where 1 million hectares of agricultural land is severely affected by salt. In sub-Saharan Africa, Bangladesh, Iraq and Iran the soil crisis is affecting food production and livelihoods.

Continuous heat spikes over recent years have transformed Iran’s Lake Urmia from a freshwater paradise to a salt flat. What was a rich bio-diverse lake fed with fresh water from the oak-forested hills on the Iran/Iraq border had already been undermined by increased water extraction and deforestation. Then a series of unprecedented droughts and heat spikes gave the ‘coup de grace’. Now the lake is dead and salt blows in dust storms over surrounding farmland making it unusable.

I read about this in a feature by Photojournalist Ako Saemi who is recording the impact of climate change on Iran; you can see some of his pictures here in the New Yorker, including a heartbreaking image of a rusty anchor sitting on salt flats where once professional anglers fed their families – not just human fishermen but also a wide range of birds.

Just over the border in Iraq, to add to the misery of the outcomes of the Western invasions and civil war, it is estimated that 25% of irrigated farmland — 2 million hectares — is so salty it won’t grow crops. The irrigation channels are still there – but the acquifers have been salinated.

The governments of Iran and Iraq facing unprecedented high temperatures; they are no climate change deniers and are working hard to overcome the problems, whilst remaining committed to the capitalist growth model, and both are very aware of the impacts of climate change. The Australian and US governments deny climate change is happening, but still it happens!

Karl Marx once wrote that the whole basis of capitalism is the impoverishment of the soil and the people and he added: “Man lives on nature– which means that nature is his body, with which he must remain in continuous interchange if he is not to die. That man’s physical and spiritual life is linked to nature means simply that nature is linked to itself, for man is a part of nature.” Nowhere is this clearer than in the interdependence of human beings and the soil.

Unfortunately we are not living in a system that recognises this fundamental relationship, and makes it the basis for industry and agriculture and social organisation. Rather we suffer under a capitalist stupidocracy for whom alienation is a religion, inequality a given and eco-destruction an irrelevant side issue. The millions of people in Mozambique now trying to work out how to go on, are only its latest victims.

But not to leave on that gloomy note, all over the planet agriculturalists are working on ways to overcome soil loss, reforest crucial areas and reclaim land destroyed by overuse of artificial nitrogen fertilisers. There is absolutely no doubt that we can reclaim the soil, and make it productive again. But to do it we have to reclaim it from private ownership for the whole of humanity in a new model of common ownership based on a conservative, organic model of agriculture.