Democracy reboot through a crowd-sourced charter 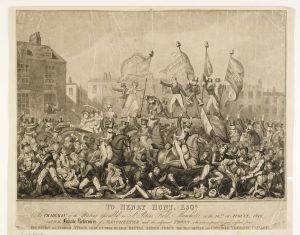 This print focuses on the women reformers, who came to the meeting dressed in white. Four women were amongst the 18 dead of Peterloo.

In the radical spirit of the great reform movement, the Manchester People’s Assembly for Reform has launched a digital brainstorm to crowd-source ideas that rethink democracy.

Six Acts to Reboot Democracy launches this weekend as part of the celebrations/commemoration of the Peterloo Massacre.

The original People’s Charter was crowd-sourced too – at thousands of meetings across the whole country. People came together to agree demands for political rights, terrifying the establishment in the process. It was fear of the people, and of giving up any ounce of privilege, that led to the brutal assault on a massive but peaceful demonstration. On Monday 16 August 1819, cavalry charged into a crowd of 60,000–80,000, killing 18 people (including one child) and leaving hundreds with terrible injuries from sword blades.

Today’s Manchester reformers say it is time to take up the fight for democracy one again, and they have issued a call out for ideas under the following headings:

Real Democracy Movement has responded with these suggestions:

Under heading 1: Reforms for voting systems and how voting is conducted

Convene a citizen’s convention on the Constitution: A Convention that reflects our diverse society and the nations of the UK would draw up a new constitution and organise for it.

Under heading 2: Reforms to political conduct

Design a new definition of “politician”: Counterpose the concept of the citizens’ delegate to the idea that a seat in Parliament is a career for life.

Under heading 3: Reforms to ensure the accurate dissemination of  information

Establish a People’s Tribunal for media and transparency: Get expert help on data mining, social media, and fact checking, to e 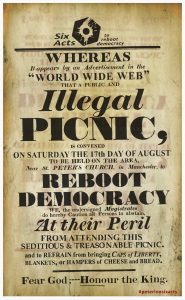 xpose “fake news”, manipulation and the interests served. Tribunal would also help the Convention communicate its message and promote its work.

A People’s Parliament : A forum of  delegate citizens elected by local and regional  Assemblies established to campaign for constitutional and political change

The organisers hope that there will be a whole host of ideas to consider and vote on. All the submissions will be posted on an online voting platform, and anyone aged 16 or over can choose their favoured Six Acts.

They say: “We can all use this document as a mandate to push for the redesign of a democratic system that works for us. Together we can break free from the shackles of an archaic and unbalanced political system.”

RDM has a stall at “Sedition Corner” at the Six Acts Illegal Picnic on Saturday August 17. Come along and tell us what you think of our ideas and add your own.