From private parkland to people’s playground 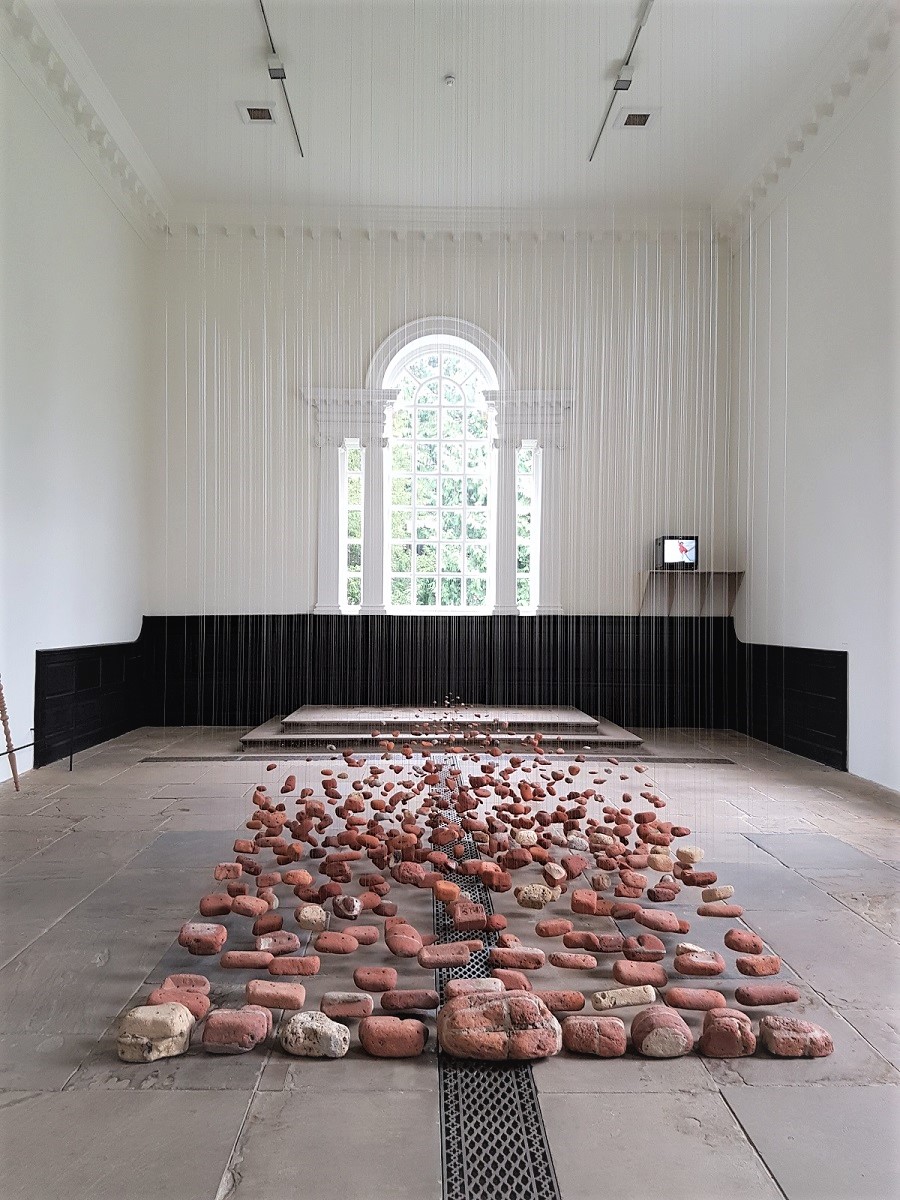 Neither From Nor Towards by Cornelia Parker

Celebrating its 40th birthday this year, Yorkshire Sculpture Park is going from strength to strength.

Today’s 500-acre site once belonged to the aristocratic Wentworth family. They fought for the King against the Parliamentarians and were rewarded for their services after the restoration. In the 19th century, the Wentworths went on to make a fortune from the coal underneath their lands.

But today, thanks to the vision of founder Peter Murray, once a lecturer in the college on its grounds, and a great team, this former symbol of aristocratic power is transformed into a true people’s garden of delights, open free to the public.

The gardens, lake and rolling hills all look wonderfully natural – but the picturesque views are the result of landscape designers’ ingenuity over the 18th and 19th centuries – and four decades since the creation of the YSP.

This spring, the Park features a host of displays, including many of the UK’s best-known sculptors and installation artists – from the 1960s to the immediate present. 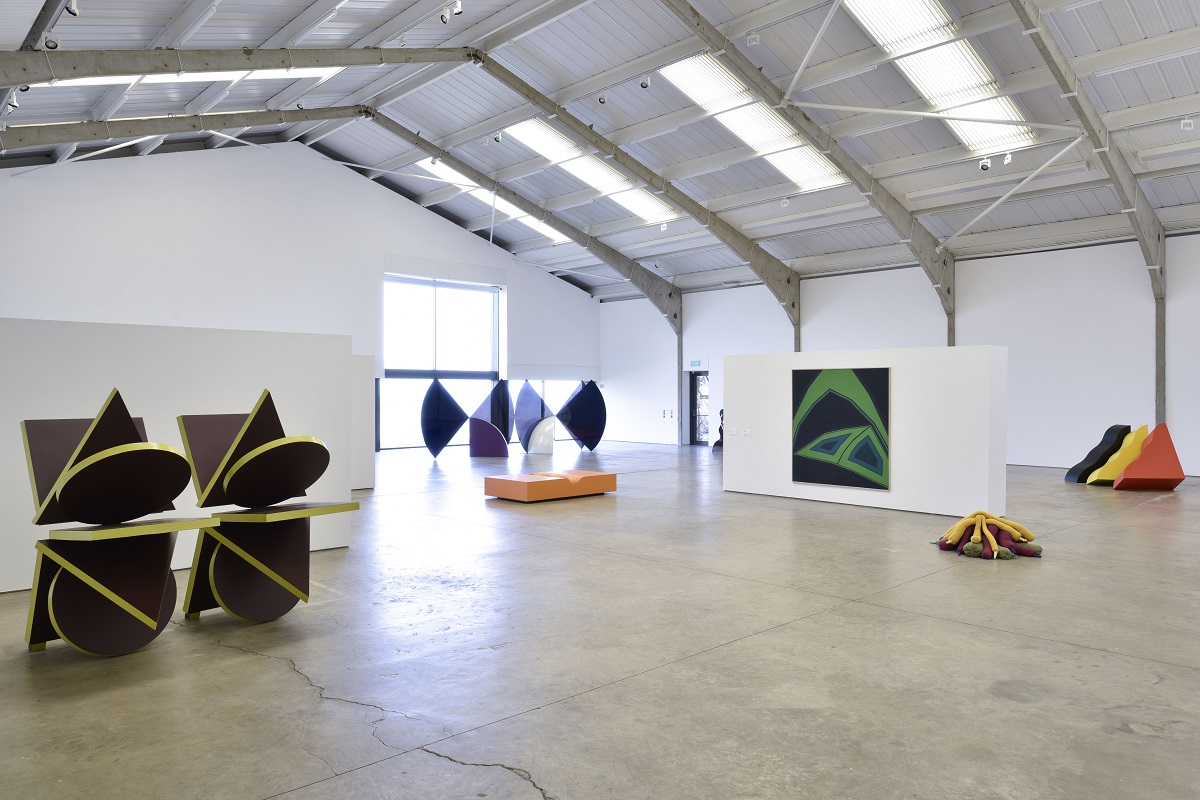 The spirit of the 1960s comes across loud and clear in the beautifully curated Kaleidoscope: Colour and Sequence in 1960s British Art. It brings together work by the New Generation sculptors who were associated with Saint Martin’s School of Art and featured in a run of shows at the Whitechapel Art Gallery.

Tony Caro, Tim Scott and other New Generation sculptors suddenly broke from ponderous bronze to airy painted steel, and sculpture would never be the same again.  Thanks to an increased purchasing grant and the insight of curators and artists, the Arts Council acquired fine examples fresh from the studio. They form a significant part of the Arts Council Collection and are central in this exhibition.

Alongside structures in painted steel, perspex, plastic, canvas and sand are canvases and reliefs by Constructivists Anthony Hill and Mary Martin and Op-artists like Bridget Riley and Geoffrey Steele. Sculpture and paintings speak to each other across spaces in the YSP’s Longside Gallery. 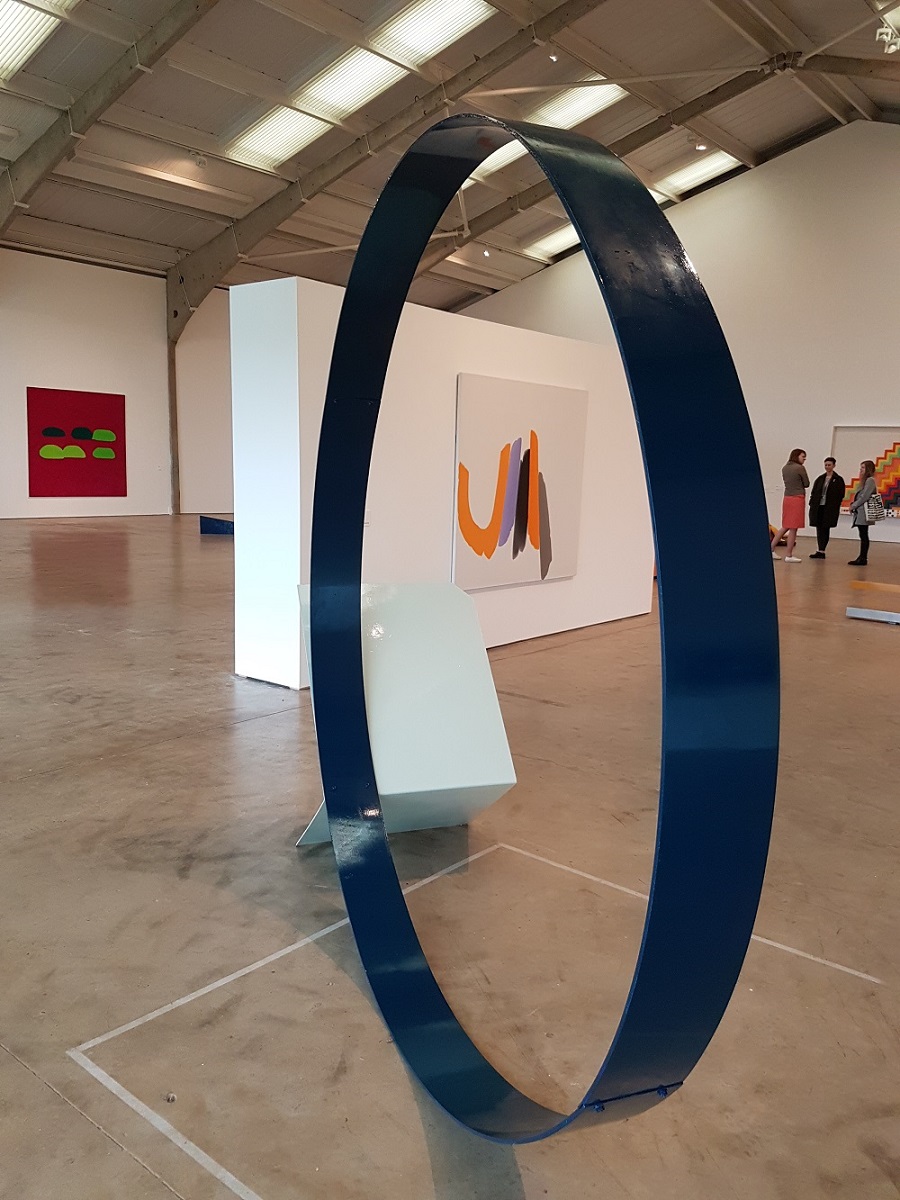 The way in which we interact with the space and objects around us, is of course, the very stuff of sculpture. The New Generation British artists of the 1960s  took up the challenge of the early 20th century forerunners such as Tatlin, Gabo, Pevsner, Malevich, Picasso, Gonzales, who broke up solidity and used contemporary materials. They were also inspired by Constantin Brancusi’s soaring figures and Henri Matisse’s brightly coloured paper cut-outs.

Tim Scott’s 6-metre long Quinquereme sets the tone – balancing between symbol, metaphor and contemporary object. Set in the gallery against the open Yorkshire landscape, it is full of visual and historical allusions. Its navy blue acrylic sheet sails cut crescent shapes in the air, referencing the  warships of the ancient Greeks with their five banks of oars. It also has a semi-industrial feel, suggesting propellers and windmills.  The whole piece seems to float away. 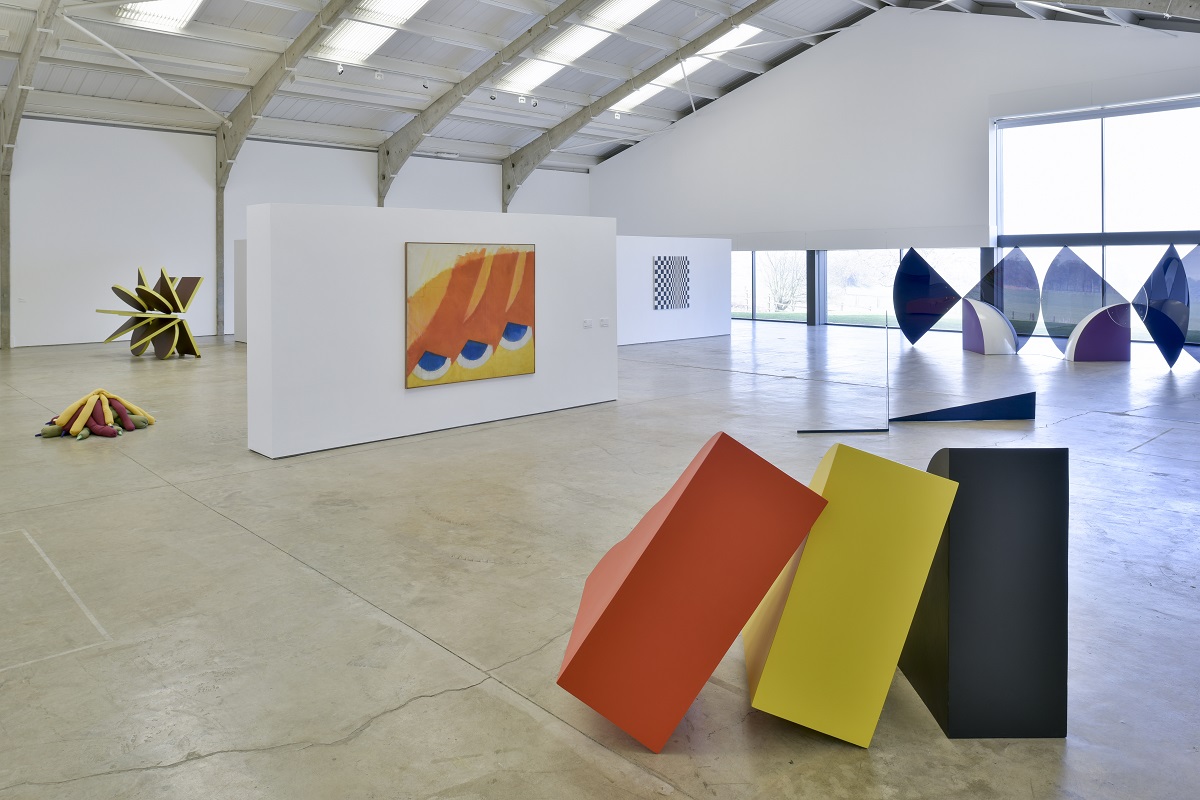 Curator Sam Cornish notes that “physical bulk and weight are bound up with illusions of weightlessness and detachment from the ground. Together, these contradictions created an enigmatic art, despite the immediacy of its visual appeal”.

“There is a sense of optimism around Modernity,” he says. “It was a time when artists could say something about modernity and rejoice in its techno-futurist aspects”.

His sensitive selection and juxtapositions reveal a moment that appears “both startlingly present and strangely distant”.

From chapel to art gallery

[Re]construct, a second Arts Council Collection display, is set in the Park’s newly restored 18th century Chapel. Its entrance is dominated by Ai Weiwei’s Iron Tree, cast from ancient wood collected by the artist.  A tiny pool of rainwater has collected in the trunk making it feel like it has become part of the vegetation and is being re-colonised by nature.

The Chapel nave, lit by a large window over the former altar, forms the perfect space for Cornelia Parker’s Neither From Nor Towards. Worn-down bricks collected from the south coast of England are suspended on almost invisible threads in a ghostly but exquisite reconstruction of a vanished house. 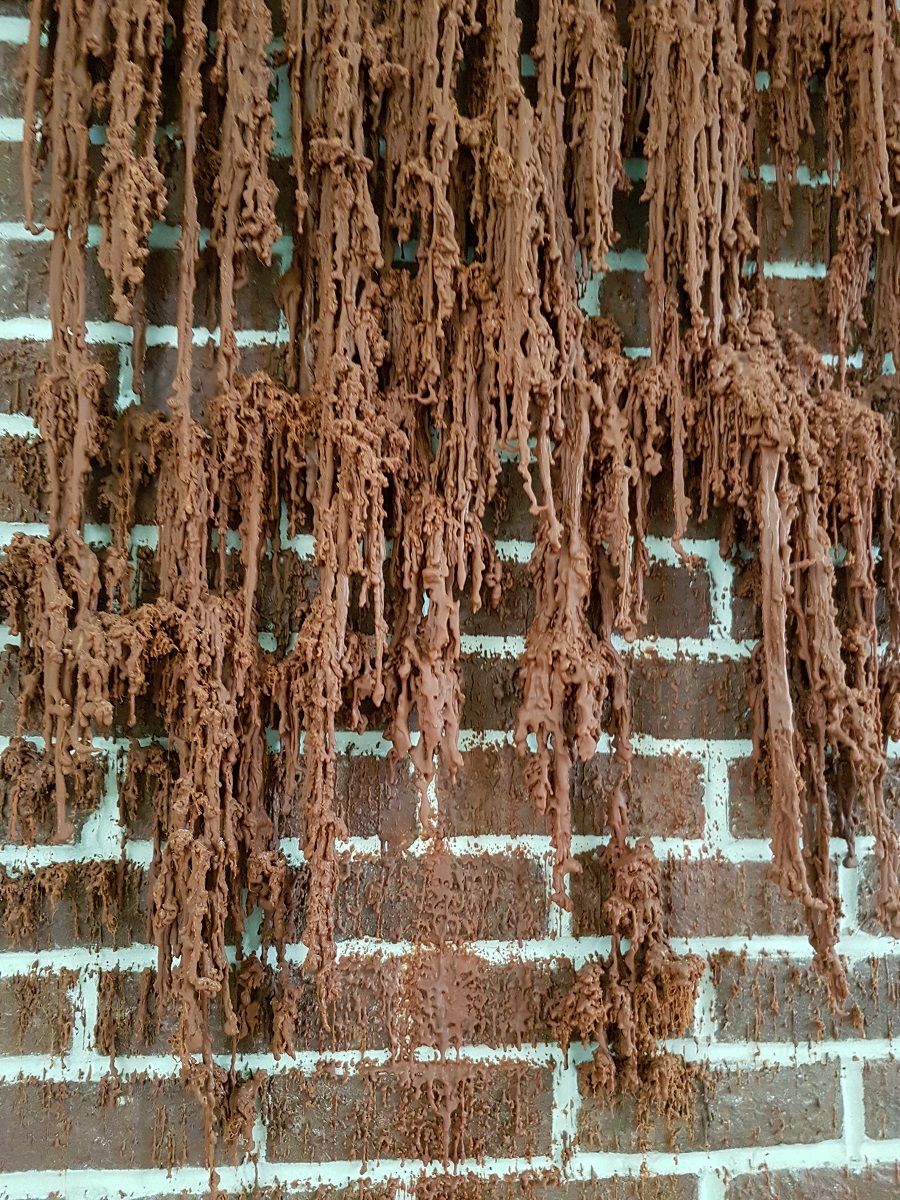 Other works are more frenzied and psychologically disturbing. Alex Chinneck’s A hole in a bag of nerves uses oxblood-coloured wax oozing off a wall that seems to be made of bricks, but is really of paraffin wax. The old chapel surroundings provide religious undertones to his frozen in time drips – the ordinary made extraordinary indeed.

Video works by Lucy Gunning and Emily Speed explore the way in which space and the (female) body interact. There are claustrophobic, subjective aspects to their work which recur in Nina Saunders’ Ladies Waiting Room.

[Re]construct brings together work made between 1990 and today. A multiplicity of themes in a variety of media encourage a re-thinking of usually unstated but often disturbing relationships to our habitats and architectural spaces of many kinds. The strong presence of women artists is in contrast to the male-dominated last century.

Thinking back to Kaleidoscope and British sculpture of the mid-1960s, it seems that varied media and messages from the Postmodern 1990s until today stand on the shoulders of the Sixties pioneers.

Kaleidoscope: Colour and Sequence in 1960s British Art, an Arts Council Collection touring exhibition, is at the Yorkshire Sculpture Park until 18 June.  It travels to Nottingham, Warwick and Liverpool until June 2018

[Re]construct, an Arts Council Collection National Partners exhibition, curated by Sarah Coulson, is at the YSP until 25 June.