The vertiginous, downward spiral of the global capitalist economy is at last forcing itself into the consciousness of even its most loyal supporters and advocates.

Not the least affected among them is Professor Lawrence Summers.

You won’t find a more steadfast and respected pillar of the economic and financial establishment anywhere on the planet.

In his time Summers has been a swashbuckling privatiser – especially of the economies of the former Soviet Union and Eastern Europe, and a leading cheerleader for deregulation.

That means he was, at the very least, influential in the key decisions leading to the 2007-8 crash. Morally responsible, some might say.

Now he senses trouble. “The global economy is entering unexplored and dangerous territory,” he says, commenting on the annual meeting of the International Monetary Fund which has just taken place in Washington.

Why? Because, according to Summers, a spectre is haunting the global economy and no one seems to be doing anything about it.

That “spectre” is one that goes right to the heart of the system. One the hand, says Summers, it is “stagnation and inadequate economic growth” and on the other hand, “ascendant populism and global disintegration on the other, has caused widespread apprehension”.

If you thought “global disintegration” was not a stark enough warning, it gets worse. “Traditional ideas and leaders are losing their grip,” Summers warns.

As you can tell, he, like so many of the 1%-ers, is getting increasingly concerned about the worldwide rejection of austerity by the rest of us and the gathering, renewed storms of revolt, saying:

“It can hardly come as a great surprise that when economic growth falls short year after year, and when its beneficiaries are a small subset of the population, electorates turn surly.’ That’s putting it mildly.

He goes on to compare today’s politics with 1968 “when people were in the streets in many countries”. More than that Larry. In 1968, a global revolutionary upsurge shook ruling elites from Paris to Berlin, from Vietnam to Czechoslovakia, from London to Washington.

The UK vote to leave the European Union is part of the worldwide rejection of the elites. It is widely supported in France and elsewhere. You can see it in the support for Jeremy Corbyn, for Bernie Sanders and yes, even for Donald Trump. That much Summers has got right.

All attempts to offset, reduce or reverse an unstoppable decline have failed. The system is now manifestly unsustainable – everywhere. Unsustainable not just because of the long-term decline in the rate of profit which has undermined investment and strangled growth, and in soaring global debt, but crucially unsustainable in its impact on the planetary ecosystem.

So Summers has changed tack. He says leaders have to accept the new realities. No longer the neo-liberal, he’s now in favour of government intervention and spending: “This means rejecting austerity economics in favour of investment economics,’ adding that “central bankers need to embrace spurring demand as a primary objective and to cooperate with governments” and that “enhancing infrastructure investment” in the public and private sectors should be an immediate priority for governments.

Does all that read like something from the Corbyn camp? Surely not!

The problem for anyone hoping and pushing for a Keynesian turnaround is that it can’t and won’t work.

Michael Roberts, who works in the City of London as an economist, explains why:

“The world capitalist economy is still drunk from too much debt and starved of profitability. And now total corporate profits are falling globally while debt continues to rise – with the prospect of a new global slump on a fast-approaching horizon.”

According to Summers, there was no sense of an imminent crisis at the IMF meeting in Washington.

But Roberts highlights the debacle at Deutsche Bank, Germany’s largest bank by far in Europe’s most successful economy. It is facing huge fines imposed by US authorities for mis-selling mortgage bonds to clients globally during the great housing boom and bust leading to the global financial crash. 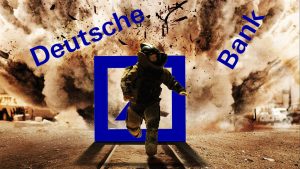 Some warn that the collapse of Deutsche Bank would have far more serious implications than the demise of Lehman Brothers, which triggered the 2007-8 meltdown.

According to the IMF, “Deutsche Bank appears to be the most important net contributor to systemic risks in the global banking system”.

Millions upon millions continue to suffer from the effects of the 2008 crash. A new, far worse catastrophe is building by the day. There is no acceptable solution to the deepening crisis within the framework of the capitalist economy.

Workers everywhere should study the experiences of democracy in the workplace as the basis for a society beyond capital.