Hammond fiddles while the economy burns up

We had to wait for elder statesman Ken Clarke in questions from MPs to introduce, ever so gently, a reference to the threat of recession. It was the first and last time even a hint of reality entered the proceedings of the chancellor’s autumn statement.

Beyond the borders of the UK, however, and beyond the influence of the Tory government, the global economy is riven with crises of unprecedented proportions. Their consequences are being felt everywhere already. Much worse is looming.

Philip Hammond’s democratic credentials are virtually non-existent. Reportedly the second richest member of the Cabinet, having accumulated his wealth in the private healthcare sector, he can perhaps best be described as a political odd-job man acting for the rich elite. 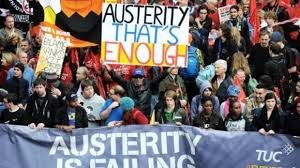 On being appointed as chancellor in July, his initial response to the anti-austerity anger expressed in the anti-elites Brexit vote was to loosen the limits on government debt set by his predecessor George Osborne. These parameters set the tone of his package of numerous, quite detailed, but mostly trivial tax and spending adjustments.

What do they amount to?

Another dose of quantitative easing from the Bank of England to give the appearance of a minor retreat on austerity, whilst offering some less than impressive inducements to corporate investors. These include some infrastructure spending and support for the research and development that the private sector simply won’t do. Its a kind of free money giveaway offer.

As chancellor, Hammond’s power to influence the worsening, increasingly debt-dependent health of the government’s finances, let alone the wider economy, must be rated as negligible. Every signal he can send, every button he can press is conditioned by the swirling necessities of a global economy in decline.

Within the limits of its own remit, the Office for Budget Responsibility’s commentary gives a flavour of what’s afoot:

“The economy will grow more slowly than we expected in March, with GDP growth in 2017 revised down from 2.2 to 1.4 per cent and cumulative growth over the whole forecast revised down by 1.4 percentage points. A weaker outlook for investment and therefore productivity growth is the main cause. Inflation is forecast to peak at 2.6 per cent and unemployment to rise modestly to 5.5 per cent during 2018. Subdued earnings growth and higher inflation mean that real income growth stalls in 2017.”

Whilst the OBR is talking about the UK, the trends are universal. Investment is falling because the rate of profit is falling. Even with ultra-cheap money, there’s just no incentive. So the requirements of capital at this point are overwhelmingly dominated by the need to eliminate low-productivity jobs, to squeeze more from those still working wherever possible, and to jettison every cost that reduces the bottom line figure of profit.

Pensions are top of the list for elimination. But this merits hardly a mention in the chancellor’s statement. Will pensioners – currently among the worst served in the developed countries – benefit from Theresa May’s early promise to those “just about managing”? Not at all. More like just about surviving.

The Pensions Protection Fund has revealed that 4,995 defined benefit schemes are in deficit, representing 84% of the total. And the number is rising. Tom McPhail, head of pensions research at investment company Hargreaves Lansdown, says: “I don’t see how employers and British industry will ever generate sufficient income and profits to make good on all the promises made to final salary scheme members,” he says. “It looks like that gap is unbridgeable.”

In the run up to the statement, with the £600 million BHS pension deficit unresolved amid calls for Philip Green’s property including his brand new £100 million super-yacht to be seized , news from BT, Tata and elsewhere piled on the pressure, underlining that pensions are unsustainable globally.

At the end of October, BT reported that its pension deficit had grown to £9.5bn from £6.2bn just three months earlier. BT’s astonishing deficit is second only in the world after US-based chemical giant Dupont according to a report on 5,000 company pensions worldwide.

Agnes Grunfeld, a vice-president at MSCI, the index provider that compiled the report, called the findings “uncomfortable”, adding: “This is a crisis for corporations, and something investors should be paying very close attention to.” Their fear is that ballooning pension deficits could derail a company’s expansion plans and halt dividend payments.

A crisis for corporations, for sure, but a worse one for those who’ve paid into the schemes throughout their working lives. Their fear is that the pensions they depend on for their income in later life will simply disappear in a puff of smoke from Tata’s furnaces.

Tata, which employs 11,000 in the UK, meanwhile piles the pressure on the government, threatening either to close the British Steel Pension Scheme (BSPS) or pull out of production in Britain. The BSPS has liabilities of more than £15bn and 130,000 members, making it one of the biggest retirement schemes in the country.

And its not only companies attacking pensions. The all-party Work and Pensions committee of MPs – led by Frank Field – this month called for the scrapping of the triple-lock protection of the value of the pitifully small state pension, though Hammond, sensing the likely scale of political fallout, chose to retain it – for the moment, at least.

And then there’s housing. A report from ResPublica last week notes that 1.2 million people are languishing on housing waiting lists in England, while more than six million face tenure insecurity and no prospect of ever buying their own home. Hammond’s ban on letting agencies charging fees to tenants, and 40,000 “affordable” houses for families with incomes of £80,000 to £90,000 won’t satisfy many of those.

But, hey, its not all bad news! Google and Facebook are investing in the UK!

Globally profitable Google – infamous for paying just £150m to the HMRC earlier this year – has committed to post-Brexit UK with a £1 billion investment in London. They’d already been promised a £2 billion investment pot in science and technology R&D, plus May’s pledge of “the lowest corporate tax rate in the G20”, which Hammond has now reduced to 17%, “but also a tax system that is profoundly pro-innovation”. And pro-business.

There’s more than just handouts attracting the tech companies according to Suranga Chandratillake, a general partner of venture capital firm Balderton. “The good news from Brexit is the pound is weak and so traditionally expensive UK employees are looking cheaper.”

Wages are still lower than before 2008 as shadow chancellor John McDonnell underlined in his response to Hammond. Six million are earning less the living wage, and 1 million aren’t receiving the social care they need, he said. Some 3.9 million are in the queue for NHS treatment, whilst spending on healthcare per head has declined for the first time – ever.

In response to the statement, McDonnell pressed Hammond to stand up for British business, to ensure access to the single market “in the national interest” after Brexit. Unfortunately, with the political and economic system in a deepening crisis, facing rejection by people on an international scale, this is rather missing the point. Capitalism is the problem, not the solution and this should be said loud and clear at every opportunity.