How to create our own future 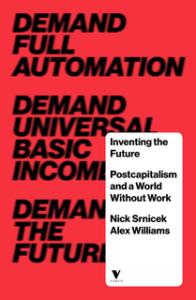 There’s no shortage of critiques of capitalism these days, but realistic and inspiring proposals for the means to replace it with something better are rare. Inventing the Future goes some way to filling the gap.

Nick Srnicek and Alex Williams kick off with an in-depth examination of the lack of results achieved by mass demonstrations against war, multiple protests against globalisation, occupations of the squares against austerity and inequality, and a wide range of localist and horizontalist initiatives.

They then issue a deliberate challenge to the limiting tendencies they collect together under their disparaging, almost sneering, but nevertheless telling category of “folk politics”.

This serves the first aim of the book “to disrupt an increasingly dogmatic set of principles about how to strategise and do politics today.” The second is to suggest an alternative project – rebuilding the power of the left – “organised around global and universal emancipation”. More of that later.

So whether you’re hard at work on the next episode of direct action, deeply involved in attempts to generalise the Occupy-style direct democracy that became popular in the wake of the Arab Spring, or quietly organising a local food or energy coop, or even striving to restore the fortunes of the labour and trade union movement, be prepared to have the limitations of your activity challenged and, importantly, explained.

The lessons are drawn from practical experiences across the world, from localised consumer activism to entire countries driven to the edge:

“The key problem with Argentina as a model for postcapitalism is that it was simply a salve for the problems of capitalism, not an alternative to it. As the economy started to improve, participation in the neighbourhood assemblies and alternative economies drastically declined.”

The limited achievements of the essentially reactive, short-sighted reformist left are sharply contrasted with the strategic, forward looking long-view preparations that brought a variety of intellectual strands together under the banner of neo-liberalism. In just a few pages we follow its history from its early shoots on the margins of academia in the 1920s to the establishment of the post-second world war “neoliberal thought collective” that led – via the Hayek-inspired Mont Pelerin Society – to a global network of increasingly well-funded policy groups and think tanks. This constant, long-term work produced a cohort of intellectual leaders ready to move into place and to influence government following the collapse of Keynesianism in the 1970s.

Srnicek and Williams argue that “the left can learn from the long-term vision, the methods of global expansion, the pragmatic flexibility and the counter-hegemonic strategy that united an ecology of organisations with a diversity of interests”. It’s an intriguing proposition.

“Modernity” it is argued, must be contested, not rejected. “The conceptual ideals – such as freedom, democracy and secularism – are the source of both capitalist modernity and the struggles against it.”

Here, the reader will find a powerful rejection of the postmodernist dogma of the inevitability of capitalism as the endpoint of history.

“Capitalist modernity was never a necessary outcome, but instead a successful project driven by various classes and a systemic imperative towards accumulation and expansion. Various modernities are possible, and new visions of the future are essential for the left. Such images are a necessary supplement to any transformative political project. They give a direction to political struggles and generate a set of criteria to adjudicate which struggles to support, which movements to resist, what to invent, and so on.”

From philosophical underpinnings we’re taken into the foundations of capitalist society – the social relations that demand that the majority, in order to live, sell their ability to work to an employer in exchange for a wage. And it is here that we’ll find

“the mechanisms that produce a secular trend towards a larger and larger surplus population, independently of cyclical boom and bust patterns…..that pose the biggest threat to the reproduction of capitalist social relations.”

An eye-widening survey shows how the majority of the world’s population are forced to live a precarious existence as appendages-in-waiting to the small proportion of the global workforce employed on formal contracts, with unemployment and the threat of it becoming the norm. And with technological change threatening up to 80% of current jobs within two decades, the future under the capitalist mode of production looks bleak indeed.

“The very social basis of capitalism as an economic system – the relationship between the proletariat and employers, with wage work mediating between them – is crumbling.”

This, at the end of the chapter “The future isn’t working” neatly sums up the message of the whole book:

“Under capitalism, jobs have been pivotal to our social lives and sense of who we are, as well as being the sole source of income for most people. What the next two decades portend is a future in which the global economy is increasingly unable to produce enough jobs (let alone good jobs), yet where we remain dependent upon jobs for our living. Political parties and trade unions appear ignorant of this crisis, struggling to maintain its symptoms even as automation promises to toss more and more workers aside. In the face of these tensions, the political project for the twenty-first century left must be to build an economy in which people are no longer dependent on wage labour for survival.”

So, to coin a phrase, what is to be done?

The proposals we’re offered consist of a set of four “non-reformist reforms”, demands that can’t be satisfied within the capitalist framework. It is acknowledged that they won’t break us out of capitalism, but, or so it is claimed, “they do promise to break us out of neoliberalism, and to establish a new equilibrium of political, economic and social forces.”

So, what’s in this 21st century integrated programme of four demands?

Knowing that capitalist social relations not only can’t allow, but actively prevent full automation even whilst pushing towards it, the authors’ strategy is to create the conditions in which people on the left can set up an imaginary future of Utopias, working their magic as “an active historical force” in the present.

As they persuasively argue “If we want to escape from the present, we must first dismiss the settled parameters of the future and wrench open a new horizon of possibilities. Without the belief in a different future, radical political thinking will be excluded from the beginning”.

Against all the benefits of its inspirational, long-term visioning, the book lacks a sense of urgency. Given the breadth of their study, and the clarity of their analysis, how was it possible, in 2015, to publish this: “While the effects of the 2008 crisis continue to reverberate around the world, it is too late to take advantage of that moment; all around us we can see that capital has recovered and consolidated itself in a renewed and sharpened form.”

Even they, it seems, can fall prey to the impossibly propagandist optimism of global agencies for capital like the IMF, whose predictions for global and national growth have to be downgraded time after time, even within weeks of their initial utterance.

But this is not just a work of academic dreaming. There’s a range of projects that can be begun in the present, like that of the Post-Crash Economics Society which has engaged in the attempt to broaden economics teaching beyond the constraints of neo-liberal theory and practice.

To make any of this possible, they acknowledge, it will be necessary to mount a successful challenge for power. And for that we’ll need a broad spectrum counter-hegemonic populist movement, one that is seeking to overturn the “neo-liberal common-sense and create a new one in its place. It must seek to build hegemonic forms of power, in all their diverse forms, both inside and outside the state.”

It is an approach that excludes nothing, however, seeing essential roles for mass mobilisation, as well as parties contesting elections. “The aim,” they say, must be to avoid both “the tendency to fetishise the state, official power, and its institutions, and the opposing tendency to fetishise antipower”.

This is an extraordinary work on many counts. The closer attention you give it, the more you’ll get back. Synthesising the wisdom drawn from close to a thousand references which themselves occupy a quarter of the book’s 240 pages, the authors have woven a fresh, new vision of the past and present, and equipped us with some of the intellectual tools needed to open up any number of emancipated futures for humanity. For that it comes highly recommended.

Inventing the Future, Postcapitalism and a World without Work Nick Srnicek and Alex Williams, Verso, 2015