12th May 2016Written by Frank Hayes
Leave a comment

Report from Ireland by Frank Hayes

An unprecedented number of Independent/Other deputies (23 non-party candidates) were elected in the Irish general election on February 26.  It was a sharp judgement on the pro-austerity Politics of the establishment parties which have dominated the “Free State” Republic of Ireland for almost a century.

Alongside these, six socialist TDs of the Socialist Party and Socialist Workers Party were returned (some being re-elected) under the banner of AAA/PBP (Anti-Austerity Alliance/ People Before Profit).  Richard Boyd-Barrett TD (PBP) and Paul Murphy TD (SP) had frequently championed communities protesting against cut backs and water privatisation.

A handful of other left TDs were re-elected including Claire Daly TD, once called “a bitch” by a learned judge for naming some of his colleagues who had drivers’ penalty points quashed by friendly gardai, and Mick Wallace TD, a former builder, ruined by the 2007/8 crash, and now a campaigner for business integrity and political honesty, rare qualities in Dail Eireann.  These two, in particular, had often provided the energetic heart of effective opposition to austerity and its consequences in the outgoing 31st Dail.

With Sinn Fein declaring an anti-austerity position in the Republic (if somewhat more nuanced in Northern Ireland), and returning 23 Dail deputies, two unmistakeably clear messages were being delivered through the proportional representation voting system.

People wanted an end to austerity politics, and people wanted the pro-austerity Fine Gael (FG) party of Taoiseach Enda Kenny TD and their right-wing Labour Party sidekicks removed from office.  But the numbers game of the 32nd Dail have presented the political class with a Dail which will remain unstable, no matter what is concocted, and regardless of what the Troika instructs from the secret back room.

Following 70 days of political horse trading, secret negotiations, “principles” being abandoned, and a chorus of blatant media political dishonesty, both of these clear instructions from the people are about to be contradicted.

A new pro-austerity government is to be conjured up out of the Dail mess of pottage in a process of parish pump politics, connivance at its very apex. And at the centre of this web of deceit sits Fianna Fail (FF), their leader Micheal Martin now proclaimed by the state media as The Master Manipulator. 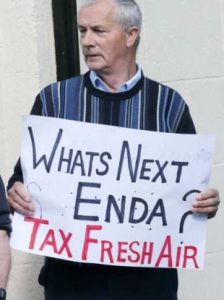 His terror at being forced into a unified rightist administration (FG/FF Coalition) had more to do with his fear of leaving Sinn Fein as the main opposition “republican” voice, than with yielding to Kenny’s offer of “joint” leadership for conservatism.

Kenny has had to turn towards the rural independents of the Independent/Other category, and as some of them confirm deals which will not be delivered, the same old far right FG Blueshirt operators will keep their hands on power in an unstable and vulnerable minority government facilitated by a treacherous FF and some naïve independents.

The fervent wish for political stability will remain unrealised. Mainstream official establishment economists, well versed in carefully disguising truth in misleading statistics, are now leading a hopeful charge towards their sincerely wished for return to pre-2007 boom/bust “stability”.  But it’s not for the 100,000 people without homes, or those eking out an existence on reduced incomes and slashed welfare.

But the true situation of the vulnerable open Irish economy is predicated on external factors, the UK being its biggest trade partner, and of course, the ailing EU its real master (power exercised, as with Greece, via the Troika dictatorship).  And Brexit threatens, fearfully.

Acting Taoiseach Kenny says he can cobble together a feasible administration from this mixture of single issue local independents.  But they face a hopeless task of balancing Troika instructions for increasing Austerity, against a popular mood rejecting this out of hand.

FF’s Martin won back some deserters with a pre-election promise about abolishing water charges and the Irish water corporation.  They are now being diluted, if not drowned!  Now he says “people should pay” the water bills already issued, and “those who haven’t paid charges must be pursued”! Those who coughed up for the double charging/taxation (often through fear and coercion) will not be refunded.  As Pat Rabbitte, discredited former Labour Leader revealed on behalf of all his Dail colleagues: “You have to lie, we all do it at election time.”

The people voted for candidates they thought they could trust.  Some may have forgotten the Rabbitte Rule Of Thumb, in their haste to rid themselves of a vile regime.  A regime which is now to be restored by a parliament of shame, to continue its punishment of the people on behalf of the financial elite, facilitated by political chancers and cheaters.

This calls into question the whole legitimacy of the present Dail System which is unable and unwilling to execute the clearly expressed wishes of the people. And so, it also raises the question of finding a way to replace this failed structure with a process of Real Democracy, capable of delivering the very real and urgent needs of the ordinary people of Ireland.

As the savage austerity programmes resume, disappointment will engender a renewed and mounting opposition, as Martin signals to Kenny that he will facilitate continuing the move towards water privatisation, (but at a slightly slower pace).  And as other intended consequences unfold, the water protestors will be joined by many others in a resumed and much wider movement opposing what was voted against on 26th February.

In the aftermath of that election, Ireland finds itself foisted with a parliament containing naïve and opportunist conformists, incapable of standing up to Kenny and Martin and their international corporate backers. After 70 days of haggling, a new reality is beginning to emerge before voters: that many of those they chose and trusted with a vote, to defend their communities, are quite incapable of standing up to the Troika Axis, or of imagining or creating a democratic alternative to the pro-austerity establishment.

The ancient word poltroon, still a frequent disparagement in Hiberno-English, refers to “An arrant coward; a dastard; a wretch without spirit or courage”. On this shabby performance, the 32nd Dail can justly be named the Poltroon Parliament.

And as the political poltroons succumb to the austerity diktat of the IMF/EU/ECB, the time has now come to consider, imagine, and prepare for a Second Republic.

The first republic, born out of a civil war, now enters a lethal crisis, as the class which founded it founders in the global crisis of a declining globalised capitalism.  And as the people become more conscious of these realities, real change will be unavoidable. Campaigning for a Real Democracy Movement throughout Ireland will hasten the day.