Sargent’s watercolours – before the storm

Dulwich Picture Gallery’s display of John Singer Sargent’s watercolours – the first in the UK in nearly a century – provides a tantalising glimpse of this still controversial artist.

Sargent’s unrivalled virtuosity in reflecting the rich back to themselves as the Van Dyck of his times has blinded critics from the 19th century right up to the present.

In his day he got flak from both sides – from establishment critics like George Moore and modernists like Roger Fry – and he still does, for example from The Independent’s Michael Glover. Even amongst those who recognise his huge talent, accusations of superficiality and heartlessness persist.

For despite his role as a high society portraitist, “…there remained a whiff of danger about Sargent”, as Colm Toibín has written, and there are still so many secrets to explore, so much to reflect on and appreciate.

Having given up portraiture in 1907, aged 51, Sargent travelled continuously, mostly to Italy and Spain, but also around Britain and Greece. He felt more free and happy in the watercolour medium than in oils. He could concentrate on what he really wanted to do and they “kept up his morale”, he said. 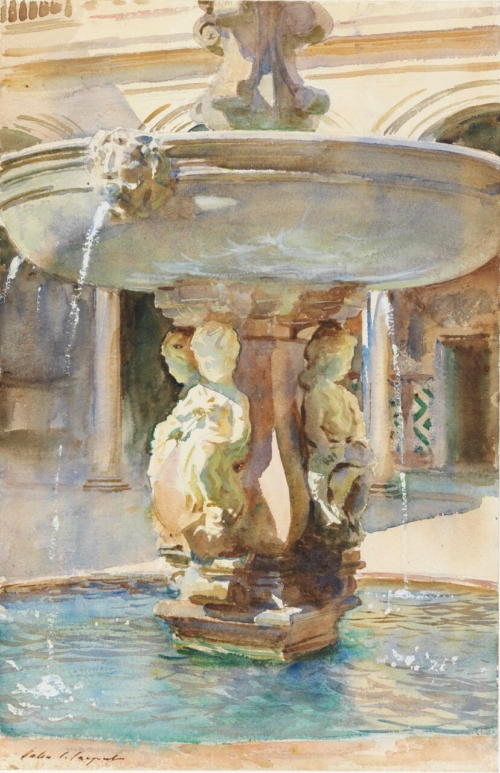 It was certainly no hobby. He transformed the modest watercolour – as did Turner in his time –  into something new, expressive and sometimes even grand. Through his choice of subjects, or through the sheer audacity of a composition, he achieves something transgressive.

In addition to presenting cities, architecture and landscapes in new ways, Sargent had an uncanny ability to capture the moment as a human moment, to infuse mood and a sense of zeitgeist into his work, whatever the medium. Even in his depiction of family and friends, alongside the beauty there is so often a sense of unease, danger and tension.

The watercolours in this exhibition of Venice, Bologna and Rome are not grand tourist vistas, but fragments or close-ups. Fountains, walls, churches, palaces and boats are viewed from unusual angles or from below.  Perhaps he was under the influence of Italian fresco masters who showed scenes “sotto in su” – or “looking up from below”.

Elaine Kilmurray, along with co-curator along with Richard Ormond (Sargent’s great-nephew), has rightly pointed to the “modernist” innovations in these 80 small paintings, made between 1900 and 1918.  Indeed, Sargent worked closely with Monet, with whom he continued to correspond for many years. He owned two works by Manet and four by Monet.

In this Impressionist vein is the breathtaking San Vigilio (1913),  a painting of a small area of coastline on Lake Garda. Just a few marks convey the lapping water, touching the edge of a faintly indicated boat, its oar catching a few rays of light. At first it seems abstract, but the floating marks cohere to create distance, shadows and small waves.

Even in Sargent’s most “establishment” works, there is always a feeling of tension.

The veiled ladies from 1907, slumbering on river banks in sweltering sun –  are they safe Orientalist fantasies? Not in style nor in content.  The swirling pastels are a distinct move towards abstraction. The vulnerable abandonment and the dreaminess are reminiscent of Gustave Courbet’s  provocative Ladies on the Banks of the Seine, perceived by contemporaries as prostitutes. 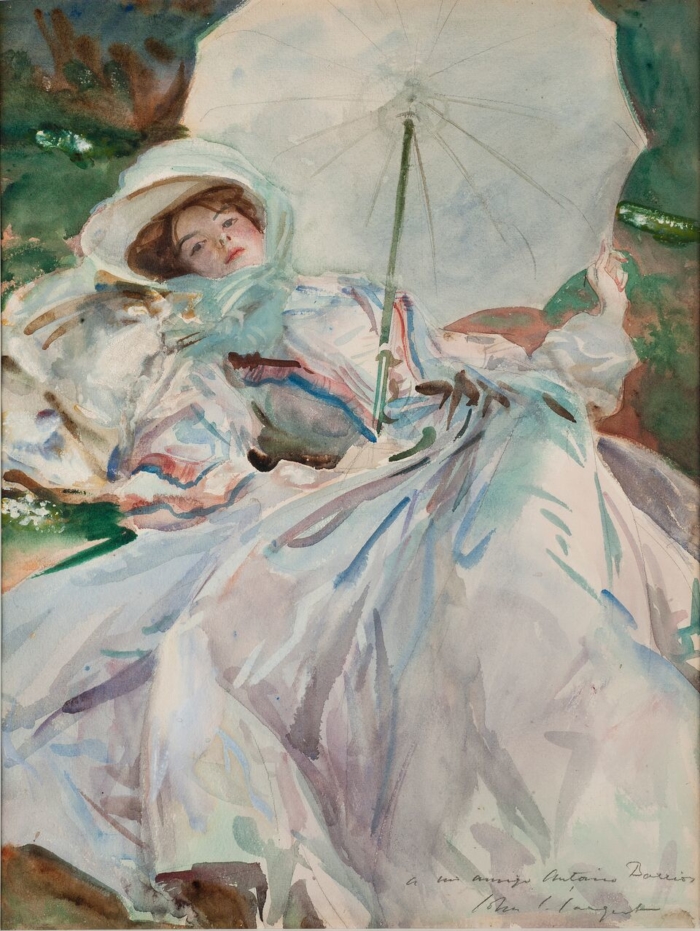 John Singer Sargent. The Lady with the Umbrella

The Lady with the Umbrella (1911), the painter’s niece Rose-Marie Ormond, is a paradoxical mixture of tension and languor. The eye loses itself in the shimmering folds of her skirt before it meets a challenging gaze. It’s a poignant moment because only seven years later Rose-Marie died when a German shell hit a church in Paris where she was listening to a concert.

Looking back now, knowing what was to come, the pre-war Europe that Sargent explored and painted seems like an oasis of beauty and hope. At the end of World War I, Sargent was to be commissioned by the War Memorials Committee to paint the huge and shocking Gassed, in a total departure from earlier themes.

In the run-up to the war, Sargent does not reference political tensions in a direct way but there is often a suggestion of social awareness.  His portrayal of quarrymen (cavatori) at Carrara (1911) conveys extreme heat, gruelling labour and continuous danger. The strange, almost surreal Tarpaulin over a Dugout from 1918 reprises the artist’s love affair with white cloth but in this instance, white points to the horrors of war.

In the final space, a mishmash of bold women and homo-erotic men suggest Sargent’s inner life and loves. The notion that he was dull or lacking in emotional charge is simply ludicrous. Not simply on a personal level, but he kept his independence even late in life – declining the offer of a knighthood from King Edward VII.

Sargent: The Watercolours is at the Dulwich Picture Gallery until 8 October.