“Yes to life, no to mining” 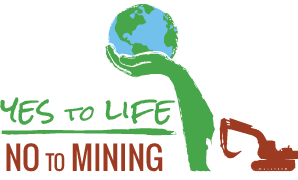 Yes to life, no to mining

In a world first, El Salvador, Central America’s smallest country, has banned metal mining in all its forms to protect its ground water reserves, setting a precedent for other nations to follow.

“This is historic; we are sending a signal to the world that countries can take a different path and say ‘no’ to the mining industry,” said Edgardo Mira, an environmental activist with the National Council Against Metal Mining, an umbrella group of local organisations who’ve campaigned for an end to the industry’s destructive environmental impact for many years.

With the slogan ‘yes to life, no to mining’ reverberating around the country, the members of the single-chamber Legislative Assembly passed the landmark law on March 29, by 69 votes out of 84.

Jubilant activists gathered early that day outside parliament to demand the approval of the ban agreed the day before by the legislature’s environment and climate change committee.

Holding a sign with a yellow background and an image of a skull in black, César Augusto Jaco, 76-year-old member of the Network of Community Environmentalists of El Salvador, said: “Mining is disastrous, there’s no way it’s not going to damage our water sources.”

The risk of further damaging the country’s ground water reserves has been one of the main reasons driving the struggle of activists against the extractive industry, which uses – and poisons – millions of litres of water to obtain gold.

El Salvador’s Ministry of Environment and Natural Resources estimates that 90% of the country’s surface water has been polluted largely due to the mining industry.

The government’s ban on metal mining comes in the wake of its momentous victory against transnational mining company Oceanagold after more than seven years of mostly secret deliberations at the World Bank’s International Centre for Settlement of Investment Disputes (ICSID).

Oceanagold’s case against El Salvador is one of hundreds that corporations have filed against governments under the investor-state dispute settlement (ISDS) system, a mechanism enshrined in thousands of international trade and investment treaties and some domestic laws.

The system became a flashpoint for opposition to the proposed Transatlantic Trade and Investment Partnership between the US and Europe.

Now the European Commission is pushing forward on a multilateral investment court – a kind of special court for corporations which would tie governments even more tightly into a legal regime where private profits trump the public interest and democracy.

Once established, it would take decades to unpick.

El Salvador is one of the world’s most environmentally vulnerable countries, according to international agencies. Its geographical location makes it highly susceptible to the impacts of extreme weather events which are intensifying as a result of the changing climate.

The Economic Commission for Latin America and the Caribbean, the Latin American Water Tribunal, the International Water Association and the Global Water Partnership (GWP) agree that the country is heading toward a situation of water stress.

The approval of the anti-mining law was the result of a lengthy campaign by activists, local communities and the Catholic Church which endorsed the popular demand.

On March 9, San Salvador’s archbishop, Luis Escobar Alas, led a march against metal mining to parliament, where they handed over a bill drawn up by the Central American University, which formed the basis of the law that was finally adopted.

“We are celebrating the triumph of our struggle, and our celebration continues out there in the communities where the people have been fighting,” said Rina Navarrete, the coordinator of the Friends of San Isidro Cabañas Association.