Reclaiming culture from the 1%

Introduction by Dan McMahon to the session:

Since the global financial crisis, there has been continued concentration of cultural power into monopolies and scandals casting a menacing shadow over society. Scandals, from phone hacking, to #me too revealing the extent of sexual violence in the entertainment industry contribute to a general feeling of horror and distrust.

At the same time, austere council budgets have made devastating cuts to all forms of cultural activities. This furthers the gap between the public and cultural production when programmes which offered a pathway to expression and self-education within the community start to disappear. From art galleries to exhibitions to libraries and school librarians, nothing has been safe from the cuts.

The relationship between attention, defined as ‘engagement’, a click, retweet or comment with influence and power within online journalism has meant that current affairs institutions have been quick to exploit the new shock politics. Even the BBC now tweets on the election of a far right, climate denying president to one of the largest, most diverse and biospherically significant countries in the world- ‘Racist, sexist and homophobic or a refreshing break from political correctness?’ 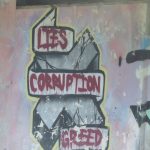 Yet, the story of our culture in the zombie-phase of neoliberalism is not only this. The anti-capitalist cultural critic and academic Mark Fischer emphasised the potential for leftists to reclaim the cultural imaginations of our communities. An age of regression within commodified mass culture is an invitation to imagine in new spaces.

As our TVs are filled with repeats and nostalgia, many turn to art and writing as a space to work through the problems they face.  How do we process our own anxiety and insecurity,  as well as the regression of social attitudes and reactionary rage which defines this historical moment?

Education may be devalued and viewed only as the means to get a job, yet solidarity skill shares and self-education takes place in social centres and communities across these isles. Theorists like David Gauntlett argued that making is connecting, and a more collectivistic, empowered model of culture is emerging. This is happening both on social media and on the streets. We see this in forms of craftisim, gorilla gardening, zine making, yarn bombing, antiracist rap and punk.

New leftist Youtube channels have been responsible for the emergence of the video essay, especially from channels like Contrapoints, as a new educational film form provides an alternative model and gains popularity.

Additionally, this grassroots creative culture is often explicitly anti-oppression. As mainstream cultural forms faciliate the reactionary turn in our politics, marginalised people and those at the grind of economic exploitation imagine their mutual liberation in the counter-culture. bell hooks (1984) describes this spirit as something which non-white women and poor women within America have always had to hold for the sake of their mental health:

‘Women need to know that they can reject the powerful’s defini­tion of their reality – that they can do so even if they are poor, exploited, or trapped in oppressive circumstances. They need to know that the exercise of this basic personal power is an act of resistance and strength. Many poor and exploited women, especially non-white women, would have been unable to develop positive self-concepts if they had not exercised their power to reject the powerful’s definition of their reality.’

So, yes, a participatory spirit does seems to be democratising all forms of culture and creating a revolutionary vision of subjectivity in the UK. However right-wing populists and news editors still advance exclusionary movements and counter-narratives. The British spirit of revolt has been captured by those such as Paul Nuttall and Nigel Farage. They have absurdly compared themselves to the Levellers of the 17th century, fighting for democratic reform and a people’s constitution. Their narratives are resonating in places who have been left behind by neoliberalism, even if they are just emanating from anti-immigrant, conservative parts of the British ruling class. Even while seeing this as cynical and manipulative, leftist can ask why this has become convincing.

In the world shaped by Margaret Thatcher’s ‘there is no alternative’ neoliberalism, we have lost the hope that the future will become progressively better for coming generations. Yet, we also face a historical revisionism where a ‘revolution’ or ‘insurrection’ are tied to the cause of shutting the borders and having the ultimate sovereignty lying in a Westminster parliament (that still has a House of Lords). This ‘revolution’ may split the ruling class but by no means wants to abolish relationships of hierarchy and return the land of Britain to the commons.

There is an opportunity for leftists to know their history, and that the evolution of struggles for freedom from oppression and liberation never stops. This means learning and teaching the strategies of previous generations and centuries of people agitating for their rights and imaging a new sort of world.

Exclusionary, hierarchical types of movement aren’t the true heirs of the spirit of rebellion within the UK. This spirit was captured in ‘Tasting Freedom’ a documentary by Ken Faro about the UK asylum and immigration system in the early 1990’s. In one memorable scene, the community living around the immigration detention centre gathered at the gates in solidarity with detainees and chanted ‘freedom, freedom, freedom’ to each other, leaving immigration officials and guards seeming powerless and perplexed.

The UK has never been inhabited by a ‘white working class’, romanticised in much of the British media. We are all defined by regional and international migrations. Some migrations are chosen and others forced by circumstances that the ruling class are directly profiting from. We can see this legacy in housing issues, from Irish potato pickers who perished in unsafe conditions in bothys provided by tattle gaffers in Scotland in the early 20th century, to asylum seekers fighting against eviction in 2018. The struggle against oppression is a lesson in unity in diversity.

Our movements in all their diversity recognise that we are all targets of a common class of property owners, who extract profit from our means of survival. In seizing the means of cultural production we can put this idea forward. A space for imagination. A place for play. Perhaps a spring of utopia will replace the dreary horror show of contemporary neoliberal capitalism. The abuses of power so evident within late capitalism can lead to power’s diffusion and interrogation as it re-emerges in ourselves and communities. What role will culture play in this volatile and experimental time? Are we ready for this power, as a power of empowerment over domination?

Gauntlett, D. 2011. Making is Connecting, the social meaning of creativity, from DIY to Knitting to Youtube and Web 2.0. Cambridge: Polity Press

About the Author: Dan McMahon