Galileo for the Corbyn-voting generation 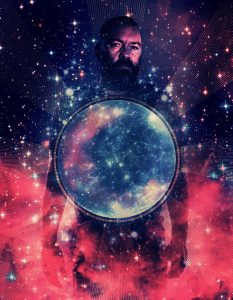 The text of Bertolt Brecht’s play Life of Galileo was started in November 1938 only a couple of months after Neville Chamberlain and Lord Halifax had appeased Hitler and signed the Munich Agreement, and was finished on 1st December 1945 not long after the US had dropped its newly developed atomic bombs on the citizens of Hiroshima and Nagasaki. These bookends significantly characterise the play’s themes; the right to knowledge, the role of science and the scientist in society, and the clash between knowledge and power.

The staging of the Young Vic’s production designed by Lizzie Clachan and directed by Joe Wright is that of a theatre-in-the-round with the circus-like arena further delineated by a raised wooden platform that circumnavigates the space creating a central section or pit in which audience members, as well as some of the actors, sit or lie around awaiting their cue. The remainder and the majority of the audience sit or stand outside the arena. Yvonne Lysandrou writes in her Morning Star review that on the night she attended the audience in this central area were “embarrassed and perplexed”, but on the night we attended this section was taken up by a large group of students who danced, cheered and gleefully participated alongside the official performers. No doubt this circular arrangement was thought to be a fine theatrical metaphor but it more importantly has the consequence of creating a participatory arrangement in the centre where the lines between performer, actor and audience are successfully blurred but where the majority of the audience around the arena are kept at a respectful distance: and not every alienating effect is desirable. Lysandrou laments that the production fails to live up to the play’s potential and contemporary resonances, but when the seating arrangements can’t even cope with basic theatrical democracy that’s perhaps hardly surprising.

The Young Vic proudly asserts that its audience is famously the youngest in London, and perhaps with Wright not for the first time, the production appears to cater, particularly, for that audience. Above the arena a massive concave dish allows for a total of fifty-nine different iMax style projections. Without doubt considerable expertise went into the sequence of the four moons revolving around Jupiter but, just as in the very first scene of the play, such an illustration could have easily been done with the simplest of props. After that, except for a spectacular close-up of the sun in Scene 9 (a terrifying visual metaphor of global warming) I didn’t pay the projections that much attention; and to be fair, from my standing position at the back of the seating I couldn’t actually see it that well.

The performance, if not the play, starts with Brendan Cowell (Galileo) skipping around the arena only stopping in front of the seated audience to perform dance moves to the thumping techno sounds of Tom Rowlands: less Eliot’s still point of a turning world, and more a vital, dancing, skipping, leaping point in a world desperate to stand still or perhaps even turn the clock back to a simpler, more dogmatic time. Cowell’s performance certainly has the effect of shattering the fourth wall even before the play begins and endearing him, and perhaps Galileo, to the audience. However, given that the first three walls aren’t actually present in this production one might equally regard it as an unnecessary overstatement.

It is perhaps worth bearing in mind at this point the circumstances that finally brought the play to the stage. Charles Laughton had last acted on stage in 1934 and since his 1936 portrayal of Rembrandt in Alexander Korda’s eponymously named film had suffered a number of supporting roles in second- and third-rate Hollywood films. He needed to make a comeback, and in 1943 he grew interested enough in Galileo to commission a translation of the text, and or the next two years Laughton and Brecht wrote, shaped, re-wrote and re-shaped the entire work. From the very start then the play had a charismatic individual at it’s centre around which all the other characters revolve. There is then a more important line to be drawn between Galileo’s vitality and his likeability one that this production appears to want to deliberately cross even before Galileo has uttered a single line.

If all this makes this production sound superficial and one to avoid then one scene will, I hope, illustrate the complex multiple layers that are also available. In Scene 12, the clothing of Pope Urban VIII (Cardinal Barberini), played by Brian Pettifer, takes place in full view of the audience. Emerging almost naked it is only when a perfect masculine physique is strapped-on and he is weighed down in the garments of his papal office can he allow the Inquisition to show Galileo the instruments of torture. It is a classic moment of Brechtian distancing, one that allows the theatrical artifice to be revealed and the audience thus able to critically assess what is happening in front of their eyes, and, in this instance, recognise the difference in identity between the individual and the institutional role they take up and are taken up by. This much is in Brecht’s play. And it would be easy here to draw a parallel between the silencing of Galileo’s hypothesis and the silencing of American climate scientists by Donald Trump using what is capitalism’s chief instrument of torture; the fear and insecurity of losing the little that you have. It is a connection all the more ironic since Trump’s meeting with a dejected looking Pope Francis who has described ‘man’s destruction of the environment as a sin and accused mankind of turning the planet into a “polluted wasteland full of debris, desolation and filth”’. But that would be to personalise the failings of America’s democracy; to see Trump as the cause of the problem rather than the outcome of an already corrupt institution. Brecht invites us in Galileo to recognise that no single individual is to blame – that system change is necessary to effect climate change.

When Galileo eventually emerges following his recantation it is his turn to enter semi-naked, his flabby belly exposed and from him all sense of possible heroism stripped. Later, in Scene 14 when Andrea requests a final meeting the stage direction is that ‘after a moment’ Galileo assents. In this moment, Cowell’s Galileo hurriedly tucks his top into his jeans in a desperate attempt to not to relive his shame, not to once again be humiliated in the eyes of his pupil, not to once again be a failure. And after that all the more poignant is his refusal to accept the heroism that Andrea would inflict upon him. As entertaining as the whole show undoubtedly is, this simple, little, dramatic piece of acting outshines all the pizzazz and vacuity of the production.