Arturo Ui is everywhere – thanks to Trump 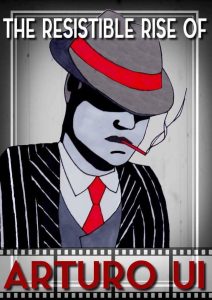 On the night of this performance in Glasgow, by final year students of West College Scotland, Bertolt Brecht’s play The Resistible Rise of Arturo Ui was also being staged in London, at the Donmar Warehouse with Lenny Henry as the eponymous “hero” whilst Dundee Rep’s touring production had reached Menzieshill: Ui, once again, appears to be unstoppable.

Written for enjoyment in 1938, at a time when Brecht was a refugee in Finland, and on a diet of Charlie Chaplin and American gangster movies, the play was initially intended to be performed upon Brecht’s arrival in the US. In fact, it wasn’t performed until 1957 in Stuttgart, and only then in a diptych following a performance of Fear and Misery of the Third Reich. The need for this prologue of Fear and Misery was that the German public were not ready to see Hitler mocked; that the German public would need to learn what they were being invited to mock and that some of the old sentiments were still too close to the surface. Now, of course, the play stands by itself. But our critical distance from that war is not sufficient to explain why three different companies in three cities across this island were all performing Ui on one Friday in June 2017. One word can describe the reason: Trump. And if you don’t like one word, well I’ve got others.

Performed in the claustrophobic atmosphere of the Citz’s Circle Studio, Evelyn Wallace’s production uses the space with a minimum of fuss; a simple design that allows both actors and audience to concentrate on the play. Around the walls were artworks painted in the production’s trademark colours of white, red and black, and in the style of 1930s American adverts – the very stuff of conspicuous consumption of the jazz age. Darren Cullen, the Glasgow School of Art trained subversive artist, has recently described advertising as ‘little more than a gigantic machine for creating human misery. It’s a sustained psychological assault on the population and I think it’s hard to overstate the brutal and permanent damage it does to us as individuals, to society, and to the planet itself’. The paintings aren’t just scene-setting decor; they represent an aspect of the problem.

In keeping with Brecht’s conception of an Elizabethan masque the entire cast were made up in clown-ish white face, and like the adverts, were clothed in black, white and red outfits. The risk of the clownface is that all the characters always all appear as something comical but it was a risk worth taking. And of course, none are innocent. Notable were Ariane Craig as a sinisterly maniacal Giri who played on a coulrophobia that people may not even have known they have; and Grant Hood who did a particularly fine job of ensuring that the audience never sympathised with the sinister and murderous Roma. Kieran Gray successfully ensured that each of his characters – The Announcer, Flake, The Actor, Butler and Priest – were distinctive.

The second half gained momentum partly, I think, because the audience (of mostly friends and family) relaxed and started to enjoy themselves when they realised that they were actually watching a comedy. If there was one major flaw in the production’s characterisations it was that of the Judge and the Priest. In both cases the gangsters/Nazis gain credibility and authority from seeing the trappings of bourgeois rituals played out authentically. This allows what is comic in the scenes to be horrific and comprehensible;  playing the judge and the priest as if they were gang members ruins that effect and the scenes’ meaning. None of that is a reflection upon Gray or Niamh McGarvey’s performances.

Throughout Steven Jess excelled in the title role. Ui, like Trump, may well be a buffoon but he is not an idiot, and isn’t to be played or understood as a ‘passive plaything of stronger men. One of the dangerous things about Hitler was his immensely stubborn logic, his lack of understanding, and half-baked ideas’. Jess does a captivating job in balancing Ui’s Chaplin-esque buffoonery, and his toothbrush-moustache Godfather propensity for violence. Trump has rightly been mocked in a number of ways and this production chose a more subtle approach than the somewhat predictable banner reading ‘Make This Country Great Again’ in Simon Evans’ production at the Donmar. Jess’ Trumpism was straight from the handshake wars; a neurotic handshake that, quite literally, left the other characters shaken.

As Ui delivers his speech at the end of the play a projection of Hitler delivering something similar is switched on. I was fortunate to be sitting where  both actor and projection were in my eyeline. The effect was possibly lost on those on the opposite side of the studio. The play officially ends with a prologue but this was dispensed with. Instead the assembled cast raise their right arm in a fascist salute and chant  his name, “Ui! Ui! Ui!”. So engrossed in the performance was I that I hadn’t realised that behind me and to my side the walls had become covered in swastika flags. It was a salutary lesson; gape at the spectacle and before you know it you’re surrounded by Nazis. Lessons need to be re-learned.

The Resistible Rise of Arturo Ui by Bertolt Brecht at the Citizens Theatre, Glasgow is now ended