Review: How Varoufakis’ dream turned into a nightmare 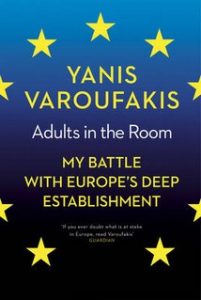 Yanis Varoufakis lost his 2015 battle with what he calls “Europe’s deep establishment”. Now he’s working to build DiEM 25, a pan-European, cross-border movement of democrats. Their aim is to repair the European Union.

In January, 2015 he was elected, with 140,000 votes, as finance minister in the Syriza-dominated government. His mission – to overturn the austerity programme of the troika (the European Commission, the International Monetary Fund and the European Central Bank). After 161 days it was all over.

Having held only university posts, the new government’s finance minister entered the fray armed with A Modest Proposal, a plan to deal with Greece’s debt without the grinding austerity, whilst the country remained in the EU. He’d been working on it for years with Stuart Holland, a former British Labour Party MP and the eminent American economist, Jamie Galbraith.

If all that was needed was a democratic mandate, a powerful intellect, a steely determination, and the cold logic certainty of a theoretically-derived set of proposals based on tricky accountancy, the outcome would have been assured. Especially as it was supported by a stellar range of economists including Larry Summers, Thomas Piketty and Joseph Stiglitz.

Through meeting after meeting, and with a backup plan agreed by prime minister Alexis Tsipras and close colleagues in his pocket, he tenaciously argued his case. To no avail.

In one-to-one, private encounters with an array of key individuals including Christine Lagarde, managing director of the IMF, he’d find support, only to be pushed back in the bear pit arenas of the EU bureaucracy.

By the end of June 2015 having been deprived of funds, Varoufakis was no longer able to make the payments on Greece’s debts, and came close to the point of declaring default. As queues formed at the ATMs outside the closed banks, on June 25, prime minister Tsipras called a referendum.

On July 5, the Greek people were asked to accept or reject the Troika’s demand for more austerity in exchange for additional funds to bail out the banks.

Over 61% of the 62.5% turnout delivered a resounding NO to the Troika’s demands. Tsipras and many of his team were horrified by the implications of the vote. That same night, having abandoned the back-up plan, Tsipras rejected the result, capitulated to the Troika, and Varoufakis was gone. The government had overthrown the people.

Why did Varoufakis’ arguments fail to convince?

The evidence shows the European authorities feared that any concessions to Syriza’s Coalition of the Radical Left would encourage similar movements, in Spain – Podemos – and in Portugal, Italy and France leading to a destabilisation of the Eurozone, or the global financial system itself.

But more powerful forces were surely at work in the shadows whispering in the ears of the EU functionaries and elsewhere. Though they barely make an appearance in the book, two incidents reveal their influence.

The first came after a telephone conversation with US economist Jeffrey Sachs, in which Varoufakis said the time had come to default on payments to the IMF. Five minutes later Sachs rang back after a shocked call from the US National Security Agency, whose informants had been tapping the line.

The other was an intervention from global investor George Soros, currently 29th on the world’s rich list. On June 1 Soros had told Tsipras to fire Varoufakis. “Athens must capitulate to Germany now so that Europe can dedicate itself to resolving Ukraine,” he said. In Soros’ view Europe was too weak to deal with two crises simultaneously.

These are just two overt signs that the world’s most influential institutions and individuals are hard at work. They twist every arm they can to shore up the capitalist system, shaken to its foundations by a falling rate of profit, declining investment, a worldwide slump in productivity, and that cloud of unsustainable debt. The survival of the system depends on their ability to impose a deepening austerity throughout the globe.

Both Varoufakis and DiEM25, his pan-european project for democracy, are virtually blind to and silent on the unrelenting pressure from the network of transnational and global corporations. What about the campaign against TTIP and the others on the long list of free trade deals promoted by well-funded lobby groups? Not a mention.

DiEM25’s manifesto says “democracy is essential for limiting capitalism’s worst, self-destructive drives and opening up a window onto new vistas of social harmony and sustainable development”.

Dream on. In the real world, capitalism can no longer tolerate representative democracy in any but the most hollowed-out, meaningless of forms. That Varoufakis has not learned this most basic truth after being on the receiving end of the most brutal of treatments is somewhat shocking.

Adults in the Room, My Battle with Europe’s Deep Establishment, Yanis Varoufakis (London: The Bodley Head, 2017)