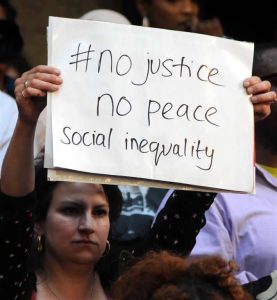 The aftermath of the fire at Grenfell Tower has shown that the state is no longer fit for purpose. It cannot help its citizens. It can only help the elite – and itself.

Where is Kensington & Chelsea council? Where are all the people who work for the housing management company KCTMO, especially the directors who have enjoyed big salaries for their work managing housing in the Borough.

Where is the logistic support to organise help for the survivors? It has not been created.

Why is it people don’t know where they are going to sleep tonight? Because the élite are too busy thinking about how to survive with their power in tact to worry about that.

The survivors are short of food and money. Some say they have been given just £10.

When protesting residents went into the town hall, they did not find armies of staff and councillors working overtime to help – the found a void.

It is residents themselves and volunteers from all over London, all over the country in fact, that are organising donations, food and support. People arrive, find that something needs to be done, and do it.

There is a police cordon round Grenfell – that’s it for presence of state support.

May announces an extra £1.5m for mental health support. But grief counsellors like Graeme Orr from Glasgow point out that this is premature. What people need now is practical help – the grief comes later. The announcement was strictly PR – nothing to do with what people really need.

The Guardian newspaper reports that many local authorities have not even begun to plan fire inspections.

Some explained their plans; others could not even say if they were there had been any discussions about what to do.

In Bristol a resident has applied for a court order to stop a £66m refurbishment programme which includes re-facing 45 blocks of flats. Why did they have to do that? Why didn’t the Council confirm they would revisit the plans to ensure they are safe.

It is clear that the years of austerity and cuts have cut local authorities and welfare services to the bone to the extent that they cannot respond. There is nothing to respond with.

But resources are being poured into continuing and extending benefit sanctions against the poorest and most vulnerable in society – they are “out of control” says a study this week.

The media focus is on the political crisis. The human crisis is slipping on to the inside pages.

People are coming together to help but it’s not good enough for the state to simply opt out. We need a different kind of state – a state of the people.

Get people together in your community to start to consider what it would be like and how we can bring it about.

And in the meantime, we need new elections because at this point it’s the only way we can start to change the situation.

But we need to be very clear that will not be enough. Electing Corbyn as PM is the start not the end. We can use the presence of a leadership that is hostile to neo-liberalism and contains some socialists at least, to give us a breathing space to create the transition.

A Facebook friend of mine made a very perceptive comment this week. Rachel Waugh posted: “It’s only just dawned on me that we are in the 21st Century equivalent of the 16th Century Reformation. During the Reformation people moved from consuming a version of scripture passed down to them through bishops, and instead tried to interpret texts directly. Currently, we are moving away from an understanding of the world and politics as passed down to us by state media and billionaire press barons, and doing our best to work out the truth for ourselves.”