There’s nothing green about bio-energy 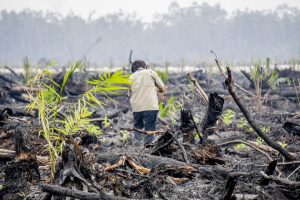 The story of bio-fuels is a moral tale of how marketised, profit-driven responses to climate change will both fail to solve the problem and cause unconsidered damaging outcomes.

As millions of hectares of land are turned over to growing crops for burning, or oil extraction – millions of people are driven off land, often where their communities have lived time out of mind. The land is removed from food production and becomes degraded; bio-fuels go hand in hand with hunger, as this in-depth study explains.

In The Biofuels Deception, Going Hungry on the Green Carbon Diet, Okbazghi Yohannes traces the industry’s beginnings back to the Bush administration and the idea that the world was reaching “peak oil”. Bush set up a secret committee under Vice President (and Halliburton hack) Dick Cheney to identify new fuel sources for the USA to exploit.

The membership of the committee is still secret – but everyone knows it was made up of oil tycoons and academics from corporate-funded think tanks. “By their deeds shall ye know them”, as the Bible puts it. Their solutions were that the US should accelerate domestic oil production, strengthen its presence in oil producing states, such as Nigeria and Angola and help oil transnationals to overcome obstacles to investment in foreign energy sectors. That would be obstacles like the nationalised state ownership of oil reserves in Libya, Iraq and Venezuela.

The results are clear enough – illegal wars, the not-very-secret war on Venezuela, and increased political intervention in Africa, increasingly in competition with China. Further outcomes were lifting the ban on drilling in the Gulf of Mexico and off the coast of Alaska; and the massive injection of loan capital into what was then a very obscure minority activity called fracking.

Step in the agribusiness giants Du Pont, Monsanto and Cargill with another big idea– bio-diesel made from ethanol extracted from gene-modified plants and bio-mass to burn in power stations. The industry was kick-started with massive subsidies and has dined out on them ever since. Big landowners started growing corn to make bio-diesel. In Mexico in 2007 the price of staple corn soared beyond people’s reach and there was a popular uprising against crops for energy.

Obama continued the subsidies, claiming the new industry as a green response to climate change. Now Trump faces a weird dilemma for an oil corporation shill: as the refiners pressure him to end an Obama-era requirement that all fuel at the pump should include a percentage of bioethanol, the agri-business giants and farming states demand the rule should stay to keep up the price of their bio-crops.

Du Pont, Monsanto and Cargill have made billions from bio-fuels. In his forensic examination of the industry Yohannes shows how the drive for biofuel production has led to “the ferocious expansion of giant monoculture plantations of soybeans, oil palm, sugarcane, jatropha, corn, cassava, sweet sorghum, sweet potato and related bioenergy crops and plants, displacing tens of millions of subsistence farmers and indigenous peoples in the tropics and sub tropics”.

Biotechnology corporations promised that biofuel would mostly be grown on poor soils, so there would be no food versus fuel problem; they were lying. As well as looking at the use of land for bio-energy, Yohannes also analyses the overall impact of the “green revolution”, the regime of artificial fertiliser and pesticides that was going to “feed the world” from the 1960s onwards. He shows that the expansion in food production has come not from improved crops or from better fertilisers and pesticides but from a massive expansion of the quantity of land under cultivation, from the destruction of wilderness, savannah, jungle, forest and clearing traditional farmers off their land, replacing bio-diverse subsistence farming with monoculture cash crops.

“The arable land areas under cultivation in developing countries increased by 230 million hectares during the period of the green revolution, while agricultural land in advanced countries decreased by 54 million hectares due to urban sprawl and the development of associated infrastructure. In Latin America, two-thirds of food production between 1950 and 1980 came from the rapid colonization of new lands as the total arable land area has increased by 109 per cent; similarly the arable land area in Asia increased by 30 per cent. The costs of commodifying and commercially enclosing land resources on this scale were born by small food producers.”

He cites the example of Brazil where successive governments have supported capital-intensive monoculture farming to earn foreign currency. It had resulted in the uprooting of 28.4 million people between 1960 and 1980, and is about to speed up again as a result of the election of strongman President Jair Bolsonaro.

The reality, therefore, is that the ‘green revolution’ did not feed the world, but it fed the rich and made the lives of farmers in developing countries worse. To add bio-energy crops to this equation is truly adding insult to injury. Plus the bio-energy industry has acted as a secret infiltrator for genetic modification, which has been permitted because, well, we’re not going to eat it!

As Yohannes says: “This new reality has created a dynamic context for grain and bio-tech oligopolies, not only to accelerate the conversion of more and more crops to biofuel production, but also to expand their effort to commodify other biotic resources for all kinds of bio-based products and fuels. Indeed every plant species is now subject to genetic alteration, even trees…”

The greatest curse on forest eco-systems is the European demand for wood pellets to burn in power stations; the subsidises it to try to reduce carbon emissions from coal.

“Southern US forests have become the wholly owned reserves of the European Union, supplying most particularly wood pellets for electricity and heat generation: exports of US wood pellets increased from 1.6 million short [not metric] tons in 2012 to 5.7 million short tons in 2015, with 98 per cent destined for the EU of which 99 per cent originated in the south.”

The stupid EU classes wood pellets as Carbon Neutral, because trees regrow. But as Yohannes points it, it would take 55 years of regrowth to capture enough carbon from the atmosphere to make wood pellet emissions lower than those of coal. Add in the 4% increase in emissions from transportation from the US to Europe, and the destruction of forests, and you are looking at a model that’s only climate-friendly in Eurocrat fantasies. 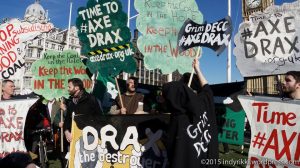 The UK government subsidies bio-mass electricity by around £891 million in 2016,  and Bio-Fuel Watch says subsidies will increase to over £1bn a year as the Contracts for Difference scheme kicks in. They are campaigning to stop the subsidies and also to stop Drax Plc., the world’s biggest biomass burner and the UK’s largest single emitter of CO2, from replacing its two remaining coal-fired units with much larger ones burning fossil (natural) gas and biomass, mostly wood pellets from the US.

Last year’s record floods in the southern US seem a high price to pay for the profits of the wood barons. The damage to infrastructure from extreme weather is costing state governments billions – the same state governments that nevertheless go on supporting the bio-mass industry with subsidies and sweeteners. The success of the transnationals in shaping state and international rules to support their profits, at the expense of people and planet, is the great issue of our age and the one we have to tackle. Yohannes’ excellent explanation of how this happened – and is still happening – in the case of bio-energy, could be transferred to almost any economic activity on the planet.

One of the best things about this book is the final chapter, where Yohannes reports on a slew of alternatives, initiatives and organic innovations that could help humanity to overcome the planetary emergency and transform energy and agriculture. It is a deeply optimistic chapter, but still it underlines our contradictory reality – that we could do it, but capitalism won’t do it.

About the Author: Penny Cole

I live in Lochwinnoch, just outside Glasgow and I am active in Real Democracy Movement, SANE (Solidarity Against Neo-Liberal Extremism) and the movement against unconventional oil and gas extraction.

Hugely timely, for me, finding across this article. From the beginning of the media blanket coverage, I've been trying to work out what the agenda is. I still don't know, but the MSM coverage from beginning means there are establishment / elite plans for us all - https://twitter.com/caitoz/status/1247636556157816833

Real Democracy Movement @democracyOK (of which I am a member) are collectively writing about what we / you want for a better Britain / World after Covid19.
Any thoughts you would like to share below on the thread would be great, thanks.

@DylanStrain @celtjules66 @democracyOK A world where greed is no longer rewarded and key workers are valued and rewarded appropriately.
Who can we do without? Bin collectors or billionaires?

"Capitalism now faces the deepest crisis in its several centuries of existence. A global slump has begun that is already devastating the lives of hundreds of millions of working people on all continents."
https://www.opendemocracy.net/en/oureconomy/why-coronavirus-could-spark-capitalist-supernova/