Tories ignore global heatwave and give backing for fracking 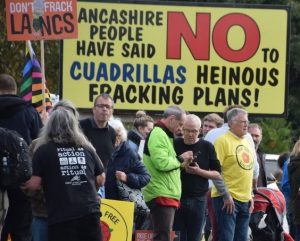 In the midst of the global heatwave, energy minister Claire Perry’s approval of the first UK fracking licence under its new, more permissive regulatory regime reveals more of the real, corporate power behind the government.

Approval for shale gas extraction company Cuadrilla to begin extraction in Lancashire has injected new energy into the opposition movement way beyond the long-term protest at the Preston New Road site.

Having taken powers to over-rule local democratic planning processes in favour of the companies which frack for gas, announced reduced support for renewable energy, and taken out an injunction against the protestors, the permit was announced on the last day of the parliamentary term, to avoid as much criticism as possible.

The timing of this decision could not be more ironic or tragic. Our Government has opened up a new fossil fuel frontier in the midst of a global heatwave, recklessly throwing fuel on the flames of our climate crisis. Wildfires are ravaging the Arctic Circle, while the heat claims more and more deaths around the world.

What’s our Government’s response? Reach for the drills, and get the fossil fuels flowing. This decision comes hot on the heels of a raft of legislation which stacks the deck in favour of the frackers at the expense of ordinary people.

Cuadrilla’s Bamber Bridge headquarters is just three miles from Preston. The company also has operations in Poland, the Netherlands and Hungary.

Preston is also the site of a radical social and economic initiative. Described by the Economist as ‘Jeremy Corbyn’s model town’, and ‘an unlikely laboratory for Corbynomics’, the so-called ‘Preston model’ features in Labour’s Alternative Models of Ownership discussion document.

Preston city’s Labour council has been combining ‘community wealth building’ with its longer-term encouragement for the co-operative sector, including a credit union, community energy company, and social housing. This is the council’s way of tackling inequality by directing public sector spending from the council, local colleges and the police to local companies. Since the start of the project, the council has increased local spending by £4m, from 14% of its budget in 2012 to 28% in 2016.

The hybrid localism agenda involves attempts to stop wealth leaking out into the wider economy by keeping profits local. This in turn encourages local jobs. The council is also trying to make the area more attractive to inward investors, trying to reverse the collapse following the 2008 crash, that turned Preston into something akin to a wasteland.

You might wonder how the government’s support for Cuadrilla’s exploitation of local resources fits with the city council’s plans. As it’s a local company, does the council favour Cuadrilla’s activities? Surely not. Critics point out that encouraging local spending only detracts from other localities – making the project look like a micro-Brexit, taking back local control. But Brexit itself – it is argued – would free Preston and every other council from EU rules on public sector procurement.

What encouragement would a Corbyn-led Labour government be able to provide? Can the alternative reality of localism really survive and prosper within the hostile world of global capital?

Developing policies and solutions that take us beyond destructive neoliberal capitalism become ever more urgent for the Labour leadership and campaigners to address. This radical approach will surely involve taking natural resources into social ownership under democratic control and halting the extraction of fossil fuels.

Climate change scientists tell us that there’s less than three decades left for the radical changes needed to prevent the worst consequences of warming the planet. The last few weeks have given us an early warning of what to expect.