When Trump calls “fake news”, remember who his friends are

5th May 2017Written by Penny Cole
Leave a comment 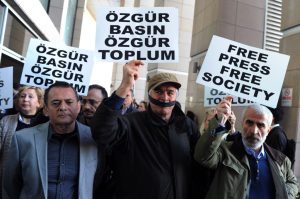 Three of Trump’s global friends have their own solution to “fake news” – jail or murder the journalists.

In Russia, Turkey and the Philippines journalists critical of the regimes of Putin, Erdogan and Duterte face prison or assassination.

29 journalists are currently on trial in Istanbul, held in custody since last summer’s attempted coup and accused of supporting cleric Fethulla Gulen, who is said to have orchestrated the coup from his base in the United States. Dozens of journalists are detained and more mass trials are expected, according to Reporters Without Borders (RWF).

The current 29 defendants face up to ten years in prison. A court ruled that 21 of them should be released, but as relatives gathered outside the prison they were re-arrested and new charges made against them. The judges who ordered their release were suspended. It is only a matter of time before they are arrested too.

Around 150 media outlets have been liquidated by presidential decree and more than 100 journalists are currently detained. At least 775 press cards and hundreds of journalists’ passports have been cancelled without any judicial proceedings. And censorship of the Internet and online social networks has reached unprecedented levels,” says an RWF report.

President Duterte of the Philippines is one of the first elected dictators to openly espouse judicial murder, and journalists are in the front line: “Just because you’re a journalist you are not exempted from assassination, if you’re a son of a bitch,” he said after a reporter was shot dead in Manila last week.

The Philippines is one of the most dangerous nations in the world for journalists, with 174 murdered in the last three decades.

But Duterte’s view is clear: “Most of those killed, to be frank, have done something. You won’t be killed if you don’t do anything wrong,” and he added that freedom of expression in the constitution does not necessarily protect a person from violent repercussions if they “defame” someone.

“The example here is Pala. I do not want to diminish his memory but he was a rotten son of a bitch. He deserved it,” he said to shocked journalists.

Duterte was referring to Jun Pala, a journalist and politician who was murdered in the city of Davao in 2003. Duterte was then mayor of Davao and Pala a vocal critic. Gunmen on a motorbike shot him as he left his office.

The Russian constitution also has clauses on freedom of expression and the press but that has not saved journalists. In 2006, Anna Politkovskaya was found dead in the lift of her Moscow apartment building shot twice in the chest, once in the shoulder and finally, in the head. Politkovskaya was a fearless reporter for Novya Gazeta  who wrote about Russian army atrocities in Chechnya and produced the seminal book Putin’s Russia, which charted the rise of a middle-ranking but ruthless KGB agent to a virtual dictatorship. Politskovskaya’s desk at Novaya Gazeta remains empty, as a reminder of her courage.

One of the stories Politskovskaya investigated was what happened in Beslan, North Ossetia in 2004, when Russian troops stormed a school where children were being held hostage by separatists and killed 334 of the children.

In September 2016 Politkovskaya’s young “successor”, Elena Kostyuchenko, and a photographer travelled to Beslan to cover the anniversary of the siege. Mothers of children killed by the Russian special forces  turned the memorial into a protest, revealing T-shirts with the words: “Putin is the butcher of Beslan”; they were arrested for holding an unauthorised demonstration.

The Guardian reports that Kostyuchenko and the photographer were followed, doused in green paint and beaten up during their time in the town. Kostyuchenko spent a week in hospital with concussion after being hit in the head (I apologise to photographers everywhere that I could not find the name of Kostyuchenko’s colleague).

In April this year Nikolai Andruschenko, Journalist and founder of the newspaper Novy Petersburg died from wounds sustained during a severe beating by unknown assailants. Andruschenko was a critic of Putin, especially of his accumulation of a massive personal fortune.

Trump on Putin: “He’s been a leader far more than our president (Obama) has been.”

Here’s another thing all three dictators have in common – they are presiding over a massive growth in inequality and poverty. Amnesty says Duterte’s “war on drugs” is actually a war on the poor. Average monthly wages in Russia fell 9.5% in 2015 and a further 8% in 2016. In Turkey, youth unemployment is 23% and the growth that built Erdogan’s popularity is fading away.

Trump just successfully removed health insurance from 14 million Americans. No wonder they all get on – they have so much in common. Reporting on them is not a crime – it’s a duty – it takes courage – and it’s not fake news!