“..it will take regime change…” 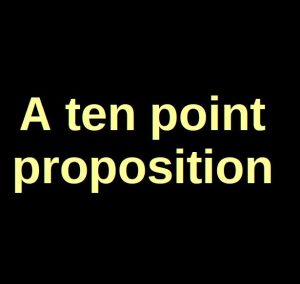 As the world’s temperature rises, and wildfires burn across southern Europe, the western United States of America and Canada, scientists warn that just three years remain for the emissions curve to be turned downwards if runaway irreversible climate change is to be avoided. In the Middle East, temperatures above 50oC are described as ‘ungodly’.

The UK’s Tory-DUP government is clearly not listening. It proposes to stop sales of petrol and diesel cars, but only in 2040. And what of the tens of millions already on the road?

For capitalist production to continue, nothing must be allowed to inhibit attempts to restore profitable growth.

Let’s all raise a small, ironic cheer for BMW’s electric mini to be built in the UK. The May government has clearly promised to force production costs (ie wages) down in Oxford, where the homeless are to be fined for sleeping on the streets.

A global network of innumerable trade deals implementing the investor-state dispute settlement (ISDS) system ensnare every country, subordinating their policy-making to the needs of transnational capitalist corporations. But, despite continuing injections of credit, low to negative interest rates, and reductions in real incomes for the majority, profitability of these corporations worldwide (as measured country by country) has not only failed to recover to pre-crash levels, but has been in decline for two years. Without the attraction of a significant rate of return, investment in new capital is stagnant at best. The consequence of historically low, slowing growth renders record global debt levels unserviceable and therefore unsustainable.

With no options left the arrival of the next crash is measured by the second.

A ray of hope? Bolivia’s Evo Morales says the country is now free of its dependence on the IMF and the World Bank.

We also must study the experience of Greece, where European and global agencies have colluded in their experimental attempts to see what might be rescued from the coming cataclysm.

GDP down by one third, incomes down by 40% etc….. Debt continues to soar despite three bailouts.

The IMF’s repeated calls on the EU to give the country debt relief have been ignored, but that hasn’t stopped it colluding in forcing successive governments down the path of more austerity, more privatization, more asset-stripping.

Wave upon wave of resistance, strikes, occupations, culminated in the 2015 election of a parliamentary alliance of left (Syriza) and right (New Democracy) refusing to implement the troika’s Memorandum. The July 15 referendum confirmed the stance by 61.3%, but the Troika forced a reversal.

Syriza is in government but not in power., slashing pensions further, whilst raising taxes. The country is caught in a double crisis of migration – as the boats arrive carrying thousands escaping war, 340,000 or 3% of the population mostly young left between 2010 and 2016.

Tsipras’ 2016 promise of a countrywide discussion on constitutional change has yet to materialise.

At least some of Syriza’s MPs remain hopeful that they will be able to begin to implement their programme of gradual transition, next year. One of them, Costas Douzinas, a leading intellectual in the government, but not formally a member of the party, says that the long, contradictory relationship between capitalism and democracy is over.

Nowhere is this more apparent than in Kensington, London where the survivors of Grenfell and their supporters are head-to-head with the council stooges of private capital asking ‘what does humanity mean?’

According to local campaigner Eve Wedderburn: ‘It will not take a generation’ to heal divides in the borough, ‘it will take regime change’.

So it’s time to reset society, to transfer all resources into social ownership.

Ten points towards a programme of regime change