How the 1% protect their wealth at our expense 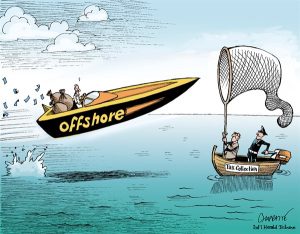 Early in 2016 it was the Panama Papers, then, late in 2017, the Paradise Papers. These massive leaks of files, no doubt by whistleblowers sickened by their own actions, blew huge holes in the web of secrecy surrounding the offshore economy that protects the accumulating wealth of the super-rich and the giant corporations.

Between the two revelations, but with much less blaring publicity came this book-length penetrating study of the 20,000-strong caste of “wealth managers” the “key actors in the global political economy” whose job it is both to advise and act on behalf of the world’s high and ultra-high net worth individuals.

Published after many years of conscientious work by sociologist Brooke Harrington, Capital without Borders clearly shows the weakness in recent EU moves against tax evasion.

Unusually, the author rejected the detached, objective stance of the academic who stands outside the subject matter, looking in. Instead, Harrington went for total immersion, putting herself through the full training programme leading to a professional qualification from the Society of Trust and Estate Practitioners (STEP), founded in 1991 as the age of “financialisation” matured.

Though not practising the trade, the qualification earned her an insider’s knowledge and the respect and cooperation of the 65 wealth managers around the world she interviewed over a period of eight years.

There are no headline-grabbing revelations, because all the many examples and sources are anonymised, but this is a fascinating and illuminating study of the bespoke tactics and techniques used by wealth managers, which don’t just reduce taxes paid by the super-rich to near zero.

They also serve to widen inequality and erode the living standards of ordinary citizens worldwide as the reduction of governments’ tax income forces cuts in spending on infrastructure and public services. Jersey, a long-term centre for wealth management with a single-minded devotion to offshore finance, is just one state which, with no alternative tax base left, is heading for bankruptcy.

“The black hole is so big,” according to Connect, a Jersey business magazine, that “filling it will take the equivalent of shutting down every school in the island, laying off every teacher, letting the parks turn into overgrown jungles and having our roads literally fall apart.”

Tax avoidance and evasion is a relatively small part of the story, however. Wealth has to be protected from many threats: the impact of family disputes, divorce claims, dissolute heirs, political retribution, inheritance laws, and heavens above – creditors! It’s a long list requiring specialist expertise to protect the accumulated wealth even from the wealthy who might want to spend it.

Updating relationships originating in 14th century feudal England, these trusted servants of the landed and now financially wealthy also write or help to write the laws, regulations and tax codes of the off-shore financial centres (OFCs) in which much global wealth is hidden from view, protected by complex layer upon layer of anonymous organisational structures.

If there’s any criticism of the book it is that the “without borders” title of the book is misleading. It is meant to reflect the interdependence of globalisation and the free movement of capital, and there’s an excellent chapter devoted to the complex and changing relationship between increasingly mobile capital, the role of wealth managers and the world system of nation-states.

But the real game is about exploiting the specially-written laws that operate in as many as 90 offshore jurisdictions – like the Caymans and the British Virgin Islands – which compete to attract the wealthy refugees from the real world where the rest of us live. They depend on borders, and not just to escape from taxation.

Wealth managers work hard to deepen the lack of international coordination, helping to develop legislation in OFCs “that specifically and intentionally contravenes the laws of onshore jurisdictions”. And there’s collusion from the likes of the UK, Ireland and Luxembourg, whose opposition to the EU’s tax haven blacklist shows them to be operating simultaneously as both on and off-shore players.

The many members of STEP are active as consultants, providing their expertise to on- as well as off-shore government administrations, working hard to guide the development of policy to suit the special circumstances of their many clients. In other words, the major capitalist states are complicit in the way the 1% protect their wealth.

A future Corbyn administration will need to develop and become part of a co-ordinated network of like minded governments and social movements if the globally-orchestrated power of the wealthy is to be broken up and transferred to the 99%.