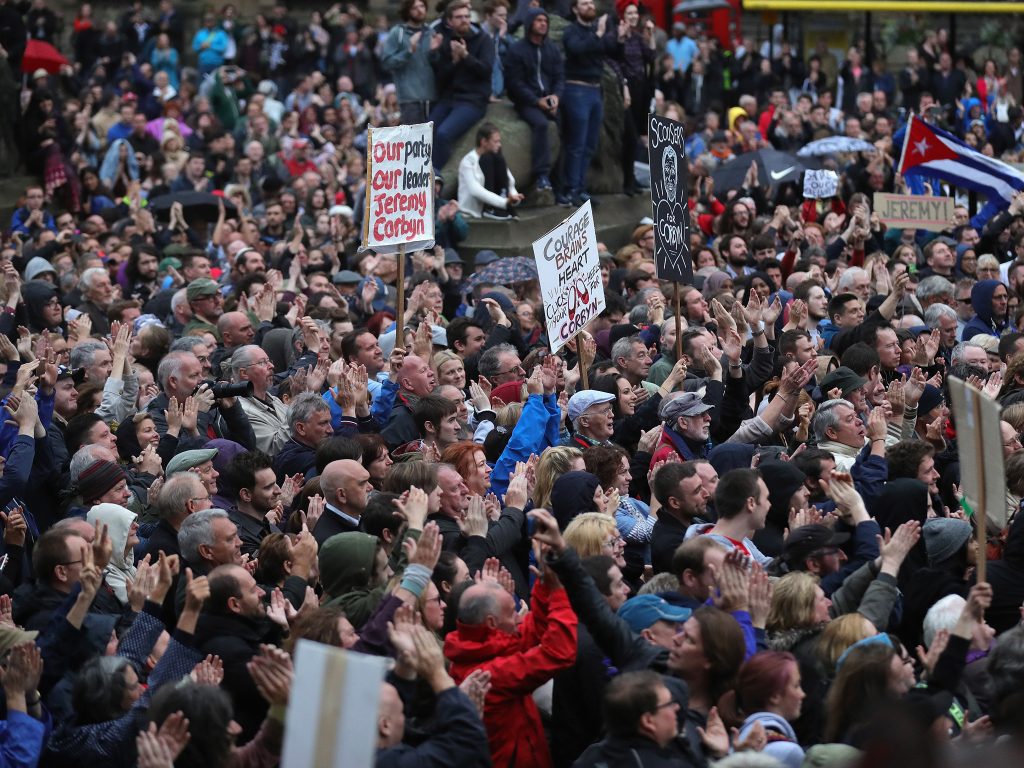 The popular social movement that swept Jeremy Corbyn to within touching distance of Downing Street should be sustained until the illegitimate, Tory-DUP government is removed from office and another election held.

Theresa May has no mandate to rule, having lost her overall majority by gambling on an unnecessary general election. The aim was to shore up her position inside the Tory Party. Instead, she is now a lame duck, a prime minister without authority both inside and outside her party.

So the Tories have linked up with the corrupt, ultra-right of the DUP from Northern Ireland, where they have blocked the formation of a new devolved government for sectarian reasons.

Let’s not wait for the Tories to ditch her and install someone else as prime minister, who will also lack a mandate. Build the demand for her and her minority regime to go now because, in practice, Jeremy Corbyn was the only winner.

Meetings, rallies, demonstrations, strikes, petitions and other actions should be organised to make the demand for a fresh election irresistible. A popular democratic movement can prevent May’s government from succeeding. It’s a big moment for the 99%.

This election was a blatant ruling elite power grab. They wanted to wipe out all opposition and create an elected dictatorship in advance of Brexit which would be carried out in the interests of the corporations and financial markets. Yet all the attacks of the billionaires’ media, which in itself shows we don’t live in a democracy, could not win it for May.

The election result is also a huge blow for Labour’s right-wing who have endlessly plotted and undermined Corbyn despite his two overwhelming leadership election victories.

In Scotland, SNP-style Indyref2 may have lost its sheen – but the demand for self-determination and independence in a real democracy cannot be extinguished, anywhere in the UK.

Corbyn’s break from Blairism brought hope of a different future, capturing the imagination of young people who turned out in vast numbers to eat into the Tory majority.

Although the increased support for Labour has effectively silenced Corbyn’s opponents for the time being, do not be surprised if they lend support to May when it comes to crucial votes in Parliament. The fight inside the Labour Party has barely begun!

By standing firm against the most vicious Tory attacks, Corbyn called into action a social movement that was inspired by his plans to end austerity, scrap tuition fees, properly resource public services like the NHS and education and abandon a militaristic foreign policy.

Corbyn showed conclusively that a new kind of politics is not only necessary but is possible and that even a hostile press cannot thwart its power.

Labour’s capturing of 40% of the vote – up by 10% in two years – expresses a desire for fundamental change that has to explore alternative paths to success as well as demanding a fresh election.

The election, coming on top of last year’s EU referendum, shows that the UK’s constitution, its system of rule, is broken and needs replacing.

Not only is the first-past-the-post system of voting deeply flawed, so too is the Parliamentary system which is supposed to be the highest point of representative democracy.

In truth, the system is increasingly a proxy for corporate power – a corporatocracy in place of a democracy – which polarises rather than brings communities and workers together.

A future Corbyn government would come under overwhelming pressure and attacks to back away from manifesto pledges. That is why the demand for another election should go hand in hand with a call for citizens to work on a new system of government.

Corbyn’s manifesto included a call for a convention on the constitution to address the issues of power and sovereignty. What the referendum and the election demonstrate is that overwhelming numbers of people are ready to overturn the status quo. Labour should take the initiative and help organise a citizens’ convention on the constitution now to make recommendations about how the 99% can exercise political and economic power and achieve self-determination of the different nations.

The Real Democracy Movement offers its support to actions that will bring about the democratic revolution that Corbyn has expressed backing for. Why not become a supporter and build the fire under May’s regime?

After London Bridge terror, Corbyn offers a vision of peace

Stop May’s plan for rule by decree by voting Corbyn