The collapse of Carillion and the threat to thousands of jobs worldwide is not just an indictment of the infamous public-private partnership model beloved of UK governments for the last 30 years. It signifies the impact of the debt crisis on the corporate sector globally.

Just look at the figures. In 2016, Carillion’s revenue grew by the apparently healthy 14% to £5.2bn, and boasted a market value of almost £2bn. But since then, following a series of profit warnings, its share price plummeted, leaving it worth just £61m at the end. It couldn’t go on.

Meanwhile, Carillion’s debts have soared to close on £1.5 billion. 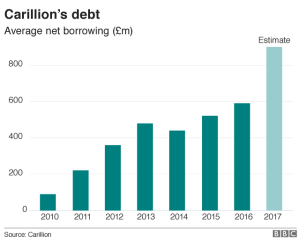 The May government continued to give it contracts, knowing the situation, in the forlorn hope that the company could pull itself together. In the end, the banks pulled the plug and the government has guaranteed jobs and wages – for those on public sector projects – while the aptly-named liquidators get to work.

Carillion is a clear case of private profit and public risk, with the taxpayers left to pick up the pieces (just like they had to when the banks went belly up in 2007-8). If there was ever a case for social ownership and democratic control of the main sectors of the economy, this is it.

The headline figures of 43,000 jobs worldwide, 20,000 in the UK, and a pension deficit of £600m don’t include the many thousands employed by hundreds of subcontractors, small companies whose future is threatened by the demise of the Carillion empire.

The company’s forced liquidation turns attention back from finance to the real world of concrete, steel and glass.

Until its collapse Carillion had grown to play a major part in infrastructure construction. You name it, and Carillion is there. Roads, rail (Crossrail, HS2), hospitals, iconic buildings (including the Tate Modern, Battersea Power Station and the Anfield Stadium extension). It was also a major provider of services: in prisons, schools, hospitals, 50,000 homes for the Ministry of Defence. Not forgetting the maintenance of GCHQ, the state’s centre of surveillance.

As befits a modern corporation, it had grown into a worldwide operation, by borrowing to buy up companies in the UK and in Dubai, Qatar, Canada (the Athabasca oil sands), China. Ironically its international strategy was informed by the need to protect its revenue from UK government spending cuts in the wake of the 2008 crash.

So what was Carillion really for? Buildings and services? Yes. But. Its real reason for existing, its major purpose, its central focus was on using its assets to satisfy the demands of its shareholders, cutting costs to maximize profits. And these owners of the company – a long list of investment funds and institutions operating largely through the off-shore economy, will be queuing up for their pieces of the action. To get a flavour of how it works, take a look into the world of finance currently being dramatized and glamorized by the BBC’s McMafia, based on journalist Misha Glenny’s 2008 book McMafia: A Journey Through the Global Criminal Underworld.

High on the list of shareholders is the Government Pension Fund of Norway – Norway’s income from oil. And way up near the top is Dimensional Fund Advisors which provides advice to many of the US pension providers. Ireland’s pension funds are in there too. All and many more are vulnerable.

The public-private partnership model began to take off in 1992-97 during the Tory government led by John Major. But it really flew under New Labour led by Tony Blair and Gordon Brown. As a TUC report notes: “The Labour Government introduced large-scale ‘quasi-markets’ in the delivery of public services, most notably within the NHS. At the same time, Labour introduced Public Private Partnerships expanding and intensifying the Conservatives’ Private Finance Initiative with contracts of huge scale and longevity for designing, building, managing and operating facilities including schools, prisons and hospitals.”

Estimates suggest that well over a million jobs are dependent on state contracts handed out to the private sector, with a value of over £100 billion a year. This was a leg-up to a corporate sector that found it difficult making profits in the usual capitalist way. Carillion could be the writing on the wall for this approach.

If (when) the government falls, Jeremy Corbyn’s administration would need a strategy that goes beyond taking public services back into public ownership. Taking on the company’s debts would be using public money to fill the gaps left by Carillion bosses after what amount to billions in taxpayer subsidies to bolster corporate shareholders’ profits. Carillion was not, it appears, “too big to fail”. Now the collapse of many debt-funded, cash-strapped enterprises like Carillion is a distinct possibility.

We are seeing system failure here. The alternative? Production for need, not for profit.