German expressionism’s night at the embassy

But for Frances Aviva Blane there was a kind of serendipity when her painting Fail was chosen for the Creekside Open. The Open is a visual arts competition set up by the cooperative studios and gallery space in Deptford, south London, aka the Art in Perpetuity Trust.

Her nearly one metre square oil painting will feature amongst 81 art works when the show opens this Saturday. 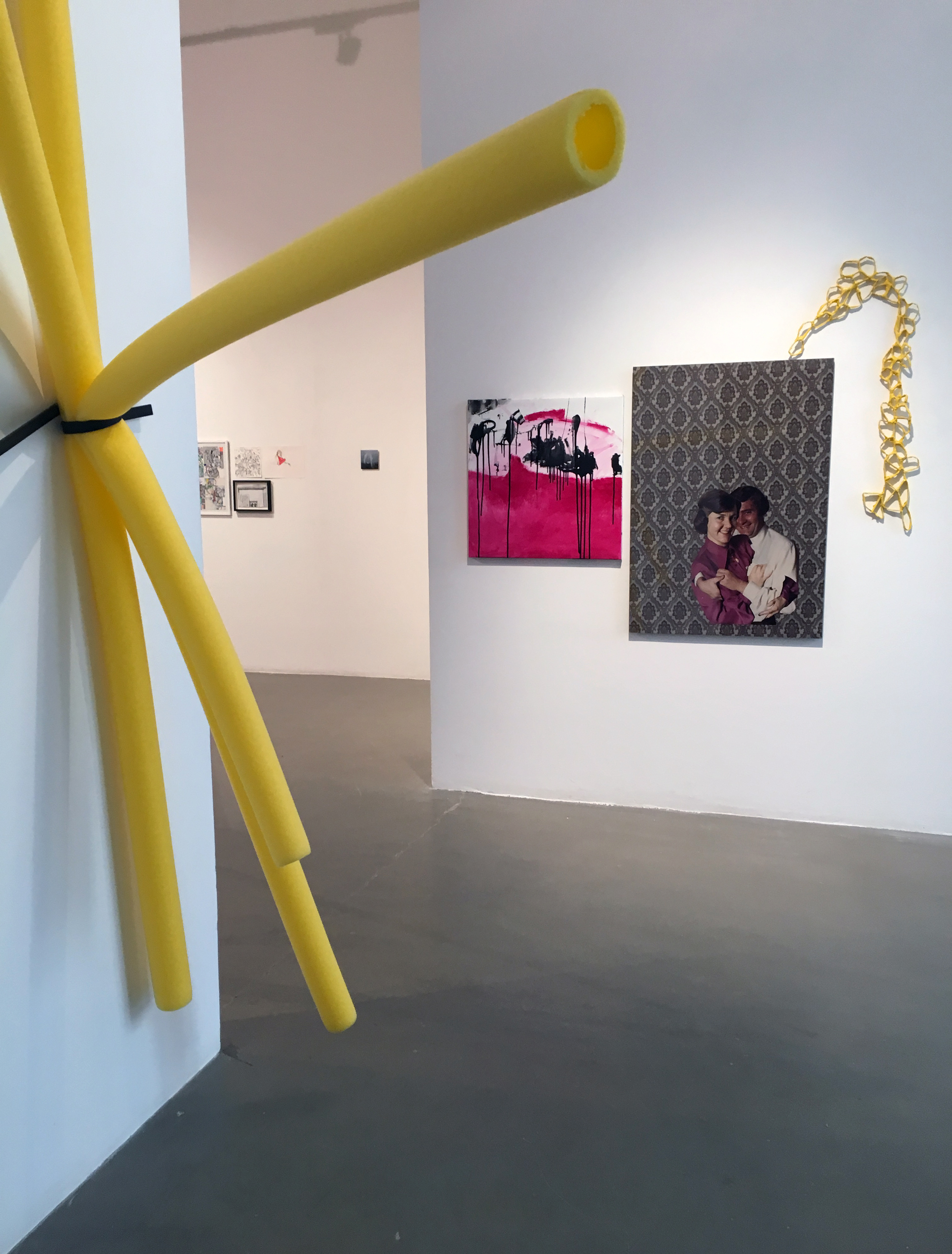 To be chosen by high profile sculptor-turned-filmmaker Jordan Baseman from nearly 2,200 images and 70 films is an honour indeed.

Baseman denies having any particular criteria in making his choices: “Kneejerk reactions and spontaneous responses have determined this gathering of ideas and things … Random. Yet chosen,” he says in his punk-provocative statement.

The good news arrived just as Frances was publishing her second large-format book, Embassy. Fail, illustrated half-way through, is archetypal Blane. Pared down to only three colours – pink, white and black – the black smudges and drips seem to indicate frustration and a botched exercise. And yet it is a work of beauty and balance.

The bold expanse of pink – the artist’s favourite colour – is subtly modulated with lighter and darker shades, while the black drips form a syncopated pattern, a calculated interruption. You feel the gliding movement of the brush in the black marks scumbling over the white.

So why is the new book called Embassy? Peter Ammon, the German ambassador to the UK, and his wife Marliese, installed Blane’s paintings in their Belgrave Square residence from July 2016 to January 2017. 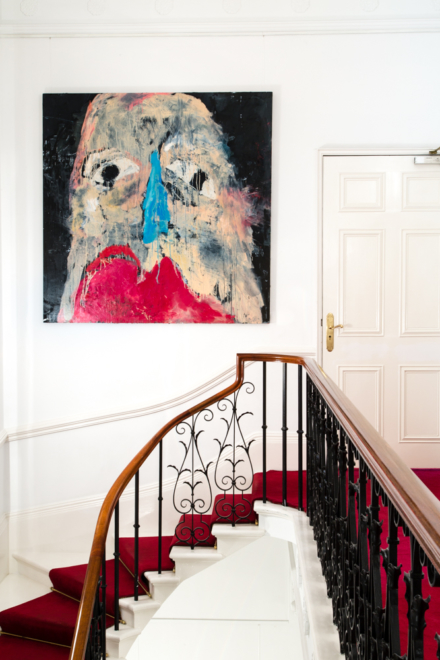 Its formal spaces provided a stunning environment.  The most shocking painting at the residence and in the book is Melt, hung in a prime spot at the top of the imposing stairwell. A blue nose oozing down onto the red-smeared (signature Blane) mouth below. A monstrously sad, clown-like face, looms out of a black ground.

Like Munch’s famous Scream and the work of his German followers, it conveys anguish, horror, nightmare, giant monsters. The early 20th century Expressionists reflected the conflicting emotions of Europe on the eve of destruction.

But Blane is determinedly here and now. She captures the pre-World War I angst of her German artistic forbears. Fast forward to the gestural innovations of American Abstract Expressionism. Then Blane goes several steps further for maximum emotional impact.

Melt is huge – the eye is drawn simultaneously to the gentle giant’s weird features and the physicality of the paint, the way it flows and dribbles. The melting paint becomes thought in liquid form.  It expresses pain and grief – disfigured yet shockingly beautiful, if you allow it to act on you.

As in the smaller Heads and other canvases, the colours are bright, spattered, like drops of blood. Fresh in feeling, they convey emotion with a few features, colours, scribbles. There is a child-like freshness and spontaneity but they are actually most sophisticated. Songs of innocence and experience indeed

Tess Jaray, Blane’s teacher at the Slade School of Art, notes in her foreword that she is “a continuing part of the great stream of Expressionist painting that emerged early in the 20th century in Germany and across Europe” and, of course, way beyond. The marks come, Jaray says, straight from the heart: “Her paintings are what she is”.

Aged one, Jaray moved from Vienna to London in 1938, when her parents emigrated to England, the year that the Nazis annexed Austria. It should never be forgotten that the great Expressionist artists – many of them Jewish – were denounced as “filth” and persecuted by the Nazis, after they seized power in Germany.  They were pilloried in the infamous 1937 degenerate art show at Munich’s Haus der Kunst. 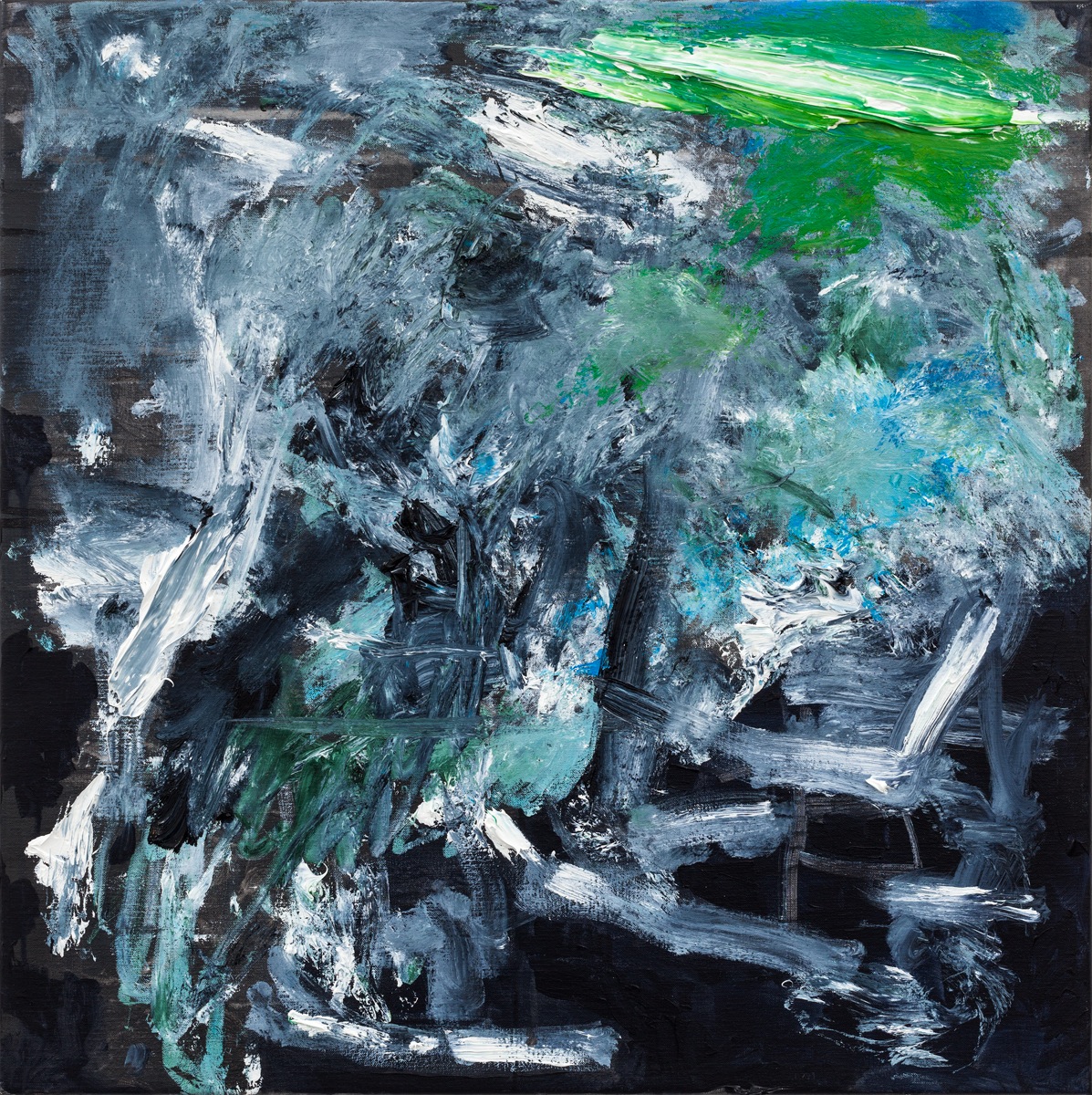 By displaying Blane’s work – so reminiscent of those “degenerates” –  the Ammons have made a bold statement. Hanging explicitly expressionist paintings by a contemporary Jewish artist has an historical resonance and sends out a message. Marliese Ammon has made a point of choosing, not only Blane, but others from conflict-torn countries, including artist-poet Darin Ahmad from Syria to place in her residence.

Joe Corr’s elegant book design, with its textured close-ups and sweeping vistas, does full justice to the installation as well as sumptuous new works.

The seventh Creekside Open runs from 6-28 May. The second half, selected by Alison Wilding, runs from 8 June-2 July.

The APT is a charity set up by artists in 1995 to secure a permanent space for studios after many had lost their own studio spaces in Greenwich. A wise move, considering ongoing gentrification.

Thanks to Liz May of the APT and Frances Aviva Blane for help with this article.