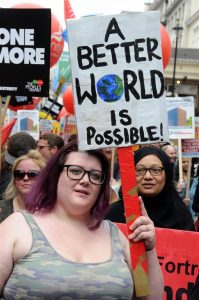 A clear message on July 1 demo

The Tories are playing for time, desperately trying to reorganise themselves after their harrowing election campaign.

That’s a good reason why we should step up the campaign for a fresh election and complete the unfinished business of June 8 by consigning Theresa May’s weak and divided government to history.

The tens of thousands on London’s streets on July 1 were of one voice that the Tories should go. As things stand, they will have to be made to resign and a new election called. Here are six sound reasons why asking the people to vote again is right:

How can a new election be achieved? For a start, you could sign the petition which calls for a fresh election and help build support for the idea.  Obviously, a petition won’t do the trick by itself. Nor will demonstrations and marches, however big unless they are followed up by actions.

Campaigns against cuts, in defence of the health service, for lifting the pay cap and for more resources for education could also include the call for a fresh election in their demands and sustain their actions until one is called.

The trade unions, whose leaders have sat on their hands for most of the time for the last seven years, now need to organise industrial action in defence of their members’ living standards.

It’s no use them moaning about how public sector workers have suffered a real loss of earnings under the pay cap because of inflation. They need to start mobilising their members for sustained strike action for higher pay and link it to a call for another election.

This may be construed as illegal activity under the notorious anti-union laws, but the time for pussyfooting around is over. This is a social emergency and the people should get another chance to exercise their democratic right to vote.