Back in the 1980’s, just about anything went. A lot disappeared. But one particular phrase emerged that stuck – sort of. It was called sustainable development. Even Margaret Thatcher thought it was pretty cool. But there was another development that emerged that really stuck. It wasn’t entirely new. It had been around for centuries in a different guise. But in the consumerist high tech society that was emerging during the 80’s, the neoliberal model had found a lucrative market in which to flourish. 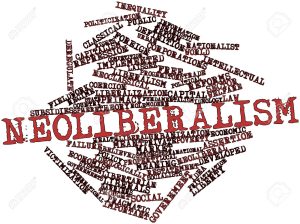 In 1987 Our Common Future was published (also known as the Bruntland Report). It set the blueprint for a sustainable future, which culminated in the Summit for Sustainable Development (Earth Summit) at Rio de Janeiro, Brazil in 1992. The future was looking good. But it sent the corporate elites into a panicking frenzy. Sustainable Development was an anathema to the economic logic of perpetual growth. The alter of short term profit – ‘the bottom line’ was sacrosanct. Political and economic changes would take place that would weaken the ‘green lefty’ advance.

In 1995, the World Trade Organisation was formed. This was in a sense the neoliberal response to what followed from the Earth Summit. In short, there was now a scientific consensus on the impacts of humans on the planet, specifically the inherent threat of global climate change.

The Intergovernmental Panel on Climate Change (IPCC) was formed in response to the Bruntland Report. The IPCC’s first assessment report was released on the run-up to the Earth Summit. The outcome of the Summit was the formation of the United Nations Framework Convention on Climate Change (UNFCCC). This passed the Kyoto Protocol in 1997 at the third conference of the parties to the Convention (COP 3) in Kyoto Japan.

The aim of Kyoto was to phase out greenhouse gases and cut back on fossil fuel use. But in an economic system that depends so heavily on fossil fuels and where so much wealth is concentrated, this was not going to be an option. So, in essence, a process begun that would weaken the UN process and bury the threat of sustainable development.

This was dramatically illustrated in two apparently unrelated events, but which were in fact intrinsically linked.

In 2003, US led coalition forces invaded Iraq, based on flawed intelligence and fabricated evidence. This was despite an overwhelming global opposition to the war that was unprecedented. Yet the global outcry was shrugged off as though it was a mild inconvenience.

In 2009, civil society again mobilised, this time at the UN climate summit in Copenhagen (COP 15). But the talks failed dramatically, despite an understanding prior to the talks that action needed to be taken in order to tackle the threat of climate change.

It was later revealed by Edward Snowden, following the release of classified documents to the press that the summit had been deliberately sabotaged by the US.

There can be absolutely no doubt regarding the high level corruption and abuse of power inherent within the current system. The above examples offer a stark reminder of that. As such, I think it is important that people understand the nature of power and the threat imposed upon us all.

The fact is, we are systematically destroying and undermining the life support systems that we all depend on. Climate change is a pressing example of this. But its more than that. We are engaging in the wholesale environmental degradation of the planet through pollution, habitat destruction, resource depletion as well as the impact of greenhouse gas emissions. These are interlinked systemic problems that need to be dealt with. If they are not then it will be impossible for our civilisation as we know it to survive. Because one of the most fundamental laws of nature dictate that an organism can only survive if sufficient resources exist to enable it to survive. Biologists call this ‘carrying capacity’. According to Wikipedia: The carrying capacity of a biological species in an environment is the maximum population size of the species that the environment can sustain indefinitely, given the food, habitat, water, and other necessities available in the environment.

The laws of physics

Perpetual growth is impossible. That isn’t an opinion, its based on the most fundamental laws that govern existence itself, namely the laws of physics, or more specifically, the laws of thermodynamics.

The first law encompasses the condition that energy can be neither created nor destroyed. However, energy can change forms, and energy can flow from one place to another. A particular consequence of the law of conservation of energy is that the total energy of an isolated system does not change.

It also defines the flow of heat: The flow of heat is a form of energy transfer. Heating is a natural process of moving energy to or from a system other than by work or the transfer of matter. Direct passage of heat is only from a hotter to a colder system.

This is important regarding the process of global warming and the greenhouse effect. To summarise: It is not possible to construct a machine which will perpetually output work without an equal amount of energy input to that machine. Or more briefly, a perpetual motion machine of the first kind is impossible.

The second law has also become known as the law of entropy. This has become a subject of discourse within economic theory. Put simply, the law indicates the irreversibility of natural processes, and, in many cases, the tendency of natural processes to lead towards spatial homogeneity of matter and energy, and especially of temperature.

From an economic perspective, a system is based in the physical world. As such it follows the laws of the physical world. In essence, if we use oil as an example, oil is in a state of low entropy. When burned it forms heat and CO2. These are dissipated in the atmosphere in the form of high entropy. i.e. all the available potential energy of the oil has been released and is no longer available. Some of the energy can be used as useful work, the rest constitutes waste that is of no use. As oil is a finite resource, it can no longer be replaced once used. As such, this represents a limit to growth.

Peak oil is something we’ve heard a lot of lately. What that means is that readily available oil resources are being depleted. Natural gas production is usually tied in with oil production. The result is that ‘conventional’ sources of oil and gas are disappearing. In order to perpetuate the cycle, there has been a transition to ‘unconventional’ sources of oil and gas. These are extreme forms of extraction such as fracking and tar sands.

One thing these have in common is that they are more expensive to extract, but they also require more energy to extract. This means that the Energy Return On Investment (EROI) is significantly lower than for conventional extraction. In other words, the more difficult it is to extract a resource, the more energy is required to extract it. This means that more of the potential energy from oil and gas needs to be recycled back into the system in order to continue further extraction.

To give an example of how this works. Hydro power has an EROI of 100. This means that hydro potentially has a constant energy output that could continue indefinitely once the initial outlay is recovered.

Coal is estimated to have an EROI of 80. Traditionally coal was relatively easy to extract and had a very high thermal value.

Comparing with oil and gas, back in 1970 oil and gas was valued at 30. Fast forward to 2005 and the figure had halved. Today, conventional oil and gas production is likely around 12 – 13. Compare that with shale oil and gas with a value around 5 – 7 and tar sands with an EROI of only 3. What this means is that for every 3 barrels of tar sands oil produced, one has to be burned in order to continue the process of extraction. As shale oil and gas become more difficult to produce, the figure will likely drop to around 4.

Its quite clear to any rational person that the more difficult it becomes to extract fossil fuels, the more economically infeasible the process becomes. We hit a scenario where most of the energy we extract needs to be used to extract more of the same. It is simply unthinkable that our current system could survive such high levels of inefficiency. It would be impossible to sustain such a system. The inevitable result would be wholesale economic collapse. Couple this with other threats such a climate change and the future doesn’t look too rosy.

Needless to say the problem lies with the system. Unless the system is changed or replaced by something else our very survival is under threat.

Our global system is being run by people who are highly self deluded. These are wealthy élites who believe that money can buy anything, even a place in heaven when the proverbial shit hits the fan. The military, fossil fuel industrial process will continue unabated until it can no longer function. What happens inbetween is anybody’s guess.