NHS needs a strong dose of democracy for its 70th birthday 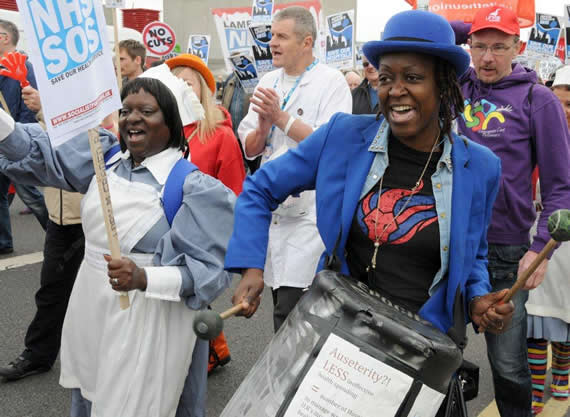 The National Health Service remains the greatest achievement in the ongoing struggle for social justice in Britain and the best way to mark its 70th birthday is to move forward into a new era of democratic control and accountability.

Inspired by the collective efforts of pre-war miners in South Wales who collected a subscription to fund their own doctors, the NHS is living proof that a public service with a million or so workers can function on a not-for-profit-basis.

But the NHS was a kind of compromise from the start. Aneuran Bevan, the health minister in the Attlee government who fought tooth and nail to set up the NHS in a period of great austerity following World War Two, had, for example, to allow GPs to retain their status as private businesses within the service.

From the outset, the NHS was dependent on capitalist pharmaceutical firms to develop and supply medicines and drugs. The bill has mushroomed to reach over £16 billion a year. In hospitals alone, the medicines’ bill rose by an astonishing 60% in the four years to 2015. Overall, the total drugs bill rose by almost 20% in the same period.

Initially, prescription were free but charges were introduced by the second post-war Labour government in 1950, leading to the resignations of Harold Wilson and Bevan. Since devolution, prescriptions are free once more in Scotland, Wales and Northern Ireland but still paid for in England.

When New Labour’s love-in with neoliberal capitalism began, the health of the NHS began to deteriorate under new burdens. The creation of hospital trusts – as a business rather than a health model – introduced a market-driven, results-based system that is still with us.

Then, as original hospital buildings became unsuitable and out of date, neoliberal “solutions” led to the dreaded Private Finance Initiative so beloved of the then chancellor, Gordon Brown.

The NHS has more than 100 PFI hospitals, which cost around £11.5 billion to build. When the contracts have expired, they will cost UK taxpayers nearly £80 billion. One hospital trust in north-east London spends nearly £150m a year repaying its PFI debt – nearly half of which goes on interest payments.

A 2017 Centre for Health and the Public Interest (CHPI) publication – based on 107 PFI contracts in England – said companies involved in PFI had made pre-tax profits of £831m in the previous six years.

Colin Leys from the CHPI, said: “This report shows for the first time the huge amount of taxpayers’ money which is leaking out of the NHS through the profits generated by PFI companies.”

So while it’s “our NHS”, unfortunately it is also theirs.

Then there is the bureaucracy, the secrecy and the sheer lack of accountability for decision-making. The latest incarnation are so-called Sustainability and Transformation Partnerships (STPs) which are responsible for drawing up the future shape of the NHS around the country.

Add in the fact that trusts are run by highly-paid bureaucrats and tiers of senior managers, and you have a health service held hostage by corporations and run in the interests of efficiency and profit rather than those of patients and NHS workers.

Meanwhile, other significant aspects of health care are either neglected or privatised – social care and mental health are prime examples – or, in the case of dentistry, the best treatment is only available through a private service.

So if the NHS is to last another 70 years, we need some real, democratic transformation along these lines:

* End bureaucratic control and secrecy by putting future plans directly in the hands of local communities and NHS staff.

* Put hospitals and other health services under the control of patient groups and staff.

* Integrate health, mental and social care into a properly-funded system and make the best dental treatment available to all for free.

* End prescription charges in England; bring back existing privatised services into the NHS.

* Bring back into NHS employment all medical, clinical, admin and clerical and ancillary staff currently employed by private contractors.