No to bombing Syria! 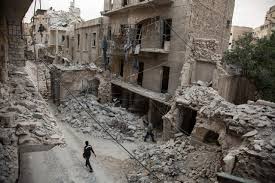 The US, UK and French airstrikes are an attack on the Syrian people first and foremost. Whatever the source of chemical weapons, brutal bombing and military intervention will worsen their already desperate situation.

Syria is a killing field for warring big power interests – the UK, France, US, Turkey, Saudi Arabia, Iran and Russia as they engage in a world war in miniature.

Leaders of these states have again and again shown their disregard and even contempt for the lives of Syrians. Syria has been dismembered, its people killed, its cities and culture destroyed.

Chemical weapons have been used time and again in the Middle East, including in the Iran-Iraq conflict , while Britain and others stood by. Intervention has only stoked the fires of ISIS terrorism and brought yet more repression.

Whatever the reasons, none of them have anything to do with help for Syrians. The countries that have fomented this crisis now treat Syrian refugees as pariahs. They have no real concern for them. If they did they would flood the country with aid and doctors, not bombs.

Great power games are stoking up ever greater dangers. The only way of achieving peace is a withdrawal of all foreign military forces and their backers from Syria, and international recognition of the Syrian people’s right to determine their own future.

We support the Corbyn leadership’s demand for a vote in parliament. We salute his refusal to join in warmongering and his call for an unbiased investigation. Medical and humanitarian services as well as journalists must be allowed to operate in Syria without fear. Whatever the result of inspections however, we oppose any military action by the UK.

The only way to stop the warmongers is by developing a movement for real democracy to transform the way we are governed. Please support the Real Democracy Movement to make this change.