One man’s quest for the truth

This is the story not just about the artefacts of a revolution, but about one man’s dedicated struggle to restore the truth of what happened in the Soviet Union during and after 1917.

David King, who died last year, was a renowned practitioner and historian of graphic design. In 1970 he was sent by The Sunday Times to research Soviet archives.

King discovered that all traces of Leon Trotsky, Lenin’s co-leader of the 1917 revolution, had been removed. King decided then and there to leave no stone unturned in filling the blank spots of Soviet history.

Researching and bringing together missing images and defaced ones became a life-time passion and he went on to assemble some 250,000 artefacts. 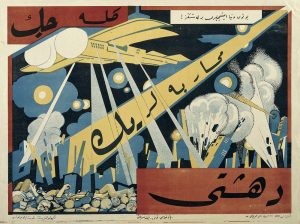 Red Star over Russia at Tate Modern is drawn almost entirely from his magnificent collection.

King’s efforts to restore to memory the countless victims of Stalinist repression by tracking down original documents make up a large part of this show. By setting originals side by side with the doctored versions, King provides incontrovertible evidence of the ruthless re-writing of history.  People had to be removed not only from life but from all images in order for the Stalin myth to prevail.

The present-day relevance of King’s work was demonstrated only this week. The Guardian chose to illustrate an article about the Bolshevik revolution with a photograph of Lenin addressing soldiers in Theatre Square, Moscow. The exact same photograph appeared in the London Evening Standard alongside some book reviews last February. 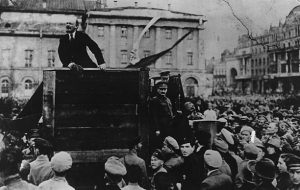 Lenin addressing troops in 1920, with Trotsky on his left. Photo by Dmitrii Goldshtein, 1920 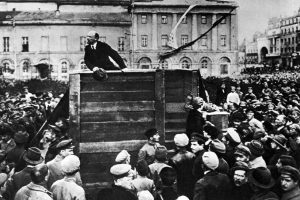 Both feature an empty staircase to Lenin’s left. This is where Red Army leader, People’s Commissar for Military and Naval Affairs, Trotsky actually stood at the time, but was airbrushed out by Stalin’s minions.

The original photo with Trotsky in it, taken in 1920 by Soviet photographer Grigorii Goldshtein, is part of the Tate’s show which opened to coincide with the centenary of the Russian Revolution.

It reveals the huge political events and transformations of the period through a new and daring visual ecology created by countless artists, designers and photographers.

Art education was placed into the hands of artists. They sought to create a new, futuristic culture.  Experiments in theatre, architecture, book production, clothes,  posters, sculpture and films reached deep into people’s hearts and minds. 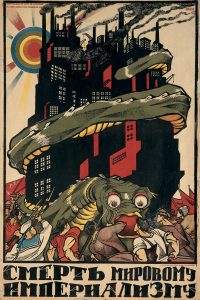 As co-curator Natalia Sidlina has said, these were not simply fellow-travellers of the revolution. For example, Moor signed his 1920 poster Be on Guard (which includes a text by Trotsky) at a time when posters were usually anonymous. The outcome of the Civil War was still undecided and a designer could risk death if the wrong side won.

The second half of the show contrasts the impact of the 1937 international exhibition in Paris, which featured not only Picasso’s painting Guernica but also a giant mural by Aleksander Deinika.

His study for the USSR pavilion is borrowed from the Perm State Art Gallery, an example of the “socialist realist” style imposed on artists by state decree.

The artificial optimism of Deneika’s white-suited figures was a gloss over a dark reality. The year 1937 marked the height of the Stalinist terror in which millions were arrested and murdered, including Lenin’s closest allies and well-known revolutionary artists such as Klutsis. 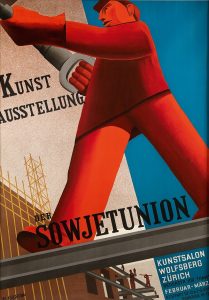 Tate Modern director Frances Morris explains in the exhibition booklet: “…Stalin ensured that a posthumous cult of personality was built around Lenin’s memory, while, out of rivalry, seeking the total eradication of images of Trotsky. It was this systematic suppression of one set of imagery and the associated falsification of another in order to construct fictional histories – the ancestor of Photoshop and ‘alternative facts’ combined – that David King sought to unveil in his research and publications…”

Red Star over Russia is an inspiring tribute to King and all those in the Soviet Union and elsewhere  who sought to excavate and keep alive the true history of the Russian revolution.

A photo-tour around King’s home with a revealing commentary can be viewed here on Tate Modern’s website.

"Schools are out of their depth, out of options and out of time. They are risking the lives of their students and staff just so they can reopen on the 1 June." Union sec slams Lib Dems in York & claims some teachers being asked to do cleaning. Shocking.
https://www.yorkpress.co.uk/news/18478038.york-schools-out-depth-options-time---says-union-chief/?ref=twtrec

More evidence that Johnson-Cummings junta is lifting the lockdown without proper planning, consideration of the facts & against scientific advice. Accountability is non-existent. This is a dictatorship in all but name. Bring on a democratic revolution.
https://www.independent.co.uk/news/uk/politics/coronavirus-lockdown-restrictions-cases-deaths-threat-level-boris-johnson-a9538751.html

This week OpenDemocracy revealed that @BorisJohnson’s father, Stanley, had an IT technician from a private university make a 300-mile round trip (with young son in tow) to fix his laptop. As you do during lockdown. Ask Cummings.

Thanks for your support Zoe!

A big revolt against the Johnson-Cummings duopoly could well come on Monday when tens of thousands of parents decide NOT to send their kids back. Loss of confidence in Bojo's regime palpable. Best make our own decisions about surviving the pandemic. Guidance, what guidance?