Political and constitutional crisis, the rise of populism and species extinction surround us. At the same time, galleries and museums are offering a huge range of art, contemporary and historic. The Tates and the Barbican are featuring Frank Bowling, Dorothea Tanning, and Lee Krasner who until recently were sidelined for reasons of gender and race. It’s great to see historical and aesthetic justice being served.

Goncharova and her lifelong partner Mikhail Larionov burst on the Moscow art scene on the eve of World War I. She was a Pussy Riot figure whose first solo show in 1910 sparked a press campaign against her.  Her depictions of powerful female nudes and pagan religious narratives were denounced and paintings were confiscated by the Tsarist authorities. She was put on trial for obscenity offences.

To our 21st century eyes it’s hard to see why her Evangelists in particular would have caused such offence. They actually look very pious. But at the time the orthodox Church’s Holy Synod denounced them as “a blasphemous counterpart to the ‘Anti-Christ’.

Thanks to Bloomsbury group critic/theorist Roger Fry, Londoners could soon view the cause of the sensation as early as January 1913. The Evangelists were included in his Second Post-Impressionist show in London’s Grafton Galleries. They were acclaimed as “beautiful decorations”.

But notoriety was grist for the artist’s mill. In September of that year, in collaboration with Larionov, she staged a huge and successful retrospective in Moscow’s Art Salon, with around 750 paintings, drawings and designs. It was a master stroke, laying down a huge marker for a woman artist.

Room 3 at Tate Modern evokes the spirit of that moment, re-uniting seven parts of her monumental Harvest cycle. These bold orange and blue mythical figures are now dispersed in Russian and French holdings. Some reappear in Mystical Images of War, a group of lithographs from 1914. Dramatic, pared down images convey feelings of apocalyptic shock. The horror of mechanised war is conveyed through mythical icons: a cockerel, St George and the dragon, bi-planes, avenging/mourning angels, the Mother of God, marching soldiers accompanied by a heavenly host.  Larionov was badly injured in the first few weeks of the war.

The couple picked up and ran with all the latest developments in modern art. Moscow was one of the best places to see Cezanne, Matisse, Picasso, Gauguin, Derain and other modern masters. Their influence is apparent.  Goncharova saw Western European modernism as a challenge to be emulated and taken to further extremes through the prism of Russian folk art and peasant traditions. She simplifies, flattens and exaggerates shapes and introduces the hottest colour combinations possible. These pioneering works are drawn from Moscow’s great State Tretyakov Gallery and collections in the republic of Tartarstan and elsewhere .

The early spaces capture the moment when Goncharova synthesised folk art with extreme Modernism. But there are some yawning blank spots. Missing is the sense of historical destiny that she shared with her contemporaries East and West, the powerful Zeitgeist that pervaded in the pre-World War I and revolutionary times.

As Russia entered modernity and Tsarist autocracy broke down, Goncharova-Larionov were at the heart of an international movement in which artistic innovation in the West fired up artists in the East and vice versa.

They exhibited in Munich alongside Kandinsky with the Blaue Reiter (Blue Rider) movement in 1911-12. Kandinsky’s partner Gabriele Münter had discovered Bavarian folk art a few years earlier. Münter was an equally pioneering female artist who hailed from Berlin.

There was also a close interchange between Russian and Italian movements. Goncharova was hailed as the leader of the Russian Futurists. She met Italian Futurist leader Filippo Marinetti early in 1914 and is said to have contributed to a Futurist exhibition in Rome later that year. Goncharova and Larionov lived in Rome for six months between 1916-17, meeting all the key Futurists and publicising their own work. Their link with Italy was never broken.

The symbiotic relationship (to use Finnish National Gallery curator Timo Huusko’s expression) with Larionov is played down. And yet how many artistic couples collaborate and live together for 50 years? Larionov was her organiser and publicist, and a significant painter in his own right. But this show pays only token tribute to their relationship. As Modern Couples at the Barbican revealed, they were one of modern art’s great inseparable duos. Goncharova was a daring woman, but she was not alone. The Russian avant-garde was marked by the high profile of female protagonists: Liubov Popova, Olga Rozanova, Ksenia Boguslavskaia, Nadezhda Udaltsova, Varvara Stepanova and Alexandra Exter. All but Exter were one half of an artistic couple.

Born into a liberal family, visitors to the family estate south of Moscow,  Goncharova grew up in a musical and theatrical atmosphere which welcomed such guests as critic and writer Anatoly Lunacharsky, who was appointed by Vladimir Lenin to lead the Commissariat of Enlightenment after the Bolsheviks took power. The Goncharovs were social democrats who supplied Lunacharsky with free paper for his newspaper.

Travelling between Paris and Italy, Goncharova was excited by the 1917 revolution, eagerly seeking news. Her work was included in the holdings of the First and Second Museums of New Western Art. Under Lunacharsky’s Commissariat, a Museum of Painterly Culture (MPC) was created, directed by Wassily Kandinsky. The MPC actively collected work from leading avant-garde painters, including Goncharova. Its collection was eventually transferred to Moscow’s Tretyakov Gallery, as its present director Zelfira Tregulova explains in the exhibition catalogue.

The abiding feeling is that Goncharova is the most Russian of artists. And yet, from 1916 to the day she died in 1962, she and Larionov made their home in a Paris flat, never to return to the Soviet Union. Tregulova goes some way to explaining why the couple spent some 46 years of their life in exile. In a puzzling understatement she writes: “The period from the 1930s to the 1950s, however proved an unfavourable time for the avant-garde”. Unfavourable? In reality, the Stalin counter-revolution of the 1930s, which forcibly imposed the Socialist Realist style, proved disastrous and even fatal.

The couple desperately wanted their legacy to return to Russia, registering their marriage in Paris at the age of 74 to ensure this. Their wishes were fulfilled by Larionov’s second wife, Alexandra Tomilina: paintings: the couple’s personal archive were eventually transferred to the Tretyakov Gallery in 1998. There they joined other treasures donated by Greek collector George Costakis and ballerina Anna Galina. 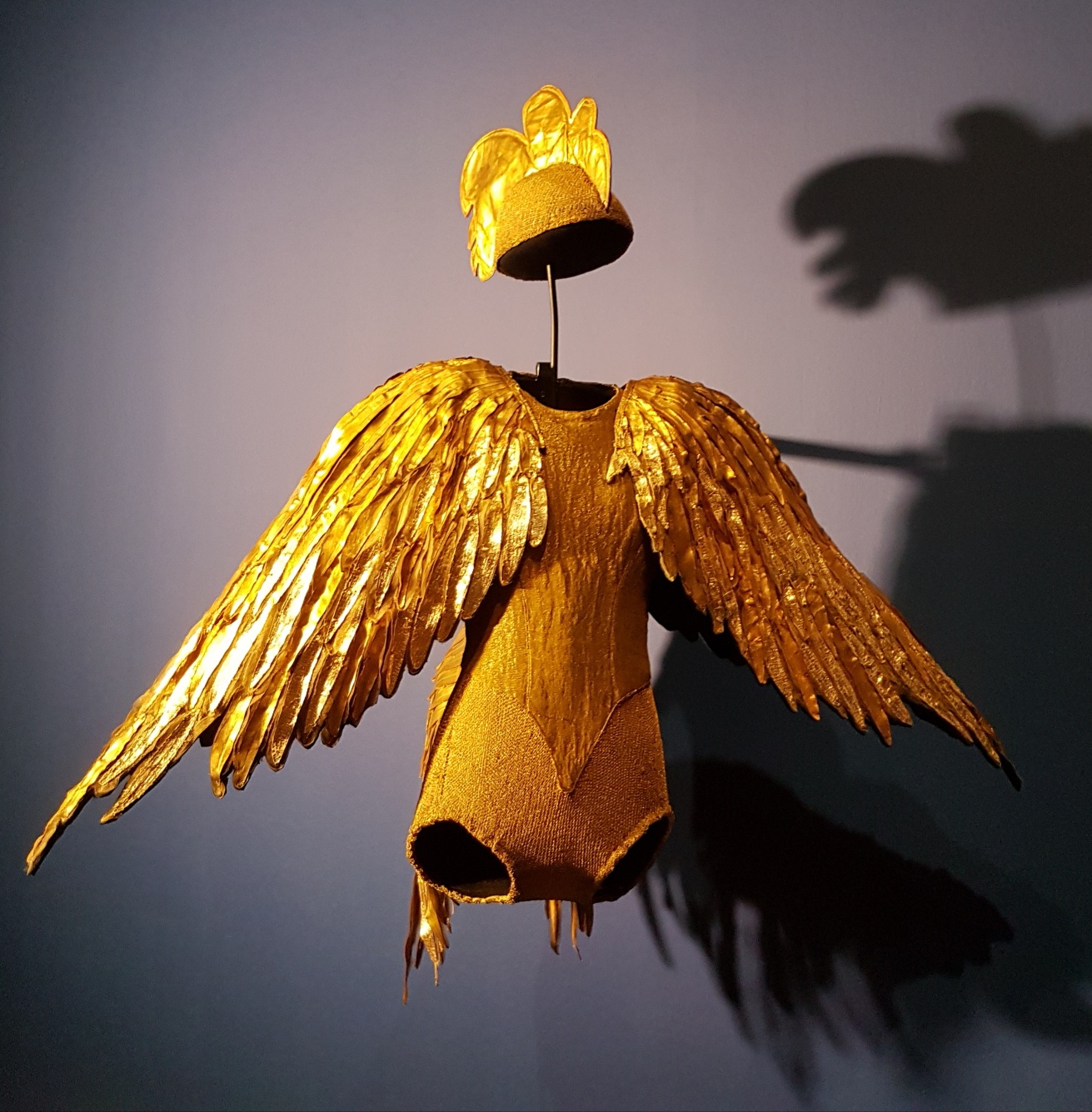 Costume for the Golden Cockerel 1937

The final space at Tate Modern is devoted to theatre and ballet designs, many of them commissioned by the great Russian impresario, Sergei Diaghilev, for his Ballets Russes. The beautiful costumes for Rimsky-Korsakov’s Firebird and Stravinsky’s Le Coq d’Or  (The Golden Cockerel) appear like magic, brilliantly lit against a deep blue  background.

The lamé and silk-knit costume for the Golden Cockerel (from Los Angeles) with its marvellous feathers is breathtaking. But here, with these exotic costumes and designs from the 1920 and 1930s, we reach an abrupt stop.

The bird seems an appropriate and poignant symbol for an avant-garde swept up in history.  Sadly, the curatorial silence about the ups and downs of revolution leaves Goncharova’s work floating in a visual-historical vacuum.

Natalia Goncharova is at Tate Modern until 8 September. Open daily with lates on Friday and Saturday. It travels to Palazzo Strozzi in Florence (from 28 September) and the Finnish National Gallery in Helsinki (21 February 2020).