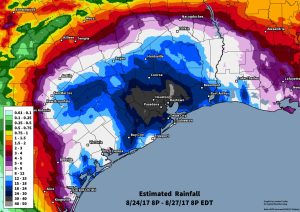 The flooding in South Texas, Louisiana and beyond is an expression of the crisis of global and national governance that has abandoned people to the impacts of climate change.

The world has watched astonished as the authorities in Houston, one of the world’s richest cities, have been overwhelmed by the unprecedented rainfall brought by Hurricane Harvey. In the end Harvey was downgraded to a storm, but the rain was something else.

Thousands have been rescued; thousands more await rescue. Thousands are  in temporary shelters in convention centres, schools, church halls and who knows when, or if, they will be able to return home.

In a deeply unsurprising echo of Hurricane Katrina, it is the poorest Americans, living in cheaper housing areas out near industrial zones, who are suffering the most in Houston.

The Texas oil capital has been booming – one of the US’s most rapidly expanding cities and much of that expansion was into flood plains that in the past would have to some extent protected the city, acting as a soak-away.

Ironically, Exxon Mobil, the company that knew all about climate change but lied about it and paid others to lie about it, has been forced to close its Baytown Refinery, the second biggest in the world. It has been fatally damaged and the company warn that it may release toxic chemicals into the air.

All along the coast of Texas, where storm surges have driven water inland, are refineries and chemical plants that are central to the US economy. And of course, petrol prices already rose 5% and will rise further as gouging and profiteering begins.

More than two feet of rain was measured at Houston’s George Bush Airport over the weekend. The National Hurricane Centre says up to 20 inches more can be expected.

There are two climate change factors at work here: Hurricane or storm force winds pick up massively increased quantities of water vapour from the warming oceans and dump it over the land in what are now being called “rain bombs”. And the fact that sea levels have already risen means that coastal surges drive further inland. You can read more from Penn State’s leading Climatologist Michael E Mann here and more about ocean warming in this article from Yale Education.

That global warming is already causing changes in climate – extreme rainfall, extreme heat and drought – is the key theme of former Vice-President Al Gore’s new film An Inconvenient Sequel – Truth to Power. It powerfully catalogues what is already happening and what will happen and is a must view for that alone.

But what it entirely fails to do is to explain why, in light of this reality, states are entirely incapable of acting to cut harmful emissions or prepare for the now inevitable weather events.

It portrays the Paris climate agreement as a major achievement (mainly Al Gore’s, apparently). It leaves out that it actually made 2 degrees of warming inevitable, put millions of lives and livelihoods at risk, triggering waves of forced migration, hunger and disease. Paris was a failure of world governance, exposing states’ inability to prioritise the needs of the many over the needs of a few transnational corporations.

With Hurricane Harvey, the crisis of the American state, of American democracy is laid bare. Politicians can lie about climate change, even take money from fossil fuel companies to go on lying – and they can even convince many Americans. But they can’t hold back the rain, or the tides, put out the fires or cool the heat.

Just as at Grenfell Tower it is the workers of emergency services, deciding themselves what to do and doing it bravely, and community volunteers who really take on the challenge. Politics and elected politicians prove to be pretty useless because this is new reality cannot be “coped with” or “managed”. It is an increasingly extreme, volatile reality. Unthinkable levels of damage are unavoidable. The question begins to arise, are coastal cities habitable? How often can they be inundated and recover?

In the meantime the idiot in the White House, who only days before the hurricane hit scrapped Obama-era flood protection regulations, is boasting to the world about how brilliantly the authorities are responding.

And the only person close to a leader the Democratic Party has at present, Nancy Pelosi (Democrat Leader in the House of Representatives) put out a statement that made no reference to climate change, to Trump’s abolition of the flood prevention regulations or to any other political meme that could offer some kind of alternative perspective or leadership.

Is this not today’s reality? That the democracy we have can’t defend us, because that is not its role? It is there to defend the status quo. It collaborates with the corporations to put us at the mercy of climate disaster.

We are told that political revolution would lead to chaos and breakdown – but what we increasingly see is the present states presiding over chaos and breakdown, and only the actions of ordinary workers, ordinary people proving worthwhile and valuable.

Therefore when anti-capitalists say that we have to start by changing the economy, or challenging “wealth” or “money” that is a very limited truth.

Yes, we must urgently change to a system of production that meets people’s actual needs – and end a system that puts life on earth at risk solely to produce commodities whose use value is dubious and whose exchange value has to be rammed down our throats with ideological force and borrowed money.

But to do that we must first transform the system of governance, the state, the constitution. The rule of the corporations is channelled THROUGH laws and institutions that exist to defend private property and themselves. Therefore to tackle the economic crisis and the resulting climate crisis, we have to start there. It is not enough, as Al Gore says, to “speak truth to power”. We have to take the power. A transformation to REAL democracy is our urgent and main priority.