Trade unions at the crossroads as TUC marks 150th birthday

In June 1868, trade unions in Britain came together to launch a combined organisation. As the TUC  — Trades Union Congress — celebrates its 150th birthday, the movement faces, arguably, its biggest battle for survival. Peter Arkell reports.

Membership of TUC-affiliated unions has fallen relentlessly to reach a new low today of just over 6 million, from a high of over 13 million in 1979. Just 15.7% of workers under 30 are in a union, down from 20% in 2001. Real, take-home pay of many trade unionists has gone down sharply since the imposition of austerity policies.

Union leaders are busy putting forward all the correct excuses for this steep fall in membership since the election in 1979 of the Tory government of Margaret Thatcher: the destruction of the country’s manufacturing industries, globalisation, hostile anti-union governments; loss of good well-paid jobs; slumps and recessions; precarious employment and insecurity at work, zero-hours employment; atomised supply chains and so on.

But what they have not done is to address the entirely new political and economic landscape that has arisen during the last 40 years. Nor have they been able to devise a new strategy with which to meet the changes. They have, for the most part, stood by while the world economy has undergone a transformation entirely in the interests of the banks, the big corporations, private interests and capitalism in general.

Of course the trade union leaders are not the only people blinded and paralysed by this neoliberal agenda.  The Labour Party, originally created by the unions to be its political arm in Parliament, has, until recently, been a willing partner to the corporate-driven globalisation project. And thanks to this betrayal, the interests and rights of ordinary working people, have been entirely subordinated to the requirements of big business.

But with the economic crash of 2008 and the years of austerity that followed, the wheel has turned. The old politics have been turned inside out, and with it all the old certainties. Social upheaval is on the agenda. Right-wing populists make their play with policies that leave the banks and corporations untouched while pretending to be concerned about the needs of the people. Meanwhile the Labour Party, under Jeremy Corbyn, finally brings back the old ideas of socialism – equality, co-operation, sharing, the commons, health for all, housing for all, education for all, sport for all and so on.

It is this changed world, this new world of contempt for the old values of the establishment and their parties and their parliamentary games that now provides the backdrop against which the debate for the future direction of the trade unions must take place. 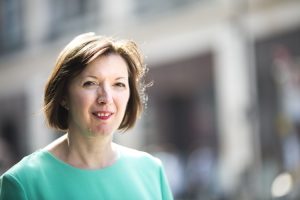 Frances O’ Grady, the TUC general secretary and the first woman to have the job, in an interview with the Guardian, recognises that these are “precarious times” for Britain’s workers — unions will have to change or die, she says. She makes the very interesting, radical call for a “civil rights movement for young people”.  And she calls for trade unions to draw on their history of innovation and daring and to take a few risks. “We won’t succeed on every front, but if we don’t try … we will surely fail. So we are going to try.”

And she is further quoted: “If we’ve got a digital economy we’ve got to have digital trade unionism. And if we have young people whose bosses will do everything they can to avoid recognising a union, we don’t walk away, we reinvent ourselves, we do something new. If you can’t get through the front door, you go around the back. I want that spirit that we are a ‘have-a-go’ movement.”

The question is: Will these kind of changes, plus a new spirit, be enough to win new members? Will they infuse new power into the unions?  Or is there a more fundamental failing in the ideas and perspectives of the unions in this new era? 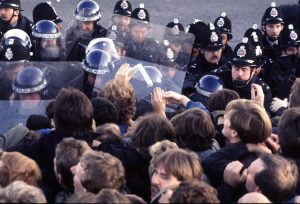 As implied by O’Grady, the unions can no longer confine themselves to defending conditions and wages or to claiming a larger share of profits for workers. While these kinds of demands once produced results, they have been spectacularly unsuccessful since about 1980. The employer either re-locates the factory to somewhere with cheaper labour, or relies on the state to help break the resolve of the workers and starve them back to work as happened in the miners’ strike of 1984-5, and the printers’ dispute of 1986.

The unions have been largely ignored by governments, both Tory and Labour, for the last 40 years because they have been seen to lack teeth or power.  They remained divided, one union from another. And where they have remained powerful as in the rail industry, they have been left alone, more or less unchallenged. The unions as a whole have been quite unable to stop the wholesale destruction of jobs and closure of workplaces, or indeed to have much influence on the creation of hundreds of thousands of new low-paid, mostly non-union jobs.

This is the failure of not just the union leaders, but the Labour Party too. Under Neil Kinnock and then Tony Blair, the party fell in with the ideas of neoliberal capitalism. It lost sight of its main purpose — to represent the interests of the 99%. It competed with the Tories to become the best facilitators of globalisation, dumping in the process most of the policies and traditions of the party. The Labour governments of Blair and Gordon Brown didn’t even legislate to remove the crippling anti-union laws enacted by the previous Tory governments.

But that was yesterday.  Neoliberalism, with its acceptance of market solutions for every sphere of human activity, has lost its sheen. Powerful social movements have begun to emerge to challenge it, and to throw the ruling classes into disarray. The large vote in Scotland for independence was a vote against the political classes in London. The Brexit vote was also, primarily, the expression of frustration and despair against the establishment by millions of people who had lost their jobs and livelihoods.

And the drift towards corporatism in the Labour Party was suddenly challenged by the influx of half a million new members and the election of a complete outsider, a socialist, to the leadership.  This disintegration of the old order can be seen throughout Europe and America, taking different forms in each country.

This change provides an opportunity for the unions to recruit and re-establish some of their former power. They will have to change and adapt, take themselves out of the old formal trade union straitjacket, and try to put themselves at the head of a movement for people’s rights, for real democracy, for local communities. It is the unions, after all, that have always stood for democratic values, for the rights of ordinary people to an education, a decent job, a house, health care and so on. The rights and freedoms that we take for granted (although they are being rapidly eroded) are all buttressed by the trade unions.

There is nothing the Tories would like better than to rule over a broken atomised society, where the collective strength of organised workers has been broken. This kind of society is a real possibility in this period because the global economic crisis is forcing governments, corporations and employers to cut costs constantly in order to remain competitive and solvent. In the absence of trade unions that can adapt and organise the new workforce, this nightmare kind of authoritarian society could become a reality. 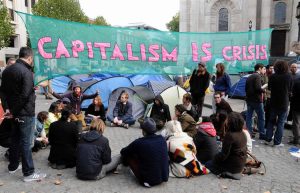 There is no shortage of anger and frustration at large in the country. There have recently been disputes and even strikes at the most unexpected workplaces — McDonalds,  the Ritzy Cinema chain, Uber, Deliveroo, and other chains of couriers; and tenants in Bristol have even set up a union of renters who campaign for decent rented housing and are prepared to name and shame slum landlords. They turned out en masse to prevent a bailiff appointed by the courts from evicting a mother and her children for getting behind on her rent payments. Branches of this new union, called Acorn, have already spread to several cities including Sheffield and Brighton.

The unions have to embrace and assist this new emerging social movement, they have to forge common programmes with the youth, with the low paid and the unemployed and rebuild their power from the bottom up. Above all, they have to show that they can win again and are up for the struggle. Otherwise they will continue to lose more members and influence, leaving the field open for others — including extreme right-wingers — to take over.

In the 1970s the real power of the unions was expressed through the unofficial leaderships in the factories. Shop stewards and convenors, democratically elected by the work-force on site, called the shots with the employers.  Any problems or issues to be resolved were referred by the shop stewards’ committee to mass meetings for decision. It was this kind of power, rather than the union officials, that struck fear and doubt into the minds of the employers and governments.

With most of the factories gone, this kind of organising is now rare enough, but by targeting new sections of working people and showing them the value of a trade union, some of the old spirit of the 1970s — the decade in which two governments were brought down by the power of the unions — could be resurrected.

O’Grady talks about new tactics for the unions, a new sense of direction to meet the changed world of work, of stronger organisation and of more resolve. What is left hanging in the air, however, is the necessity of developing  a new role and purpose for the unions in the changed political landscape. Of course they have to continue to defend wages and conditions for their members, new and old. But today it is arguably not possible to do this without a much more distinct and committed political perspective.

Historically, the great weakness of the trade union movement in Britain has been its political naivety. The leadership of the unions, in spite of its huge potential power, has always shied away from challenging governments and the state. It prefers compromise.

On at least two occasions in the last 100 years, in the general strike of 1926 and then again in the miners strike in 1984-5, the unions were in a position to bring down the government of the day and become a force, the main force, for setting up a new social order. On both occasions of course, they didn’t follow through. In fact, they betrayed those strikes and the strength of the movement was dissipated for years afterwards.

The TUC today has to learn from their history. It is not enough to leave politics to the Labour Party or to any others. The Tories would gladly destroy the trade unions, without scruples. So the trade unions, in this age, cannot but have a perspective of imagining a new kind of co-operative society and of being a part of a movement for taking the power to set up this new society. Anything less, in this period of history, will allow the 1% to deepen their exploitation of the majority and consign trade unions to history in the process.