The UK’s ‘economic model’: what it is and how to change it 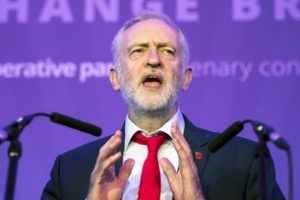 With the Tories in increasing disarray and Labour leading in the polls, Jeremy Corbyn hammered home his party’s advantage at the Cooperative Party’s 100th anniversary conference.

“Yes we do,” he responded emphatically, adding: “I am not going to sit back when their economic model is seeing: homelessness double; four million children in poverty; over a million older people not getting the care they need.”

And with justifiable amusement Corbyn noted the International Monetary Fund’s unprecedented agreement with shadow chancellor John McDonnell that “inequality and low taxes for the richest are harming the economy”. Corbyn took the opportunity to call for workers’ control of robots in the workplace.

But what expectations are being built up, and what are Corbyn’s team preparing for? What is the Tory economic model, and what is Labour’s alternative? How will it fare in the context of a desperately fragile global capitalist economy drifting on a grotesquely distended, increasingly volatile balloon of unserviceable debt?

What prospects do the Labour leaders hold out for the steelworkers whose Indian employers Tata, having decimated pensions, are now merging with the German ThyssenKrupp and are already threatening once again to close Port Talbot? How would they, for example, deal with the plight of the Canadian-owned Bombardier aircraft workers in Northern Ireland caught in a tariff war between Trump’s US and Trudeau’s Canada – each protecting different corporate interests?

In his Cooperative Party speech, Corbyn referred to Alternative Models of Ownership, a document commissioned by McDonnell and shadow secretary of state for business and industrial strategy Rebecca Long-Bailey, delivered to them early in 2017, and published in advance of the election in May. According to its authors:

The economic system in Britain, in its current guise, has a number of fundamental structural flaws that undermine economic strength and societal well-being. The predominance of private property ownership has led to a lack of long-term investment and declining rates of productivity, undermined democracy, left regions of the country economically forgotten, and contributed to increasing levels inequality and financial insecurity. Alternative forms of ownership can fundamentally address these problems.

The alternatives they examined include: cooperative, municipal and locally-led, and national or state ownership – with measures to improve democratic accountability. The study, by a group of academics and councillors, looks backwards and sideways, but omits any real creative, let alone Utopian thinking. In more than 26,000 words, the document avoids the use of the term capitalism, which weakens the arguments considerably.

Nevertheless, alongside a string of promised reforms to the way the economy operates, some of Labour’s proposals are finding their way, tentatively, into conference speeches – much to the consternation of the capitalist commentariat.

Hammond and Theresa May have been forced to defend the alleged virtues of the free-market, capitalist economy, which shows how fragile the system is. Condemnation of the private sector and support for public ownership is now coming from unlikely circles, including the former city editor of The Times and Evening Standard!

Corbyn and McDonnell’s seemingly dramatic claim to introduce measures to double the size of the cooperative economy is welcome. But what does it amount to, really? Around 0.7% of jobs are in workers’ cooperatives. Doubling that to 1.4% with Corbyn’s dream of a cooperatively run Uber won’t make much of an impression on the 14% or 15% – seven million – in the touch-and-go, precarious, twilight world of the gig economy where incomes have dropped by as much as 50% in the last few years.

Taking the Royal Mail back into public ownership is obviously to be supported. But what do they propose to do about the myriad ranks of courier companies who’ve leapt into the privatised market, driving wages and conditions nto the ground for both their drivers and for Royal Mail workers? What should we do about major transnational corporations like Amazon, Facebook and Google who have our data and more under their ownership and control? The case for their public ownership has already been set out.

The challenges ahead for a Corbyn-led government don’t stop there. In his conference speech last month, McDonnell warned that “our financial services” must “understand that 2008 must never happen again. We will not tolerate a return to the casino economy that contributed to that crash”.

The question is: how do you exert any influence let alone control over a globalised industry of transnational banks and finance houses, hedge funds, investment funds, lobby firms and groups? These privately-owned, profit-driven sectors are beyond nation-state control, operating as they do across borders. The discredited financial instruments like credit default swaps that lay behind the 2008 crash have, by all accounts, been replaced by just-as-deadly exotic arrangements.

Cooperative ownership and control of the financial sector will inevitably be posed if Labour is serious about changing the shape – if not the nature – of what Corbyn told the Cooperative conference was “a more rapacious and exploitative form of capitalism”.

On Saturday, October 28, supporters of the Real Democracy Movement are holding a planning day to discuss the challenges that a Corbyn-led government would face as well as the state attacks that would undoubtedly be mounted against it by a system in deep crisis. If you’re interested in coming, email info@realdemocracymovement.org with “October 28” in the subject line and we’ll get back to you.