What if there’s a revolt from within 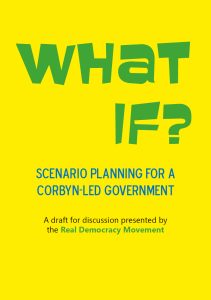 As things stand at present, a Jeremy Corbyn-led government would be threatened from within the Parliamentary Labour Party. While the bulk of the party’s membership and most of the trade union affiliates have rallied to Corbyn, a large section in the PLP have not reconciled themselves to his leadership – and never will. They are joined by a substantial majority of local councillors, who still have tremendous and disproportionate influence at local constituency level. They have implemented the Blairite and then the Tory austerity agenda of neoliberal privatisation, outsourcing, working hand-in-glove with developers and generally running local authority services into the ground.

The Blairite and right-wing group in the PLP owe their loyalty to the state and capitalism first and the party a long way second. Always considering themselves the highest body in the party, the PLP has been shaken to its historic roots by the huge surge in membership who joined to support Corbyn as well as the rise of grassroots campaign Momentum. Many in the PLP fear that a membership-driven party will undermine their historic power within the party’s constitution and are prepared to strike back with a vengeance.

They made this clear during the Russian poisoning crisis. When Corbyn was not prepared to give the Tories a blank cheque, several MPs – including those in the shadow cabinet – lent their support to the May government without reservation. This was a clear indication, in our view, that many in the PLP would do anything necessary to prevent Corbyn coming to power and, if that failed, to weaken his government.

Those plotters against Corbyn are well known. They need to be smoked out well before the election and replaced. The Corbyn leadership has shied away from a mandatory reselection of MPs but now that it has control of the National Executive Committee, rule changes can and should be introduced before the next general election (which could happen sooner rather than later) is upon us. Leaving the plotters in place heightens the risk of them bringing down a Corbyn-led government.

Under present rules, before alternate candidates can be considered, members have to defeat their current MP. However, a sitting MP is automatically reselected if they win the support of two-thirds of branches affiliated to their constituency Labour party. Affiliates have equal weight, whether they are a ward with a thousand members or a union branch with three. Defeating them at this point requires a major struggle with no guarantee of success, even if the majority of members want a change.

Mandatory reselection, perhaps with open primaries, would reflect the changes that have taken place since Corbyn won the leadership. The old structure of the Labour Party, created after World War One, is effectively dead. Corbyn needs to reconstruct the party and do it with MPs who are onside.

Corbyn should also back a change to the constitution that allows constituents to recall their MPs if they’re unhappy with their performance. This can be triggered by a petition with a defined threshold. Once passed, the MP would have to face a new election.

Usually, a party manifesto is only released in the course of a general election campaign. In the struggle against Corbyn’s opponents in the PLP there is a strong case for getting on with it now. MPs should then be asked to endorse it. Those who decline would be exposed and set themselves up for eviction. Outside of those considerations, the Corbyn leadership should seize the opportunity to be much bolder.

The party’s education policy, to take one area, is something of a generalisation, much to the frustration of the teachers’ unions. A real statement that sets out proposals on how the almost 6,000 academies can be reintegrated into accountable control to establish a new comprehensive system would, for example, would galvanise support.  Labour’s membership and the teaching unions could be drawn into a process that replaces the meaningless policy forums that meander on for years without coming to any serious conclusions.