‘What would those at the time of Peterloo think of where we are now?’

It’s taken 200 years but Manchester is finally going to get a proper memorial to mark the Peterloo Massacre of 1819. Conceptual installation artist Jeremy Deller’s design has just won the approval of the council’s planning committee after a degree of haggling.

With the August bicentenary of the massacre, fast approaching, Deller’s work will be installed outside the city’s convention centre near to the site of the unprovoked attack on a crowd of 60,000 gathered peacefully in St Peter’s Field.

Deller’s £1 million memorial will include the names of the 18 people who were killed when magistrates ordered local militia to charge the crowd with sabres drawn. Another 700 were injured, a quarter of them women, by the time the area had been cleared.

The artist himself, a Turner prize winner, is no stranger to depicting confrontations between struggling workers and the state. In 2001, he made a recreation at Tate Britain of the Battle of Orgreave in 1984 when miners fighting for jobs were met by mounted police charges.

At present, all there is to show that an historic moment in the struggle for the vote and democracy took place in Manchester is a tiny plaque on the wall outside what was the Free Trade Hall and is now a 5 star hotel! And that was only put up in 2007.

Deller has succeeded where others have failed. In 1870, just after the Reform Act that gave some working-class men the vote for the first time, the city fathers (no women were on the council), commissioned Ford Madox Brown, the pre-Raphaelite artist, to design some murals marking Peterloo. They were to adorn the corridors of the town hall. But his proposals were considered “too controversial”.

Monday on August 16, 1819 was a sunny day and the famous radical orator Henry Hunt was due to speak in favour of the right to representation. An estimated half of Manchester’s population gathered, along with thousands of weavers, some of whom had marched up to 30 miles from nearby cotton towns. Those who worked in the new textile factories had gone on strike in defiance of notorious anti-union Combination Acts in order to be there

Manchester at that time had no MP while tiny villages had two. Indeed, only about 2% of the country’s entire population had the vote and seats in Parliament owed little to popular backing and much to the power, corruption and money of the gentry in the countryside.

After almost 20 years of war with revolutionary France, the emerging industrial working class driven into cites and into toiling for others, was suffering falling wages and rising prices for food because of laws which kept the price of corn artificially high.

Resistance was well established in the North West. In 1808, Manchester weavers took action against the price of food and clashed with the army. In 1817,  weavers set out on a march from Manchester to London to bring their plight to the attention of the monarchy and to protest against the suspension of habeas corpus, which meant anyone could be held without trial. Carrying only a blanket for warmth, they were brutally repressed and never made it to the capital.

Against this background of social and economic hardship, representation at Westminster, which until then had been a campaign led by the radical middle-classes, began to draw support from workers. This combination terrified the ruling elites. A reactionary Tory government (not much change there!) led by the Earl of Liverpool lived in fear of a mass uprising and what an extension of the franchise would lead to.

When news of the planned gathering in Manchester reached the authorities they were determined to crush it. Power outside London resided with the local magistrates. They put together a yeomanry of local businessmen, fired them up with drink and sent them into action against the meeting.

The splendid People’s History Museum in Manchester – also known as the national museum for democracy – has launched an exhibition marking the 200th anniversary of Peterloo, a combination of the name of the location of the assault and the battle of Waterloo to signify the bloody nature of what took place.

Disrupt? Peterloo and Protest takes visitors through the story through original artefacts.  Newly acquired pieces, donations and loan items are brought together for the first time, some never having been on public display before. A cartoon by George Cruikshank, Universal Suffrage or the Scum Uppermost from July 1819 highlights the government’s fear of the masses.

The scene that unfolded as the local yeomanry drew their sabres is shown in a beautiful commemorative glass painting whilst an oil portrait introduces mill owner Hugh Hornby Birley, who as captain of the Manchester and Salford Yeomanry led the assault. 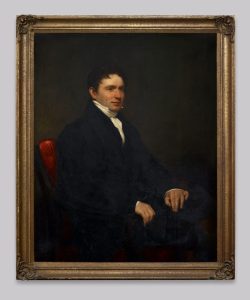 Mill owner Hugh Hornby Birley, who as captain of the Manchester and Salford Yeomanry led the assault

Birley was eventually brought to trial, with three others. Despite shocking witness statements, they were all acquitted. Their violent actions, it was held, were justified in dispersing an illegal gathering. Birley’s legal costs were covered by the government, and his career would continue to flourish. Eventually he became a magistrate and the Deputy Lieutenant for Lancashire.

The portrait was made some time after the massacre and was donated to the museum by great great great grandson Dr Rick Birley, who acknowledged: “Through this portrait and my connection to it I have come to understand much about class divisions, inequality, the processes of change, the power of the state and the politics of revolution.”

In the weeks and months that followed the attack, commemorative pieces were made to mark what had taken place, two of which are included in the exhibition.  The Skelmanthorpe flag spent much of its early life being hidden from the authorities because of the reform messages that it held. A commemorative medal is also on display.

The connection of Peterloo to today, and current activism and campaigning, is told through a film specially commissioned for the exhibition in which a range of contemporary and familiar voices share personal perspectives.

Other campaigns, most notably the Chartist movement, took up the struggle for the vote in the 1830s. But it took until 1867 for some working-class men to get the vote and it was a 100 years after Peterloo before women over 30 were enfranchised.

But where are we today in terms of the vote, representation and power? Mike Leigh, director of the recent film Peterloo, said when he opened the exhibition: “What would those at the time of Peterloo think of where we are now?”

It’s a question we are obliged to try and answer.

A recent and extensive survey found that 55% thought the UK’s political system was broken while a massive 75% rejected the thought that “politicians generally work to represent the views and interests of people like me above big businesses”.

Clearly, many think that the vote – for which countless people sacrificed their lives in Manchester and elsewhere – by itself leads to precious little change or improvement in their lives in the contemporary system.

The museum, acknowledging that the struggle for democracy is a continuous one, has created a “Protest Lab” in the room next to the exhibition. Here individuals or groups can develop their ideas for collective action on contemporary live issues. As the UK’s constitutional, state and political crisis spirals out of control, get down to the exhibition and have your say!