From stone tablets to emojis

12th May 2019Written by Corinna Lotz
Leave a comment 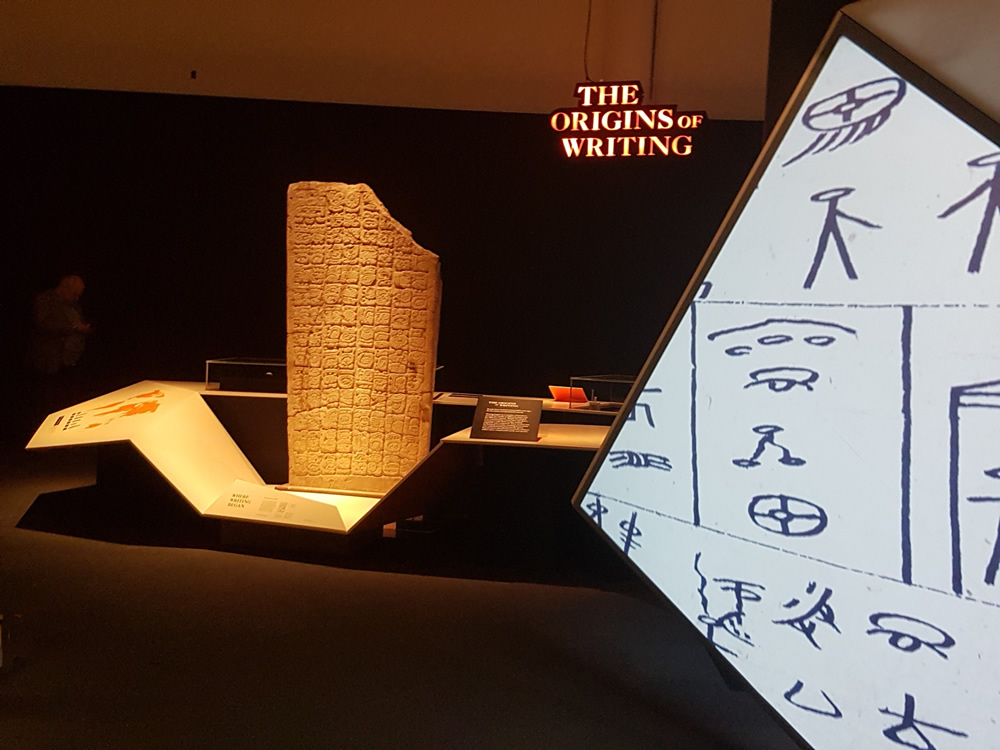 Entrance to Writing – Making Your Mark at the British Museum

It’s been calculated that globally we will be exchanging over 293 billion emails each day by the end of 2019.  And that’s not counting WhatsApp, Tweets and Facebook messages. So how did we get here?

Making your Mark, an elegant show at the British Library, traces the evolution of writing over the last 5,000 years. It’s no exaggeration to say that from its very beginnings writing revolutionised society. The consequences are all around us in a myriad of ways.

It’s so deeply embedded in our everyday life that we take writing for granted. And yet, it took hundreds of thousands of years for human beings to progress from making bows and arrows and painting cave walls to creating the first inscriptions.

It took a leap of the imagination and technique to progress from oral speech to noting down information and ideas on durable, exchangeable materials.

Writing became possible through the use of a symbolic forms whose meaning is shared socially.  It required, as language theory pioneer Lev Vygotsky explained, a high degree of abstraction. The capacity to write is only acquired through deeply conscious mental work.

Writing allows human beings to defy the limits of time and space.  It gives an individual the ability to reach out to her fellow human beings by creating a separate “third”, or “other”,  which embodies a shared universal understanding, beyond the individual.

Making your Mark is staged as a form of time travel beginning with the most ancient forms of writing.   Around 5,000 years ago human beings began to set down characters representing language into clay, stone, bone and tortoise shell.

A dramatic limestone stone from Belize from 647 AD rises high at the entrance (see photo above). It records the feats of a Mayan ruler through symbols.

This was already relatively late. Two and a half millennia earlier people in the fertile crescent of Mesopotamia – today’s Iraq, Kuwait and parts of Syria and Turkey – had already invented cuneiform. The clay tablets were forerunners of today’s tablets! Easily portable and no doubt cheaper as you could just pick up some clay and inscribe it with a reed.

This technology – only made more lasting by fire – was used not only to record the priestly and royal wealth, but also the world’s first written work of literature – the poetic epic of Gilgamesh. Of course you had to learn the wedge-shaped marks. These were made by scribes in the ancient Sumerian civilisation in Mesopotamia.  But it seems that children today take to cuneiform like fish to water. 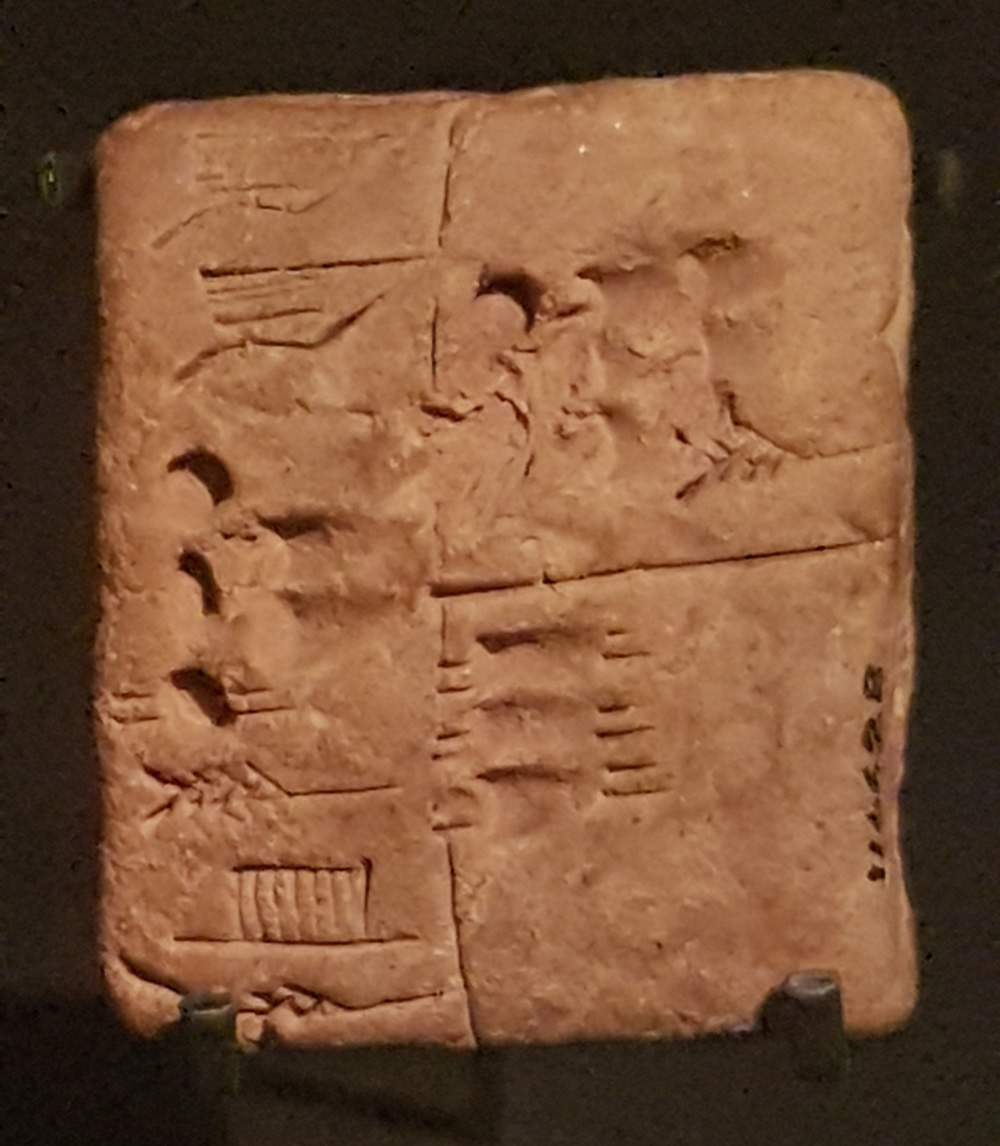 A 5,000-year-old clay tablet from southern Iraq records barley portions distributed as wages to farm labourers. The marks made into the soft clay look astonishingly fresh and malleable.

Many substrates and instruments have been used for writing as this exhibition reveals.  Amongst these was ink on shards of pottery – Illustrated by a piece of broken dish from 1,900 years ago. Its inscription authorises Thinabdella to work for a single day as a sex worker on the island of Elphantine, near Aswan in Upper Egypt.

The objects in this show reveal that no country or culture has a monopoly on the invention of writing. China, Japan, Mesoamerica (the area from Mexico to Costa Rica), Oceania, the Mediterranean basin, Egypt, the Arabic speaking countries, Indus valley, to name only a few, all developed their own systems. The jury is still out amongst researchers if writing arose completely independently in these areas or if the concept spread from one or two places. 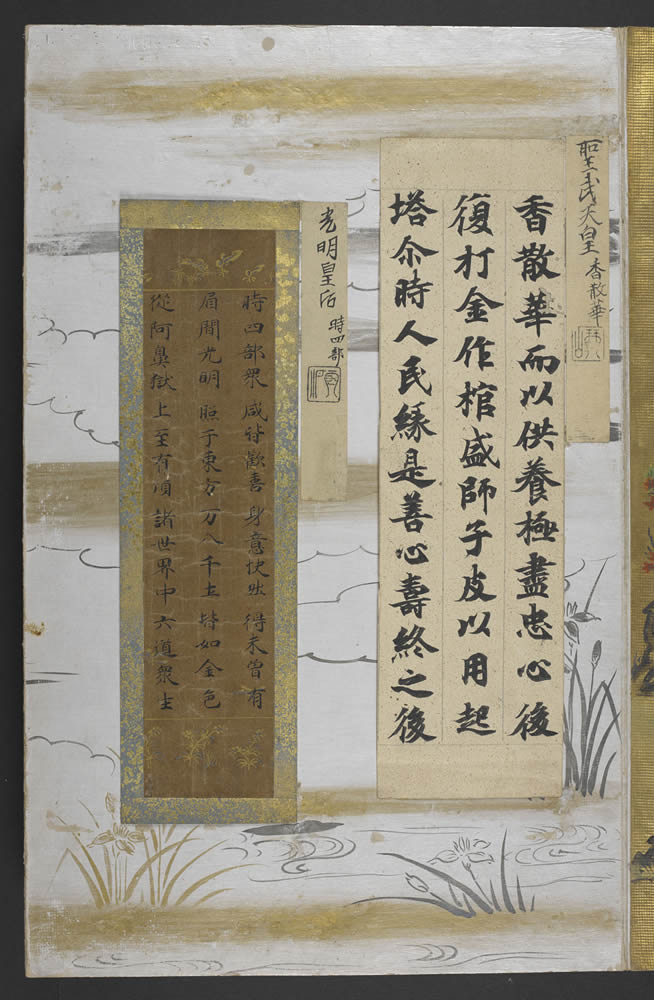 Euro-centrism flies out the window. Writing systems from every corner of the world (40 of them) reveal a wonderful variety of forms. It places our own “Roman” alphabet into a global context in a deeply humbling way.

There is also a primer, for example,  in Devanagari which is the writing system used for Hindi, Sanskrit, Marathi, Nepali and other North Indian languages.

A glyph (elemental symbol within an agreed set of symbols) inscribed on a wooden tablet (that word again) from Rapa Nui (Easter Island) remains untranslatable.

We often think that Johannes Gutenberg in Germany was the first to invent printing and moveable type. Think again.  The world’s oldest complete printed book, the Diamond Sutra dating from 11 May 868AD, comes from Dunhuang, China.  Metal type was invented in Korea around 1440, some ten years before Gutenberg. From moveable type to the typewriter seems a logical step but it took some 450 years until the Remington typewriter came into mass production.

But inventing the Remington for a 26-letter alphabet was a mere doddle.  Spare a thought for the creators of The Double Pigeon Typewriter (what a great name!). Made in Maoist China after the 1949 revolution, it has a tray bed containing some 2,450 pieces of type to accommodate the thousands of written Chinese characters.

The logic of technological invention meant that from an elite profession confined to a tiny proportion of society, through the invention of simpler and cheaper systems, literacy could spread to the majority of populations around the globe. Literacy has risen from negligible levels in the 15th century to between 80-99% in most countries today, as  graphs produced by Our World in Data reveal. 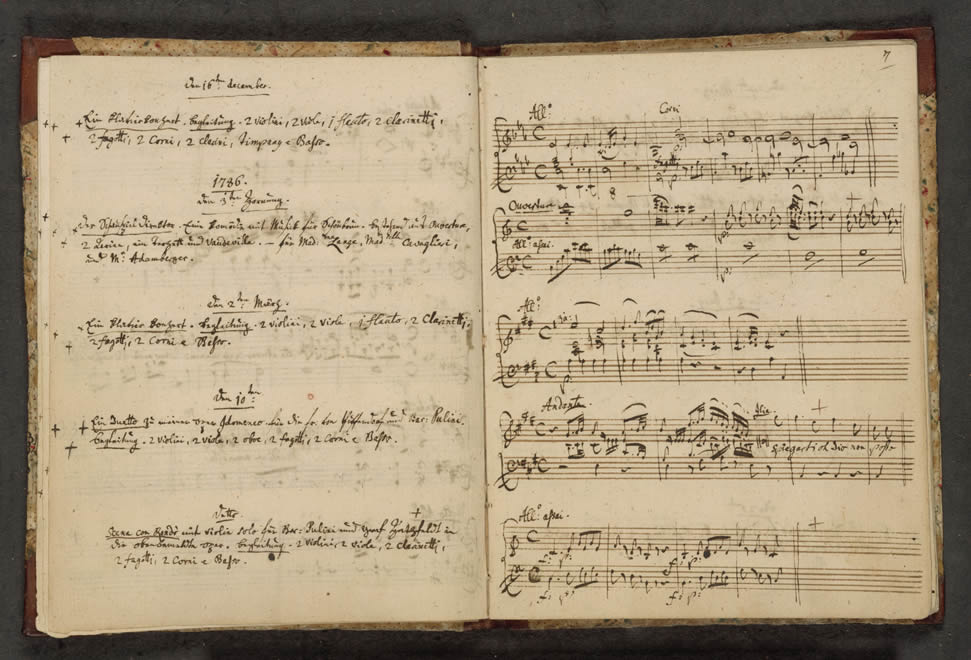 Amongst the astonishing and sometimes moving exhibits is  Mozart’s compendium of his compositions between 1784 to 1791, completed only three weeks before his death. A stone inscription of words by Jeanette Winterson, Whisper to my soul – it’s only temporary, reminds us that poets over the millennia have used writing to defy the ravages of death and time.

Writing: Making your Mark is at the British Library until 27 August.

Exhibition information with a 31 second video