In Tory Britain, the only certainty is uncertainty itself 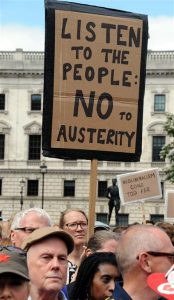 Tories are not listening

The break-up of the Tory government is more than just a crisis of a party that lost its majority, with many preferring a genuinely warm person like Jeremy Corbyn instead of a robotic prime minister.

Corbyn promised an end to austerity and change to benefit the many, while Theresa May promised more pain allied to “strong and stable leadership”.

Today, what looks like an all-embracing crisis of confidence of the establishment and the capacity of the state itself to deal with the main issue of the day – Brexit – is gripping the UK.

Some, like myself, thought that a vote to leave the European Union would lead to just the turmoil we are witnessing right now. What happens next can’t be predicted because this is a period characterised by uncertainty.

The unexpected just as quickly becomes the expected. Six months ago, the idea of a Corbyn-led government was discounted by the media and the Tory Party.

Today it is the new norm of expectations (which means we ought to be prepared for some more strange twists and turns!).

The vote for Brexit contained many aspects, not all of which are that pretty. But it is acknowledged that the majority voted against an EU that had done little for their prospects and was a champion of neo-liberalism, aka corporate-driven capitalism.

Big business that has investment in the UK as well as the financial institutions hate Brexit because it throws their plans into disarray. The uncertainty factor rules.

But the Tory Party, which would normally align themselves with corporate interests, is committed to implementing the result of the referendum.

Yet, not surprisingly, the government cannot agree among themselves what kind of Brexit it should aim for. I say aim for because the EU is playing a different game with its own distinct rules to discourage others from leaving.

Ultimately, this is a profound constitutional crisis made more difficult by the fact the UK is a country where how the state is supposed to rule is not set out in a single document but can only be found in scattered pieces of legislation, judicial decisions, conventions and traditions.

Within government, the once settled relationship between Parliament and the executive is under stress with talk of MPs having a veto on any deal with the EU.

The relationships between Westminister and the devolved Parliaments of Wales, Scotland and Northern Ireland are buckling under the strain of Brexit.

Overriding all these issues is the fact that for the last 40 odd years, UK laws have been subordinate to EU laws without question, leaving Westminster a bit of a damp squib when it comes to its own fabled sovereignty.

None of this is going away, whether the Tory government remains in office or is replaced sooner rather than later by a Corbyn-led government.

Labour is just as divided on Brexit as the Tories which perhaps explain why it doesn’t seem so keen to push the Tories out while negotiations continue.

What is coming to head is an all-consuming crisis of the political system and its intimate connections with corporate and financial interests.

There are, naturally, forces within the state and the right-wing, who smell authoritarian rule as the way forward which is why they have turned a blind eye to the arrest of Catalan’s political leaders for organising a ballot on self-determination.

What is before us is a crisis of representative democracy itself, one for which Corbyn ought to be prepared for if he wants to survive in office. Our political system has its roots in the late 17th century. The right to vote has not shifted essential power structures.

A democratic revolution which gives genuine power to people in their communities, towns and workplaces is what we should campaign for right now.