A democratic revolution is the way to oust Johnson regime 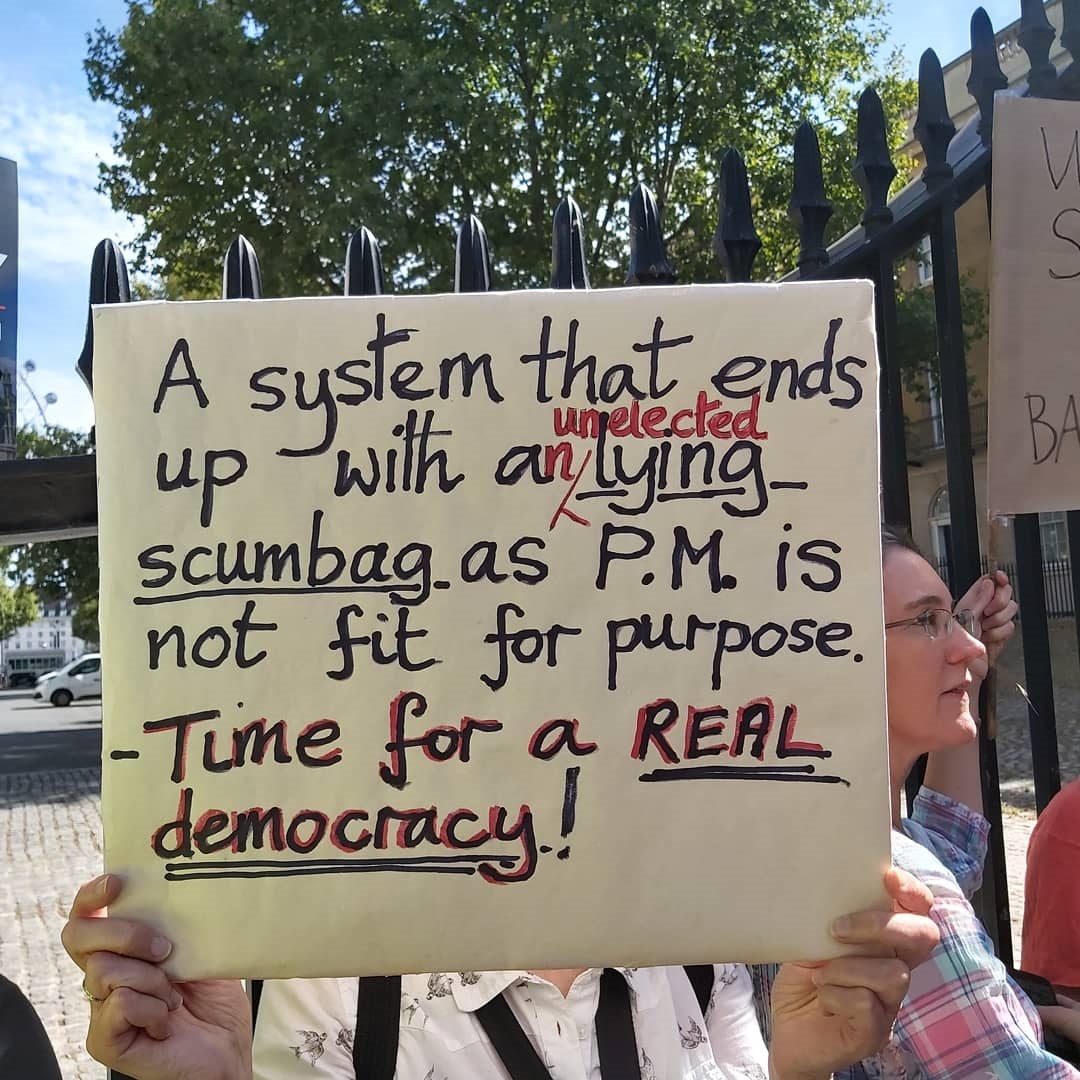 We are, as historian Simon Schama told BBC’s Newsnight, “living in a weird British revolutionary moment”. Different parts of the political system are at war with each other. The old constitutional arrangements have broken down and the crisis of representative democracy is a turning point in UK history.

MPs have responded to Boris Johnson’s coup against Parliament by passing legislation of their own aimed at thwarting a no-deal Brexit. Johnson says he may ignore the legislation. Judges are ruling about the legality of suspending Parliament and senior civil servants are leaking secret documents showing that a no-deal Brexit is simply a leap into the unknown. Meanwhile, Johnson’s own brother and then Amber Rudd have quit the government against the purge of Tory MPs.

The old order – founded as a consequence of revolution in the 17th century – whereby the government or executive exercises the power of the former absolute monarchy and tells Parliament what to do, has clearly lost its authority and legitimacy. Polls show that the majority of people believe the system doesn’t work for them.

As capitalism developed in the 18th and 19th centuries, the top-down parliamentary state was ideal. When the right to vote was conceded, it helped tie the mass of the population into supporting a political framework that claimed to represent the country as a whole.

But in the period of corporate-driven globalisation, where a handful of giant companies and investment banks operate across borders and drive the political agenda, the system only works for the few. Runaway climate change, species extinction, the decline in essential public services and growing inequality only reinforces a sense of powerlessness in the minds of many people.

Ahead of its annual conference next week, the TUC reports that there are 3.7 million people in insecure work and 1.85 million self-employed people earning less than the minimum wage.  Workers are still facing the longest pay squeeze for 200 years.

The share of economic output going to wages has declined from an average of 57% in the three decades after the second world war to 49% in 2018. TUC general secretary Frances O’Grady said:

“We’re at risk of going back to 19th-century working conditions. Millions of workers have no control and no voice at work, with increasing numbers stuck on low pay, zero-hours contracts, and in sham self-employment.”

The 2016 vote to leave the European Union reflected these change. Many leave voters had nothing to lose so they defied the political establishment – Labour and Tory – who said they should vote for the EU.

Now comes the break-up of the neoliberal world order established in the 1990s. The global capitalist economy has not recovered from the crash of 2008, despite billions being poured into the system by central banks, and ten long years of austerity. Trade wars are escalating amid signs of an emerging global recession.

In country after country, representative systems are under tremendous pressure or in a state of collapse.The removal of Theresa May ended the attempt to hold the centre together in the UK. Johnson has led a right-wing coup not just against Parliament but the heart of Tory Party too. No fewer than eight former cabinet members have been barred from standing as Tory MPs. 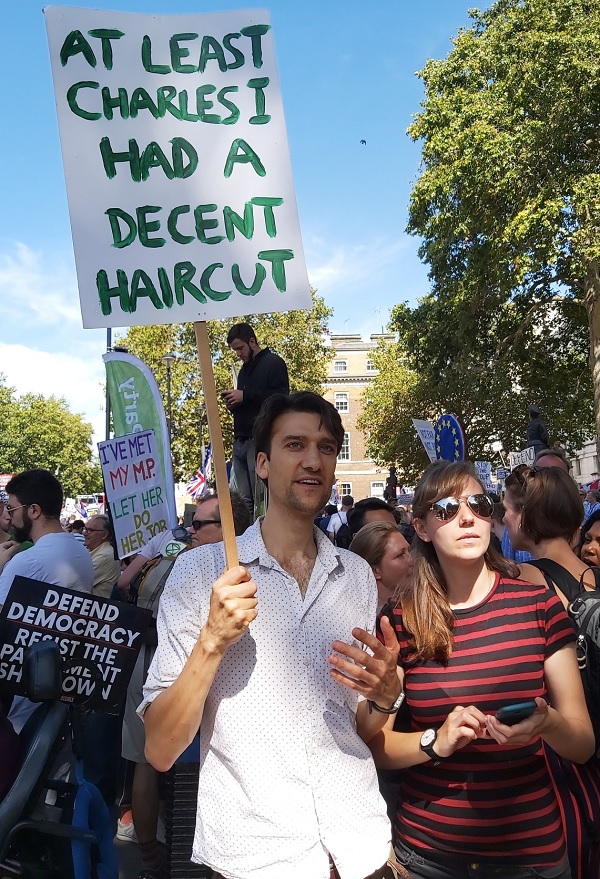 Johnson’s transitional regime is led by neoliberal fantasists and fanatics like Dominic Cummings, who is not even a member of the Tory Party. They want to “Make Britain Great Again”, drawing on Trump’s arbitrary and authoritarian rule. Johnson’s social base is not the corporations nor the City, nor even the farming community.

They are all opposed to a no-deal Brexit. As Deustche Bank’s Oliver Harvey told the Daily Telegraph: “We see the magnitude of economic damage caused by a no deal Brexit as much higher than policies proposed in the last Labour manifesto.”

Johnson instead sits between reactionary sections of the middle-class and some sections of the apolitical working class impoverished by neoliberalism. These are the social forces populism bases itself on. Its trajectory is to wipe out democratic processes and to rule by decree, by force if necessary. Talk of “surrender” and “collaboration” is drawing the ultra-right on to the streets.

How can we defeat this regime and what it represents? A general election is an important starting point but we have to look and plan further ahead. In any case, no one can be certain about the outcome of a general election. A feature of the present period is the weakening of old party ties that were passed on from generation to generation.

While Parliament is the closest thing to democracy that we have and must be defended,  it is not a panacea. It has never been truly sovereign in any case. The UK’s uncodified constitution does not serve the people and is open to manipulation as Johnson has shown. Ultimately it is a constitution that upholds the power of money and corporate ownership.

That’s what we should set out to change. There are real indications that new generations have had enough of this set-up. A huge survey of millennials and Gen Z recognises, for example, that the capitalist system is the root cause of the ecological crisis.

Only half of respondents believe leaders of their current governments are committed to helping improve society or behave in an ethical manner. Forty-five per cent say they have absolutely no trust in political leaders. 70% say leaders focus on their own agendas rather than constituents’ interests and 63% say leaders have no ambition beyond retaining or increasing their power.

This survey shows that thanks to their transformed social existence the new generation is shaping its own social consciousness. It is a world away from that of the older generation, and most particularly of government, business and educators.   This represents a breach in neoliberal hegemony through which change can pour.

Stopping a catastrophic no-deal Brexit is important. But an extension of the 31 October deadline – which the EU and the UK government must agree to – in itself doesn’t answer the question about what to do about Brexit and in particular fails to address the reasons why 17.4 million people voted for it.

So alongside fighting to remove the Johnson junta we should campaign for a new, truly democratic constitution that transfers power to the people. Green MP Caroline Lucas was absolutely right to say this in Parliament:

“We now need more than ever a written constitution drawn up by a democratic citizens’ convention that will put people at the heart of our politics for the first time in UK history.”

Campaigns like Unlock Democracy have launched a call for this process to begin now. The Six Acts campaign is inviting proposals to achieve greater democracy, including the creation of a network of powerful citizens’ assemblies.

Labour’s 2017 Manifesto said it would set up a convention which would address “where power and sovereignty lies – in politics, the economy, the justice system, and in our communities” and pledged that the convention would “look at extending democracy locally, regionally and nationally, considering the option of a more federalised country”.

Labour’s leaders need to take the initiative now with a pledge to hold a convention to remake democracy. They should make this a central feature of any forthcoming election because the crisis of democracy is too deep to be relegated to the back of the manifesto.

Defeating Johnson’s junta will require a bold plan that outlines the path to a democratic revolution in the UK. Nothing less will do. Over to you John and Jeremy.