Catalan political leaders and activists remain locked up in jail in Madrid, awaiting trial on sedition, rebellion and misuse of funds. 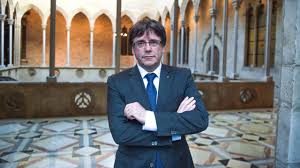 Carles Puigdemont, the president of Catalonia, is in Belgium fighting extradition. Catalonia’s Parliament remains closed and the region’s ministries and police are under the control of officials despatched by Madrid.

This is the reaction to the October 1 referendum held in defiance of the Spanish state  and the constitutional court which declared the vote illegal. On the day itself, riot police savagely attacked voters throughout the region. 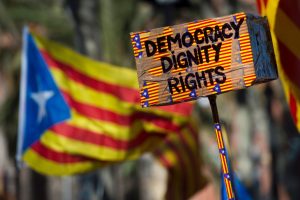 A demonstration for Catalan independence

Subsequently, the region’s Parliament voted in principle for independence. The right-wing government of Mariano Rajoy took this as the signal to impose authoritarian rule. In this they were supported by the Spanish Socialist Party and the Communist Party.

Podemos, who emerged as a new anti-austerity force in Spain, condemned the attacks on voters but opposed moves towards Catalan independence as did Ada Colau, the mayor of Barcelona who came to prominence in the fight against evictions.

New elections scheduled for December 21 are hardly likely to lead to a compromise if past experience is anything to go by.

The Statute of Autonomy, which the Catalan parliament passed in 2005, was blocked and the constitutional court declared 14 articles illegal. This failed process convinced many Catalans that they could not reform Spain from within.

So a social, economic and constitutional crisis at the heart of Europe that puts Brexit in the shade has to find another way forward. In my view, we should support not just the right to self-determination but the independence of Catalonia itself. Achieving this would be a blow against the centralising Spanish state and for democracy everywhere.

The first thing to say is that politicians and others who are wedded to “legality”, should recall that the original Spanish republican constitution, illegally overthrown by Franco’s fascist regime, gave Catalonia the status of a state within a confederation.

Popular support for this level of independence from bourgeois rule in reactionary Catholic Spain put Catalans at the forefront of the battle to sustain the legal constitution and the democratically-elected government of the new Spanish republic.

Franco more or less left Spain to the Bourbon King Juan Carlos in his will – seizing the right to decide Spain’s future even after he was dead. A constitution drawn up by ex-Franco ministers and the monarchy was imposed in 1977. Not surprisingly the present monarch intervened directly to condemn Catalonia’s referendum. 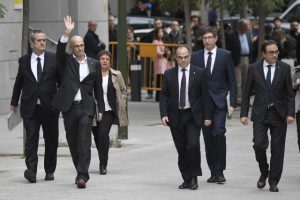 Catalan leaders on their way to court – and jail – in Madrid

You can’t have real democracy unless you change the constitution and the relationship between people and the state. To rely on existing constitutions is to support the status quo. Our social history is full of inspiring examples of defiance of and opposition to so-called legality, including the Chartists and the Suffragettes

So when Pancho Sanchez, leader of the Spanish Socialist Party and the Communist Party and leaders of the formerly radical Podemos, align themselves with Rajoy they value a reactionary constitution over the desires, needs, aspirations and votes of the people of Catalonia.

One major factor behind the drive for independence is frustration with the actions of the Madrid government to block anti-austerity measures adopted by the Catalan Parliament, as Lluc Salellas, from the anti-capitalist CUP party, explains:

“The last fifteen laws we have passed in the Catalan parliament have been banned by the Spanish state. But these are not independentist laws — many of them are social laws: for example, a law about sanctuary for those fleeing persecution, a law banning energy companies from turning off people’s electricity, and a law for a higher minimum wage. We want to use our autonomy to improve people’s lives and we are forbidden. People see this and respond. They want to decide the future of Catalonia and that is not possible in the current arrangement.”

A desire for greater democratic control has also emerged out of the self-organising movements to, for example, defend people from eviction and to use control of local councils to support people in need in areas where austerity has bitten deep into jobs and services.

Anger at the levels of corruption at all levels of the Spanish state at a time of mass unemployment – especially among young people – has also increased support for independence among Catalans.

Anna Gabriel, the spokesperson for the CUP deputies in Parliament, writing on the eve of the October 1 referendum (follow the link to read the CUP booklet in English), said it had to “also act as a prelude to a constitutional process that will attend to the other crises”. These included, she added, “free market capitalism that allows ever-more wealth to accumulate among ever-fewer people, that involves miserable working conditions and misery for those whose only options lie between unemployment and exploitation”.

Putting the political stress on independence first as a condition for achieving social progress later is problematic, as the result of the referendum perhaps indicates.

On October 1, the independence camp secured over 90% of the vote. The turnout, however, was just 42%. While some of that can be put down to police repression, a consultative referendum in 2014 carried out in calm conditions produced a similar turnout and result. Many Catalans, especially workers who had moved to the area from other parts of Spain, clearly boycotted both referendums.

Their scepticism undoubtedly arises from concerns that independence in itself won’t guarantee jobs or a decent standard of living, or an end to evictions. Unless a road is found to their interests, in an appeal that can unite the region’s diverse communities and generations, a further referendum is likely to produce the same stalemate.

A programme that could appeal to them would address the question of power in a direct way. Independence under the terms proposed by the nationalist leaders who dominate the discourse would transfer control from Madrid to existing state institutions in Barcelona. Power over the economy would remain in the hands of the global corporations who operate in Catalonia and local capitalists, including landowners.

So scepticism about independence has to be answered in concrete terms that set out a transition beyond existing political institutions, beyond capitalist control of the economy, to a democracy that actually transfers power to the people away from the elites, either in Madrid of Barcelona.

This appeal can be developed not as a condition for supporting independence – which is a given – but as a way to unite communities, to find a common interest that goes beyond the political and economic power structures that presently have control over their lives.

Another advantage in this combined approach – of independence and social transformation as part of the same process – is that it would open a road to workers and anti-government forces outside Catalonia. Transcending nationalism with a programme for real democracy – in politics, in communities, in the workplace – could inspire the struggle against capitalism and authoritarian rule throughout Spain.

Citizens-led conventions on the constitution in Catalonia and elsewhere in Spain would accelerate the prospect of a new democratic revolution and finally lay the ghosts of Francoism.