Real Democracy as an ideal whose time has come

9th May 2017Written by Paul Feldman
Leave a comment 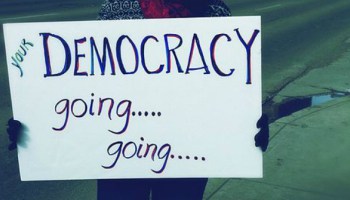 A critique of the system of representative democracy that has dominated the major capitalist economies and states over the last 150 years is not difficult to assemble. Much more of a challenge is coming forward with some outline proposals about where we go from here.

That’s what confronted a group of activists when we set out to write a short book on democracy that would stimulate debate and discussion about its content. Whether we succeeded you can judge for yourself by reading and commenting on Democracy Unchained. 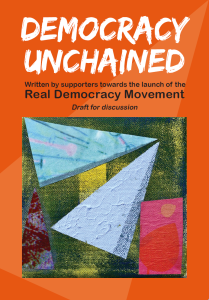 Written collaboratively, the introduction to the book insists: “Creating a vision for the future in a collective way and acting on our conviction is vital to counter the outright lie that no other future is possible.” The contents, ideas and proposals in the book are thus offered up for online discussion.

Our approach is holistic. We wanted to show democracy in its historical and social context, changing as circumstances alter, not an absolute but a practice that is altogether bound up with a long march for freedom. Our starting point is that democracy is an ideal rather than a completed phenomenon and that it embodies “the natural human aspiration for a society free from all kinds of oppression”.

This is demonstrated by the very history of democracy, from its origins in ancient Greece, in the consultative assemblies of early North European societies, the popular revolts of the medieval period, the great revolutions of the 17th and 18th centuries in England, America and France, through to enfranchisement, trade union, human rights and self-determination struggles of the 19th and 20th centuries.

An essential feature of our viewpoint is that the state – that is the ensemble of institutions that together rule over us (allegedly in our name) – and the practice of democracy live in a mutually-suspicious and unstable relationship. This  complex connection between the state and democracy is made early on, when we write: “The emergence of a defined, identifiable state with its claim to authority over all citizens would provoke a series of struggles for rights by those denied power … These struggles have continued through to the present day.”

In other words, the history of democracy is equivalent to or identical with the history of conflict with the state which, by implication, is not yet definitively settled. The question for all of us is, what point has this struggle reached? If “democracy” is just having a vote once every five years to decide who is to “represent” us, and if we can more or less speak and write freely, than, yes, we live in a democracy of a certain type.

But if real democracy is about the power of the majority, about a political system that works for and serves the interest of the 99%, then what we have is an ill-disguised fraud on the people. Surely the UK state, including the devolved parliaments, cannot be labelled truly democratic when key decisions that determine the way we live are taken in the boardrooms of giant corporations and hedge funds and where inequality grows apace?

real democracy should not exist just in a dictionary

Democracy Unchained examines in some detail how has it come to pass that the contemporary form of democracy is now so tarnished and, in the eyes of many, exhausted, hollowed out, illiberal, subsumed by the corporations and prey to populist revolts like the one that sent a billionaire property tycoon to the White House or produced a majority (in England and Wales anyway) for leaving the European Union. The dissolution of old loyalties in search of new solutions led to the SNP replacing Labour in Scotland and, paradoxically, the election of Jeremy Corbyn as the party’s leader. It has also seen the traditional parties of the left and right eliminated in the contest for the French presidency.

All this is put in the context of what the authors call “the rise of the corporatocracy” – the period of intense globalisation stretching back over the last 30 years and driven by the ideology of neo-liberalism. In this era, the UK and many other states made a transition from a welfare to a surveillance, market state where the business of the government was business itself. We argue:

“As inequality and alienation grew, so did political disaffection with a system that identifies itself with big business in an openly partisan way. The financial crash of 2008, and the speed at which the state used taxpayers’ money to prop up rotten, corrupt banks who had speculated with other people’s money and assets, sent shock waves through society. When the 2010 coalition imposed the most ruthless spending cuts in living memory, it was self-evident that while the banks were too big to fail, real, living people could be cut to the bone. The crisis of globalised corporate capital has led to political changes in which large numbers, even the majority realise that despite having the vote, they are effectively disenfranchised.”

Thus the crisis of democracy is a reflection of what has happened to people’s lives and the decline in any meaningful say or control in terms of employment, wages, housing, health, education, public transport, social care and other services, fracking plans or what happens in their communities.

We take a distinctly iconoclastic view about the way ahead. There are, as the authors see it, two main options 1. Try to make the existing system more democratic and responsive 2. Build what we term a real democracy with new, people-centred forms of governance that value and incorporate past achievements like the vote and human rights.

You won’t be surprised that we have opted for the hard road because, as it turns out, the first option is, in practice, not viable. Democracy Unchained investigates how the capitalist type of state like the UK’s is inherently inclined towards preserving and sustaining the status quo – whatever it takes. Similarly, business depends on the present state to provide a workforce that is subject to the wage-labour contract by which employers retain all profits. We conclude:

“Therefore a transition to real democracy is incompatible with a narrowly-based state that is predisposed towards capitalism. The present state cannot tame or control capital – even if it wanted to – because the economy operates through markets which are by their nature beyond state control … The impossibility of separating the present state from economic power is a powerful enough reason on its own for making a transition to new forms of democracy.”

People-led conventions that reflect the diversity of the UK and the different nations within it could be asked to work on a new, democratic, written constitution or constitutions that place power in the hands of the people themselves. Democracy of a real kind would extend to communities, to workplaces and schools, to control over natural and other resources. No more would corporate lobbyists be able to beat a path to the door of the first minister or the prime minister to ensure that their interests are prioritised.

There’s a whole chapter devoted to ideas about how the future might work along these lines. We discuss the potential role of Citizens Assembles as a model for self-government, moving beyond capitalist types of ownership to co-operative models as a basis for a sustainable economy. The concept of social licence could transform the one-sided, extraction-only relation with nature and become the basis for meeting the challenge of climate change (which the present state has virtually abandoned). 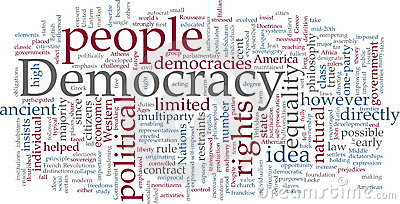 If you accept the basic premise of our book, it raises the biggest question of them all – how is this going to be achieved? The authors claim no sole wisdom in this area. Instead, the last chapter opens up a discussion on why an organisation is needed to co-ordinate this momentous change and what form such an organisation could take.

In our view, the economic and political crisis is a global phenomenon, affecting every country and government. Brexit and the election of Trump are seismic events which not only reflect this upheaval but also take on an unpredictable life of their own. As Marx, drawing on the dialectic, wrote “all that is solid melts into air” and we come face to face with the real conditions of life.

We ask if the transition to a real democracy can be achieved through, for example, a spontaneous mass movement and whether occupying spaces can “edge capitalism out”. Drawing on recent experiences in Greece, the Arab Spring, Occupy and the May 15 movement in Spain leads us to suggest that a democratic revolution has to be organised in some form or another or it won’t succeed.

In the end, it’s about power – who has it and how the majority can get their hands on it. Clearly, trying to replicate the organisational forms of the past like political parties – either of the social-democratic or revolutionary kind – is not a model for launching the Real Democracy Movement as an organisation because the world has moved on.

“The crucial motivation should be the desire to find ways to work together with a diverse set of outlooks while at the same time being able to act decisively for the common purpose of developing a real democracy. So, perhaps the most effective way forward is above all to ensure a democratic approach and mechanisms within an organisation that welcomes maximum debate and accountability combined with unity in action. This includes understanding the need to respond quickly to rapidly changing situations,” we write.

“The RDM must work out a structure that is itself democratic. That may seem axiomatic, but the challenge is to create an organisation where decisions are taken democratically and the rights of dissent and factions are protected. There are many models to learn from and a priority will be to adopt a suitable structure. The development of a determined but flexible and non-sectarian movement that models the kind of democracy it wants to build is a big challenge.”

* You can download Democracy Unchained for free, or buy a hard copy for the modest price of £3. You can also comment on the different sections via the website.