The case for a democratic revolution

The RDM has thrown down a challenge for supporters to make a personal review of where we are politically in the UK in these tumultuous times and to write 10 simple ideas for real democracy. They will be made into a manifesto-like synthesis for the RDM in the next period. It will be published widely, including distributing as a flyer at the Labour Party Conference in Brighton from 24 September.

1  The present political and economic system prioritises and serves powerful corporate and financial interests and not those of the majority.

2  Therefore the system cannot be regarded as democratic in a meaningful way, as is claimed by the ruling elites and others who endorse or support the status quo. 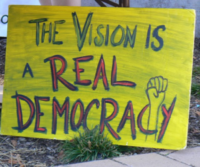 Towards a different future

3  The capitalist type of state that enforces existing political, economic and social conditions at national and local levels has failed society in a number of respects by presiding over

– gross inequality
– austerity, leading to the elimination and undermining of essential public services
– a housing, education and public health crisis
– attacks on democratic rights such as access to justice
– runaway climate change
– the demonisation of minority communities
– a militaristic foreign policy which makes UK citizens vulnerable to random terror attacks.

4  Significant sections of society in different parts of the UK have in effect rejected the status quo, in particular

– in the 2014 independence referendum in Scotland
– the vote in favour of leaving the European Union, creating a crisis for the state
– the massive increase in Labour Party membership as a result of Jeremy Corbyn’s leadership election campaigns
– the backing for Corbyn in the 2017 general election.

5  The growing desire and aspiration for substantial change cannot be fulfilled through Parliamentary procedures and occasional general elections alone.

6  Real democracy and self-determination will be achieved when active citizens transform and remake our present forms of rule and power.

7  Their aim should be to build a democratic system that allows the majority to decide what’s best for their communities, workplaces, towns, cities, regions and countries.

8  Ruling political and economic elites will not voluntarily give up power and control in favour of the sovereignty of the people even though the UK’s constitution or system of rule is clearly broken.

9  Local Assemblies, conventions on the constitution, strikes, occupations and campaigns can, if coordinated and focused on creating a real democracy, challenge and replace the present undemocratic power.

10 A transition through a democratic revolution would undoubtedly create the conditions for developing collaborative solutions to the major questions facing society in UK and globally.

About the Author: Philip Wade