The power and the potential of the social movement behind Corbyn 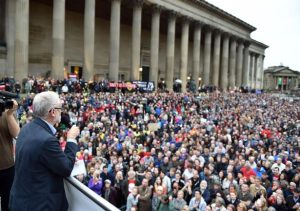 As voting gets under way in the contest for the Labour leadership, which is almost certainly going to result in the re-election of Jeremy Corbyn, it’s worth reflecting on the astonishing changes that have swept the party since the 2015 general election.

Together with the huge rallies Corbyn has been holding – 5,000 turned out on a Sunday evening in Kilburn, for example – they represent a burgeoning social movement that has shaken the political establishment and the mainstream media to the core, with a potential to inspire substantial change.

In reality, if not in practical terms, Labour is effectively split. The bulk of the membership seemingly rejects the majority of the Parliamentary Labour Party (PLP) who led a half-baked coup against Corbyn that resulted in the new leadership contest. The trade unions have by and large also sided with Corbyn. Momentum has grown into a powerful force alongside Corbyn.

It’s impossible to see how a reconciliation is possible. Owen Smith, the other leadership candidate, has already said he would not serve in a new Corbyn shadow cabinet, for example.

In 2014, Labour’s membership was 190,000; today it has more than doubled to 515,000 – making it the largest political party in Europe. The surge began after Ed Miliband stepped down after losing the 2015 election and Corbyn won himself a position on the subsequent leadership ballot.

Most undoubtedly joined so they could vote for Corbyn while tens of thousands more became eligible to vote through a cut-price scheme that Miliband had introduced aimed at weakening the power of the trade unions in a leadership election. How he must regret that manoeuvre!

Although the party’s National Executive Committee blocked 130,000 members from voting this time by declaring only those who had been members longer than six months could participate, their efforts were more or less cancelled out when in just 48 hours, 129,000 people paid £25 each so they could have a vote.

Corbyn’s re-election would be a defeat for the right-wing and a rejection of the ‘sovereignty’ of the PLP, which has been the basis of Labourism since its foundation. The PLP has always claimed the right to decide what’s best, ignoring conference decisions when it wanted to and generally ruling the roost.

This was the compromise made when Labour’s approach was formalised over a century ago. It was essentially a rejection of a revolutionary road to socialism in favour of parliamentarism and legislative reform. As this historic compromise between the membership and the PLP is now broken, the implications are far-reaching both inside and outside Parliament.

In practice, the split has taken place and is the consequence of a mass social movement electing and then re-electing Corbyn demanding a ‘different politics’ to those practised at Westminster. The PLP is now isolated from the party itself, which makes their position untenable and the election of Corbyn supporters to the NEC has weakened their grip on the bureaucracy.

Whether the PLP majority make a formal split or not is speculation. However, whatever future they have clearly lies outside of the present Labour Party, which is effectively no longer Labour but a movement for change in and outside of Parliament.

Corbynism has to be seen in the context of the social movement that arose during the referendum campaign for Scottish independence and the vote to leave the European Union driven by millions of workers ‘left behind’ by corporate-driven globalisation.

All these movements represent, in their different and contradictory ways, a break with the Westminster-centred market state and in the case of the EU, a rejection of the present form of globalisation based on low wages, flexible labour, unregulated markets and the movement of capital.

This phenomena is also represented in countries like Spain, Ireland, Greece, Portugal, France and in the United States. Although the form is not always ‘progressive’, it is nevertheless a real loosening of the grip of the old structures, parties and capitalist state institutions which in some cases have dominated for a century.

The movement to re-elect Corbyn is also about something else – the death of two-party politics where one party takes over the management of capitalism from the other. The failures of Milibandism and the electoral crisis after the last election, the rise of UKIP and the SNP leading to a crisis of working class representation in northern England, Scotland and Wales, are part of this process.

The cause of this lies deeper still, in the subjugation of democracy by the corporations and the financial institutions. Sovereignty lies not with Parliament but with extra-parliamentary forces that dictate to nation states and their institutions.

This is the essence of the crisis of democracy which is ultimately pushing the Corbyn phenomena. So it’s heartening that in a statement as voting began, Corbyn pledged to ‘extend democracy across Britain’, including a commitment to a ‘radical overhaul of the constitution’. He said:

“We will support radical devolution of power to local councils, regions and nations, in consultation with party members and local people; replace the House of Lords with an elected second chamber; end the ‘revolving door’ corporate grip on politics and the civil service; and create a new role for citizens’ assemblies in shaping political accountability for the future.

“We will give people a real say in their local communities, through democratic participation in budgeting, online democracy and control of local services; full transparency in public decision-making and contracts with private companies; and a citizens’ right to challenge the outsourcing and privatisation of local services through referendums.”

Corbyn added that “we need nothing less than a democratic revolution in our politics, communities and workplaces”. The question is, how is this revolution to be carried through? Corbyn’s victory will be a defeat for the right-wing but not of the right-wing because they represent a strand of capitalist thinking and interests within the labour movement. Defeating the right-wing requires an attack on capitalism itself.

For Labour under Corbyn to have any possibility of success at a general election, it will have to base itself on this mass movement and the disenfranchised working class in different parts of the UK, giving it a new perspective and programme.

Where can the extra-parliamentary movement go? What is its role? It needs a perspective which is directed against the status quo of both globalised capitalism and a political system that is a sham democracy incapable of representing the interest of the majority. Inequality is not simply the result of the policies of successive governments but a consequence of the demands of the system itself which has called the political tune. This system is in a global crisis and there is no return to the pre-crash growth levels. As a consequence, the system cannot possibly provide the resources for a renewed period of reformism or of state spending on a massive scale.

What is needed in this situation, irrespective of what the right-wing chooses/is forced to do? For Labour under Corbyn to create the possibility of defeating the Tories at an election, his leadership will have to:

The Real Democracy Movement should actively support those in and around the Labour Party who back Corbyn and John McDonnell. Ultimately, however, we cannot succeed without a perspective for transcending the present state and re-imagining democracy in new ways that take us beyond capitalism. That’s the basis for a successful 21st century democratic revolution.