The pay claim of 3.9% + £800, made by an alliance of unions for the 1 million NHS staff, adds another intractable problem to the chaotic government of Theresa May, but it also puts the leaders of the trade unions on the spot. They might have to lead a fight for the first time in many years which would bring them into direct conflict with the government and the state.

It is not disputed, even within the Tory Party, that the wages of most public sector workers have fallen in real terms by £4,000-£7,000 a year since 2010, and now that inflation is running at about 3% (nearly 4% according to the Retail Price Index), it has become impossible for the union leaders to sit on their hands. 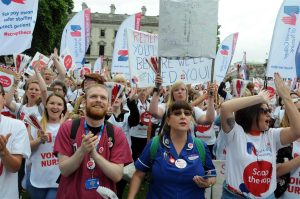 Nurses on a recent protest outside Parliament

A 5% pay increase for all public sector workers – which was the figure constantly mentioned at the recent TUC Congress –  would cost about £9bn. The claim, if granted in full, will come nowhere near to restoring their previous standard of living, but it is a start.

The government appears to be playing for time. It has agreed a 2% pay rise for the police and a 1.5% rise for prison officers, but there is little or no new money in this offer and in any case it has been rejected by the Prison Officers Association (POA).

Several unions including the POA, the Public and Commercial Services Union (PCS) and the University and College Union are committed to a ballot to determine if their members will support strike action, and others are likely to follow.

If it comes to a confrontation, the public service workers are unlikely to be able to win on their own. The Tory government stands for the privatisation of the NHS and the other public services, though of course ministers cannot admit it. They will see this as an opportunity to set up the NHS to fail, to discredit it in the eyes of millions and then to privatise more and more bits of it. 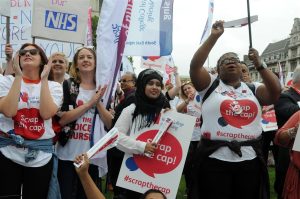 Past governments, and not just Tory ones, have been finding ways of letting the corporations take over the provision of public services for more than 30 years – from the building of new hospitals through exploitative PFI schemes, to the privatisation of the probation service and countless other services. They have even begun the privatisation of education through the creation of business-led academies and so-called “free schools”.

Trapped as they are between the organised working class demanding an end to austerity, the imperatives of the economic crisis after the 2008 crash, and their nightmare scenario of  a Jeremy Corbyn-led government, the minority Tory government is in a tough spot, but it is hardly going to throw in the towel.

The state exists to uphold the system, to make sure that any threat to capitalism and the networks of power underlying it are quickly derailed – by whatever means, as was shown in the 1984-5 miners’ strike.

The main lesson of the strike was that it is not possible for a single section of workers, however powerful and however popular, to win against a strong government with the power of the state behind it. The miners were isolated and eventually driven back to work because the leaders of the other unions were not prepared to challenge the state.

However, this is a new period. May’s government is a weak one, a kind of second XI, severely divided, with a dithering, uncertain and unpopular prime minister. It is besieged with insoluble problems – Brexit, a debt-driven economy and a rising tide of anger from all parts of society.

The unions may be numerically smaller, but the government is making enemies within large and influential sections of the middle classes too, on a host of issues from the future of the arts, to the environment and education. 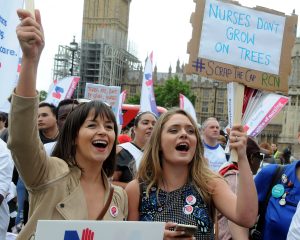 There is little room for manoeuvre on either side. The government is already under pressure because the state’s spending deficit is mounting while the sums due to the European Union related to Brexit remain unknown.

Union leaders are under enormous pressure to claw back earnings sacrificed on the altar of austerity, Some, like Unite’s Len McCluskey, are even talking of breaking the law to go ahead with strike action.

All the ingredients are present for a showdown with the Tories. If the union leaders are serious about their intent, they should co-ordinate their action and go beyond one-day actions which, in this situation, are totally inadequate.

The Tories could easily decide to call an election along the lines of “Who rules Britain”, as Edward Heath did in 1974 during a period of industrial action. So behind the pay claim is a chance to bring down the illegitimate May regime and propel Corbyn into Downing Street.  McCluskey and other leaders have to turn their words into deeds – pronto.

About the Author: Peter Arkell